Tyler the Creator, Bad Bunny to headline 2022 Made in America lineup

Lil Uzi Vert also returns to the two-day festival on the Benjamin Franklin Parkway, along with Jazmine Sullivan

By Maggie Mancini
PhillyVoice Staff
Entertainment Made in America
from 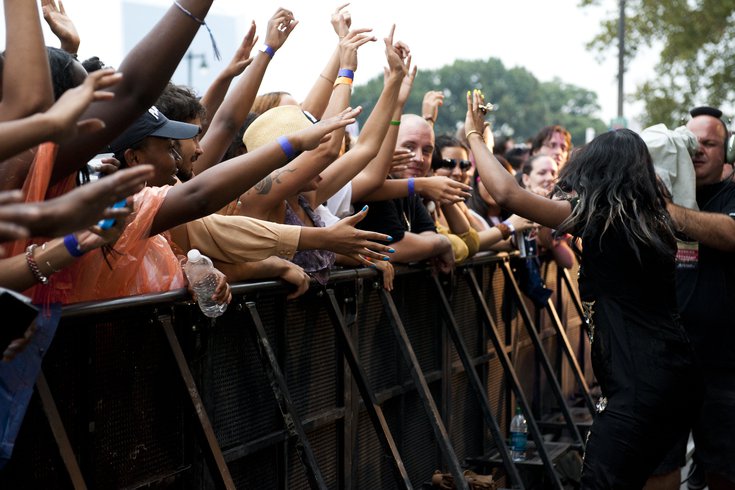 Tyler the Creator and Bad Bunny will headline the Made in America Festival on Sept. 3-4. The annual concert on the Benjamin Franklin Parkway is curated by Jay-Z and Roc Nation. It has occurred nearly every year since 2012, pictured above.

Rappers Tyler the Creator and Bad Bunny will headline the Made in America Festival, which returns to the Benjamin Franklin Parkway for the 10th time over Labor Day weekend.

The festival has taken place in the city annually since 2012, with the exception of 2020, when the COVID-19 pandemic caused its cancellation. Last year, Justin Bieber, Lil Baby, Doja Cat and Megan Thee Stallion were the headliners.

A post shared by Made In America Festival (@miafest)

Tyler the Creator is currently touring behind his 2021 album "Call Me If You Get Lost," which received widespread critical acclaim and commercial. The album was included on many end-of-year lists, including those by Complex, the New York Times and Pitchfork. It hit at No. 1 on the Billboard 200 and Billboard's Top R&B/Hip-Hop Albums charts.

He also took home the Grammy Award for Best Rap Album in April.

Bad Bunny will embark on his "The World's Hottest Tour" beginning in August. The Puerto Rican rapper was the most streamed artist across the globe in 2020 and 2021. His fourth solo studio album, "Un Verano Sin Ti," debuted at the top of the Billboard 200 chart after its early May release.

It was the second Spanish-language album to premiere at No. 1 on the 66-year-old chart. His 2020 album "El Ultimo Tour del Mundo" was the first.

The music festival is curated by Jay-Z through Roc Nation and generates up to $150 million in economic impact for the city each year, festival organizers said.

The Cause Village, which highlights charitable groups and organizations like Black Votes Matter, HeadCount, ACCT Philly and United in Community, will return this year, too.

Tickets are on sale now. The two-day, Tier 1 festival pass is $150, and the two-day VIP pass is $750. The VIP ticketing option includes special viewing and standing areas, an air conditioned lounge and cash bar, among other perks.

Earlier this summer, the Philadelphia Folk Festival will return to the Old Pool Farm in Upper Salford Township, Montgomery County from Aug. 18-21. Performers include Michael Franti & Spearhead, Punch Brothers, Sarah Jaraosz and Watchhouse. Tickets are available for as low as $60 per day.

The Firefly Festival returns to The Woodlands of Dover International Speedway from Sept. 22-25 for a weekend-long celebration. Halsey, Dua Lipa, Green Day and My Chemical Romance are set to headline.

Made in America Festival