Mailbag: Should the Eagles treat Week 17 like a preseason game? 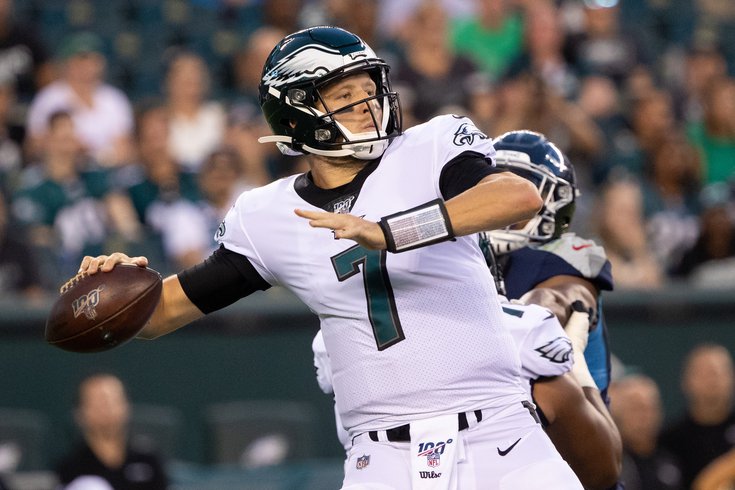 Question from It's the offseason, right?: Is there any valid reason why the game day roster for this week 17 game shouldn't resemble a preseason game?

As we noted in our "Eagles should tank Week 17" story, in addition to the Eagles benefiting from a loss in terms of draft position, the team would also be crazy to play anyone of significance who might otherwise play through an injury, or anyone the team might have interest in trading this offseason. Keep those guys in bubble wrap.

When the Week 17 injury report was released, it was revealed that the Eagles share this belief, as nine players -- most of them starters -- were ruled out. It also appears that Carson Wentz might not dress, and Nate Sudfeld could enter at some point for Jalen Hurts.

And Carson Wentz may not dress, and if not, Nate Sudfeld could play for Jalen Hurts in the second half if things get out of hand, from what I understand. https://t.co/5QY8BFcCBq

In other words, the Eagles are finally doing something right, though I guess that thing is "losing," which they already mastered this season.

Question from Ross: Any chance the Eagles try to trade Dillard? Or is his value so low due to injuries and looking bad that it's better to bring him back into camp?

It actually costs slightly more on the cap to trade him than to just keep him, so you'd have to get something worthwhile in return for him. I don't think there'd be much of a market for him, since as you said, he stunk as a rookie and he missed his entire second season.

If someone were interested (again, unlikely), I'm sure the Eagles would listen.

Question from Dustin0119: In your NFC hierarchy/obituary piece you mention the Packers drafting a QB in the first round and mentioned Rodgers responding with an MVP season. Eagles drafted a QB in the second round and Wentz responds by being the worst QB in the league. Can we assume that Wentz might not be emotionally tough enough to stay with the Eagles? We have the hardest fan base with high standards. Same might be said for Dillard and Agholor.

I can't really comment on Wentz's emotional toughness. Aside from his poor play, there hasn't been much evidence of that, like there was with Agholor and Dillard.

I do know that the during the 2016 draft process, the Eagles held mock press conferences in which Eagles employees grilled the quarterbacks that came in for visits, asking them difficult and/or intrusive questions. My understanding is that Wentz and Dak Prescott stood out positively. And we've sort of seen that from Wentz in press conference settings the last five years.

It's a fair question, though. His regression was extraordinary. There are probably a lot of reasons for that, and certainly, the selection of Hurts didn't help.

Question from TheGhostofNormVanBrocklin: I'm no NFL GM but when you start playing with the Over The Cap website there's a ton of players that either need to be cut, traded, or restructured just to get under the cap. I'm really fearing a return to some of the long term dark times I lived through as a kid.

One of the obvious contracts that the team was no doubt counting on restructuring this offseason was Carson Wentz's. They would be able to get back under the cap pretty easily if Wentz had a normal season and they still thought of him as their franchise quarterback.

Now that Wentz is no longer a restructure candidate, the team is going to have to pick the least of the evils in terms of which players they choose to "kick the can down the road." So when they re-do Brandon Graham's deal this offseason and commit to him for the next 3-4 years, and it seems crazy, that's why.

Question from Brian: Seems like Darius Slay has had a pretty decent year overall but I question whether that was good move. What do you think?

One of the biggest failures of the 2019 team was the inability to contain No. 1 receivers, and the deep ball. Slay absolutely helped fix those two glaring issues. So in that sense, yes, he improved the CB1 position pretty significantly.

In hindsight, if I'm the Eagles, would I rather have a 3 and a 5, extra cap space, and Slay just not be on the roster anymore? Yes.

Question from Ross: WFT have Steven Montez on the practice squad. You had mocked him to the Eagles as a late round pick but he went undrafted. Any chance we see him against the Birds this week?

It looks like Taylor Heinicke is going to start, and if Alex Smith is going to be inactive, then Montez will very likely be promoted to game day roster.

In other words, their likely starter has thrown 77 career passes, and their backup is an undrafted rookie free agent practice squad guy. So tanking will be a challenge.

Question from Hinkie: Hi Jimmy, which random Eagles player will come out of nowhere to have a monster game this weekend, hurt the draft position, and then after an offseason of hype absolutely stink next year? Do I hear a Quez Watkins?

Ah, yes. We'll call this the "Ryan Moats Award." Quez is a good one. My pick is RB Jason Huntley.

Question from Mig? Are you going to do a mock draft after this week's game and decide if we should trade Wentz or Hurts (or both), or stick with both?

Yes. It won't all be in the same story. I'll have a "Stay or Go: QB" post for sure, and depending on whether or not there is major news this week that needs to be attended to first, I'll have my "Eagles only mock draft, version 1.0."

Question from 2020 Please End: Jimmy, I've always wondered in stay or go series - should we as fans be voting what we *think* will happen or what we *want* to happen? I always vote what I think will happen which often doesn't line up with what I want to happen (like in the case of a Mr. Howie Roseman).

Ah, yes, I should probably make that distinction. In the article, I outline what I think should happen, and what I think will happen. The poll is your vote, as in, what would you do?