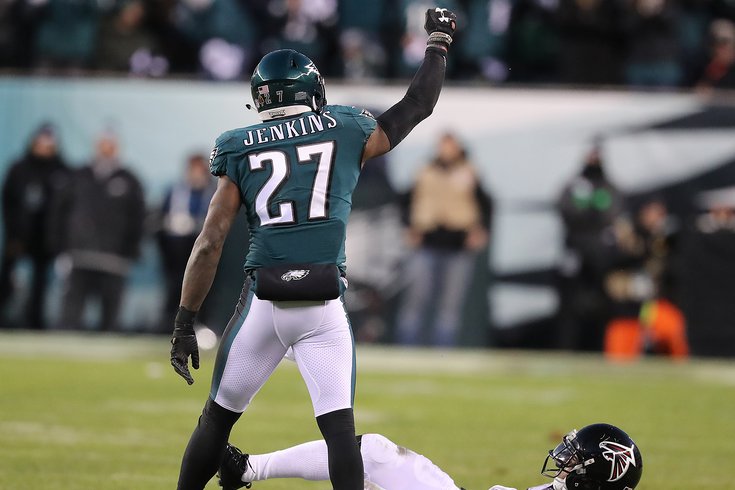 Former Eagles safety Malcolm Jenkins, a member of the team that won that won Super Bowl LII, will retire from the NFL. In addition to the Eagles, Jenkins played even seasons with the New Orleans Saints. Above is a photo from the 2017 Divisional Playoff Game.

Following Brandon Brooks' retirement earlier this offseason, another Eagles Super Bowl hero is hanging up his cleats. According to ESPN's Ryan Clark, Malcolm Jenkins is retiring from the NFL.

Jenkins signed in Philadelphia before the 2014 season after spending the first five seasons of his career with the Saints. He immediately became the soul of not just the Eagles' defense, but the entire team. He was an Iron Man in Philadelphia. Jenkins played in every game during his six years with the Birds, playing 100 percent of the defensive snaps in five of his six seasons in midnight green.

Jenkins was the perfect mix of durability, dependability, intangibles, football IQ and pure skill. He did everything for the Eagles' defense over the years, playing both safety positions, slot corner and linebacker while almost never leaving the field.

No time in Philly history had more heart than the 2017 Eagles and Jenkins was the driving force behind that. Leading the Eagles out of the tunnel in the Super Bowl with Meek Mill's "Dreams and Nightmares" blasting through U.S. Bank Stadium was an "OMG, they're really going to do this" moment on the most memorable day of nearly Eagles fan's life.

During an iconic day featuring so many huge plays that altered the course of the franchise's history, and, really, Eagles fans' existence, Jenkins' brutal hit on Patriots WR Brandin Cooks stands tall among them.

As Eagles fans get further and further away from the Super Bowl, fewer and fewer players from that game remain in Philadelphia and now some are leaving the NFL all together. "Heroes get remember, but legends never die" has rarely felt more true than when giving that billing to the members of that Super Bowl squad.