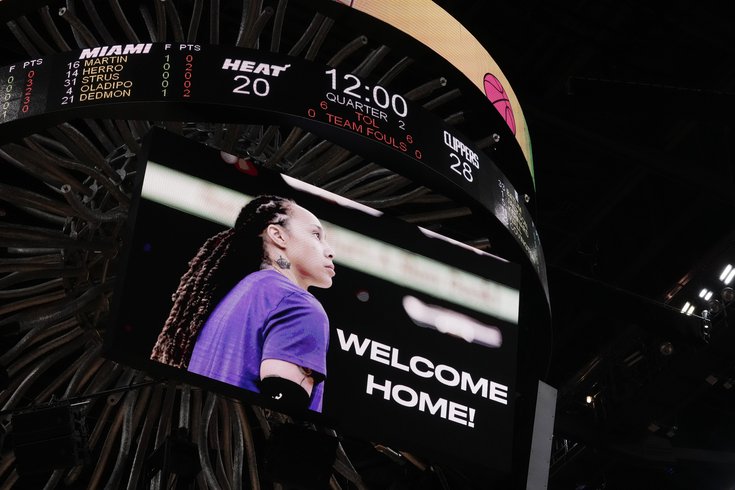 Brittney Griner was released from a Russian prison on Dec. 9. 2022, as part of a prisoner swap. Marc Fogel, of Pennsylvania, who has been jailed in Russia since August 2021 for similar marijuana-related charges remains in custody.

WNBA star Brittney Griner arrived back in the United States early Friday morning, following her release from a Russian prison, ending a diplomatic standoff that began with her arrest in February. U.S. officials negotiated Griner's release as a part of a prisoner swap that freed international arms dealer Viktor Bout, an ex-Soviet military translator who had been jailed in the U.S. for the last decade.

Griner, 32, was arrested on drug smuggling charges at a Moscow airport for carrying vaporizer cartridges that contained hash oil. The Phoenix Mercury star, who was traveling to play in a Russian basketball league during her offseason, has a medical marijuana card in the U.S., but cannabis is illegal in Russia. She pleaded guilty in July and had been sentenced to nine years in prison, setting the stage for high-stakes negotiations against the backdrop of Russia's invasion of Ukraine.

The high-profile prisoner exchange has drawn attention to other U.S. citizens who remain jailed in Russia, most notably retired U.S. Marine Paul Whelan. Nearly four years ago, while attending a friend's wedding in Russia, Whelan was charged with espionage and later convicted and sentenced to 16 years behind bars. Whelan and the U.S. State Department have denied Russia's claims that he was a spy, maintaining that he is wrongfully detained.

A lesser-known Russian prisoner is Marc Fogel, a teacher from the Pittsburgh area who was arrested in August 2021 when he was found carrying a half ounce of medical marijuana into Russia. The 61-year-old husband and father of two had been prescribed cannabis by a doctor to treat chronic pain stemming from surgeries on his back, shoulder and knee.

🧵This is Marc Fogel. You likely know about WNBA star Britney Griner, but Marc’s family wants you to know about him, too. He’s also detained in Russia—for having medical marijuana in his luggage. He was sentenced to 14 years in a max security penal colony. pic.twitter.com/XwQIxZpwE0

Fogel, of Oakmont, Allegheny County, previously taught at a public middle school in Maryland, but after meeting his wife, Jane, the couple embarked on a life of international teaching jobs that took the family to places like Colombia, Venezuela, Malaysia, Oman and most recently Russia. Fogel had been teaching there for 10 years prior to his arrest while attempting to re-enter the country.

In June, Fogel was sentenced to 14 years in prison in Russia. He had transported 14 marijuana vaporizer cartridges and cannabis buds into the country, thinking he could escape detection by keeping them in his suitcase, shoes and a contact lens case.

On Thursday, as news of Griner's release became official, U.S. Sen. Bob Casey commended the diplomatic effort but urged U.S. officials not to forget about Fogel.

"Mr. Fogel suffers from severe medical conditions and his family fears he will not survive his 14-year sentence in a hard labor camp," Casey said. "The Biden administration, and the nation, cannot forget about Marc. Like Ms. Griner and others, Marc deserves to see his family again."

In August, Casey and several of his Senate colleagues sent a letter to U.S. Secretary of State Antony Blinken pleading for Fogel to be designated as "wrongfully detained," a classification that places higher priority on securing his release.

"Such a designation will provide the warranted level of support to Marc Fogel's family after a year of communication with Mr. Fogel only via mail and, most importantly, will require the U.S. Special Presidential Envoy for Hostage Affairs to secure Mr. Fogel's freedom," the letter said. "We cannot allow Mr. Fogel to be used as a political pawn by Vladimir Putin."

Jane Fogel, who told the Washington Post in July that she sometimes feels like a "widow," said the family is fearful that Marc's case is not getting the attention it needs to build momentum for his release.

"There's a sinking feeling in the pit of my stomach that Marc will be left behind," Fogel said. "It's terrifying. I would hope that President Biden and especially First Lady Jill Biden, who is an educator, realize the importance of including Marc in addition to Brittney Griner and Paul Whelan."

Though the families of Griner, Whelan and Fogel have all expressed support for one another's journeys, Fogel lamented in one letter that he was not being treated equally. He had heard that negotiations were underway for a prisoner swap involving Griner and potentially Whelan.

"That hurt," Fogel wrote to his wife. "Teachers are at least as important as bballers."

U.S. officials said they tried bring Whelan home as part of the prisoner swap for Griner, which was completed Thursday in the United Arab Emirates, but Russia refused to budge on Whelan without larger concessions being made. That could be another Russian prisoner in the U.S. or something related to American involvement in the war in Ukraine.

"This was not a choice of which American to bring home," Biden said Thursday. "Sadly, for totally illegitimate reasons, Russia is treating Paul's case differently than Brittney's. And while we have not yet succeeded in securing Paul's release, we are not giving up. We will never give up."

Fogel was not mentioned by name during the announcement of the Griner swap.

In a call from the penal colony where he's been detained, Whelan told CNN he was happy for Griner and her family, but "disappointed" because he was given the impression he would be part of the prisoner swap. "I don't understand why I'm still sitting here," he said.

U.S. officials said they had been willing to make a more substantial offer for Whelan's freedom, including the potential release of a Russian spy, but Fogel's name has not come up in negotiations.

In July, the state department told the Washington Post that Fogel's case is being considered, but did not provide any additional information. On Thursday, White House Press Secretary Karine Jean-Pierre was asked if Fogel's status could be changed to "wrongfully detained," given the similarities to Griner's situation.

"Any specifics on Marc Fogel or others, I would refer you to the State Department for more information on those specific cases," Jean-Pierre told a reporter in Washington. "Every case is different."

Ahead of Griner's arrival in San Antonio on Friday morning, her family acknowledged the struggles of Whelan and other American prisoners in Russia.

"We sincerely thank you all for the kind words, thoughts and prayers — including Paul and the Whelan family who have been generous with their support for Brittney and our family during what we know is a heartbreaking time,"  the Griner family said. "We pray for Paul and for the swift and safe return of all wrongfully-detained Americans."

In an interview Thursday with NBC News, Anne Fogel, Marc's sister, said she remains hopeful that her brother will be released, but that his absence weighs heavily on the family.

"It's distressing. Marc has been in prison for 16 months now," Fogel said. "This is the second Christmas that he's missed. I have a 93-year-old mom who really would like to see her son."

The family has asked Griner to assist in ongoing efforts to bring Fogel and others home.

"I would like to welcome Brittney Griner home," Fogel said. "I would like to ask her to please use the giant platform that she so deserves to help get Paul and Marc out of Russia."