Delaware coach Martin Ingeslby is the son of a Villanova legend and facing the Wildcats in the tourney. 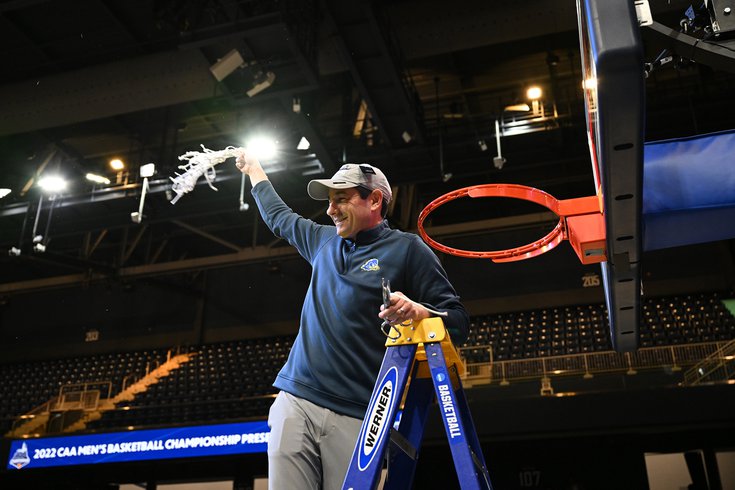 There are pictures, many, many pictures of Martin Ingelsby as a baby, as a kid, wearing Villanova gear. Sweatshirts, jerseys, caps, anything with the Villanova ‘V’ on it. Ingelsby was in it. His name “Ingelsby” hangs from the rafters of Finneran Pavilion, where the Villanova Wildcats play their home games. Three of his four siblings are Villanova graduates, including his brother, Brad, the award-winning writer and creator of the HBO smash hit “Mare of Easttown.” His uncle, Ed Hastings, played for Villanova. His brother-in-law, Baker Dunleavy, now Quinnipiac’s head coach, was a Villanova assistant.

His father, Tom, is a Villanova legend who’s in the school’s Hall of Fame, was part of the Wildcats starting backcourt with Chris Ford that lost to UCLA and iconic coach John Wooden in the 1971 NCAA championship game. Tom’s No. 24 hangs from the roof under his name.

On Friday for 40 minutes starting at 2:45 p.m. at the PPG Paints Arena in Pittsburgh, Villanova, the basketball team Martin Ingelsby revered, will be the enemy. That’s the way Martin, in his sixth season as Delaware’s head coach, will see it when the No. 15-seed Blue Hens (22-12) face No. 2-seed Villanova (26-7) in the opening round of the NCAA Tournament.

Ingelsby, a 1997 Archbishop Carroll graduate who finished as the school’s all-time leading scorer (1,425 points) and a three-year starter at Notre Dame, has led the Blue Hens to their sixth NCAA Tournament appearance in program history and third in the last 23 years (2022, 2014, 1999, 1998, 1993, 1994) after winning the Colonial Athletic Association (CAA) Tournament.

Maybe that changes on Friday.

Upsets have been known to occur in the opening round of the NCAA Tournament. What better person to do it than Ingelsby against what only be described as extended family wearing a different shade of blue against a local iconic coach, Hall of Famer Jay Wright.

It will just be a strange feeling, since Ingelsby comes from a “Villanova family,” whose name just happens to hang from Villanova’s rafters. Tom would take the kids to games, park the car at the Radnor Hotel and take the yellow school buses over to the Pavilion to see the Wildcats. 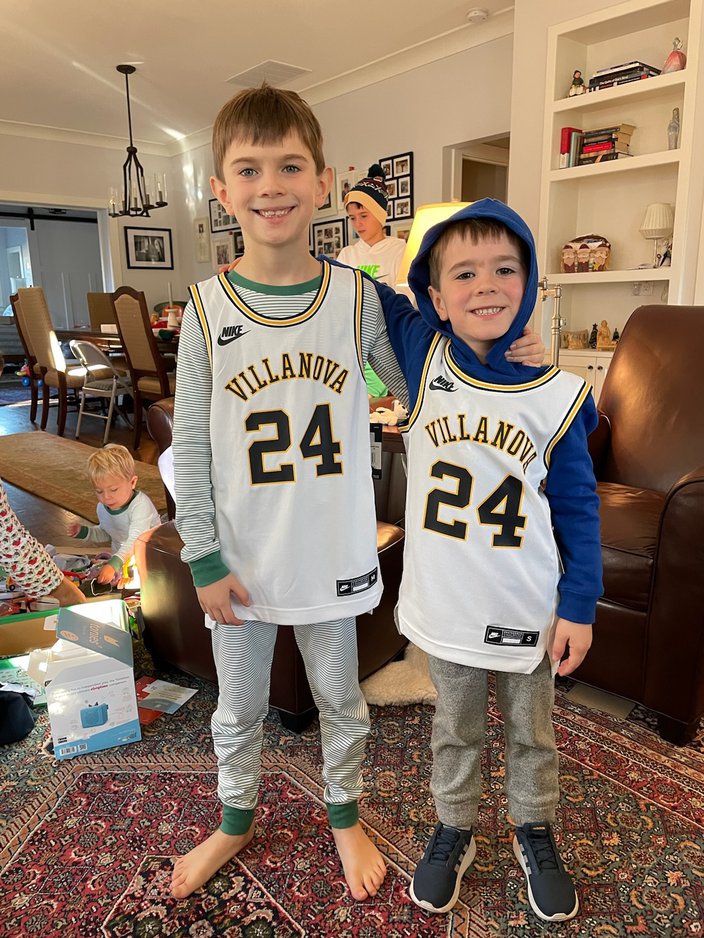 “Ever since I can remember I was always around the game of basketball and sports were a big part of my childhood and when you have a father who had success at the Philadelphia high school level, and obviously at Villanova, who is in their Hall of Fame, you learn about Villanova basketball pretty quickly,” Martin said, laughing. “Growing up, I was a diehard Villanova basketball fan. We used to go to all the home games with my dad when we were younger. That was something I enjoyed so much. I remember being in front of the TV in 1985 when I was six watching them win the national championship.

“Villanova was my team. My dad played there. My Uncle Ed (Hastings) played there. One of my dad’s best friends, Mike Daly, God rest his soul, he was one of my dad’s best friends, played at Villanova with my dad, and Mike’s son, Mike Daly Jr., is my best friend to this day, who’s like a brother to me, and my brothers, Brad and Tom, and my sister, Christine, all went to Villanova, so the ties to this place are long. Villanova basketball has really been a part of my life.

“I’m a huge Jay Wright and Villanova fan, except the days when they play Delaware. Jay does it the right way. He gets get good kids who work hard, and I couldn’t be prouder of what they do there. They’ve been a model program for me to try and replicate here. My dad is texting me the scouting reports all the time (laughs). He’s really excited about this. I know his phone has been blowing up, with calls from everyone. But my dad is one of the most competitive people I know, and he’ll be fired up and ready to go for the Blue Hens.”

In his six years at Delaware, Martin, 43, has a 95-86 record (.525), including two 22-win seasons in the two of the last three years. He has the program heading in a good direction, and he’s plucking talent from the Philadelphia area, whose roots he knows so well. Junior guard Jameer Nelson Jr., son of St. Joe’s legend Jameer Nelson, has excelled at Delaware (13.7 ppg), leading the Blue Hens in scoring. Neumann-Goretti’s Kevin Anderson, a senior guard for the Blue Hens, is one of the team’s leading scorers (10.8 ppg), as is 6-9 sophomore forward Andrew Carr (9.9) out of West Chester East.

“I’m proud of the program that we’ve been able to build over the last six years here,” Martin said. “It’s taken a lot of hard work to get where we are. Obviously, this breakthrough moment can continue to elevate our basketball brand and this university. You don’t ever get satisfied. But for a team like ours, and a program like ours, you must be good for three days in our conference tournament, because we only get one bid. We’re going to ride the wave this wave and enjoy this moment.

“I’m really proud of these guys. I wanted our team to experience March madness.”

“Villanova didn’t give me much love (coming out of Haverford School),” said Nelson, who may carry a little leftover angst towards Villanova from his father, Jameer Sr. “We have a lot of people showing us a lot of love on social media. We felt like no one thought we could win the (CAA) tournament. We’re playing together and everyone is playing well in their roles. We’re playing great team defense. They play very similar to UNCW (UNC-Wilmington), but Villanova is obviously better.

“Those guys are going to try and drive us, and post us up, and we’re going to have to guard. We do respect Villanova. But we’re not afraid of them at all. We have a lot of guys on our team that have played against a lot of their guys in high school. We don’t view those guys like everyone else does. I’m super excited about this. My dad hasn’t sent me anything yet, but I have a good idea how he feels (laughs). It’s going to be a great game. We’re ready to be physical and we’re ready to be tough, and I’m sure they are, too.” 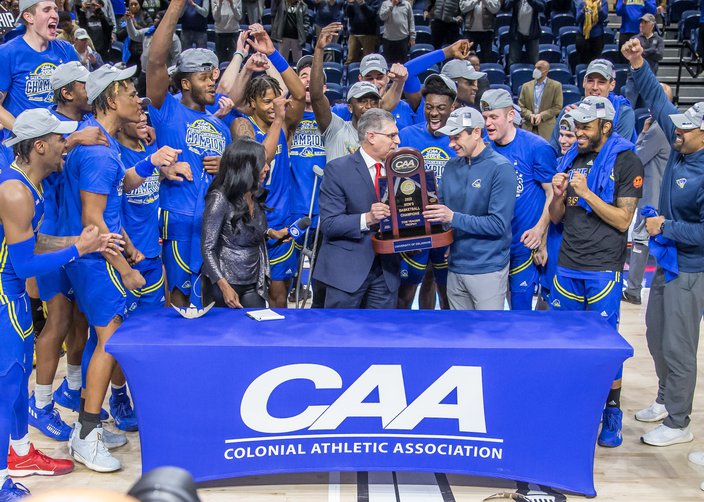 Tom Ingelsby and huge portions of the extended Ingelsby family will be coming out to Pittsburgh this Friday. Tom and Rose, Martin’s parents, began the week with a full plate. They went to Delaware to see Martin and his Blue Hens get selected in the tournament to play Villanova, then ran home in time to catch Brad win a Critics’ Choice award for a limited series on national TV accepting for “Mare of Easttown.”

“I’m a proud Villanova graduate, but I’m a proud father of his son,” said Tom, 71. “I love Jay Wright. He’s a great guy and a great coach. Every day of the year, except Friday, I’m a cheerleader for the Wildcats. I won’t be rooting against Villanova. I’ll be rooting for my son’s team. At the end of the game, if the Wildcats win, I’ll be right back on board looking for Villanova to win the national championship. I think Jay Wright runs the best college basketball program in the country. He recruits excellent kids. He coaches them up. They graduate.

“I’m very proud of Martin and what he’s done at Delaware. He’s built that program where he got a championship. My brother-in-law, Ed, is a professor at Villanova, and my son-in-law, Baker, coached under Jay. It’s Villanova everywhere. I’m very blessed. But this will be a little tough, because I’ll be cheering for my son and Delaware and I have very close friends who are with Villanova, but they all wish my son the best. This will be like a Big 5 game. It will be intense.”

Wright knows the intertwining connections. He also knows his Wildcats are running into a hot team.

“It’s cool for everybody else, the fans, but for us, they know us,” Wright said on Selection Sunday. “They’re comfortable with us. It’s a challenge, but there would have been another challenge with another team. That just happens to be the challenge for this team. I have watched (Delaware) and they’re really good. They’re an experienced team. They’ve got older guys and they’ve been together for a while. They fought their way through the (CAA). They were up there but they’re playing their best basketball team at the end.”

Martin knows the reality of the situation. Villanova is a 15.5-point favorite. The Wildcats and Wright carry national prominence. Delaware is a mid-major. Martin admits, he, his team and the program personnel may be the only ones who think the Blue Hens have a shot. Well, them, and Martin’s vast family and friends.

But this is a game that could be played in the hotbed of the Palestra — and a dangerous game for Villanova. Perhaps no first-round opponent knows the Wildcats better than Ingelsby and certainly not better than 6-10 graduate student transfer Dylan Painter, who played for Wright and is very close numerous former teammates.

“I have immense respect for Jay Wright and I’m trying to keep my team as loose as I can,” Martin said. “I like our personnel and I like how we ended the season. We have nothing to lose. That’s the great thing about this. We’d like to put a little game pressure on with the arena rallying around the Blue Hens as the underdog and see what happens. We’re going to have guys on the court who understand Villanova basketball and that brand, that machine. We’re going to be honored to be on the court with them. But as we step between the lines, we’re going to be ready to compete our asses off.

“I’ll also say this. I know my guys. They’re not afraid of them. One of their guys is now one of our guys. Dylan Painter knows the Villanova culture and how they play as well as anybody. Our guys are ready for this big stage and big moment. They worked hard and are ready for this fight. And I have to say this, Jay has been so great to my dad through the years and he’s fabulous with the guys who made that program great.”

Wright was still at Hofstra when Martin was playing at Carroll. Steve Lappas, who Wright took over for, was the head coach of the Wildcats then. Ingelsby had many big-time programs recruit him hard — except one.

“Lappas never offered me a scholarship,” said Martin, who went to a better program at the time, Notre Dame, where he shined and graduated with a degree in marketing. Martin stayed in South Bend as part of head coach Mike Bray’s staff for 13 years, the last seven as an assistant coach. “Notre Dame was a better situation for me. At the time, it was a bitter pill to swallow (that Lappas didn’t offer a scholarship). My dad didn’t like it. But I wouldn’t be where I am if I didn’t take the course I did.

“We’re excited and loose. We have to defend, and we have to be tough. We know they’re going to come after us. And after the game, I’ll be a Villanova and Jay Wright fan again. For 40 minutes on Friday, I won’t.”