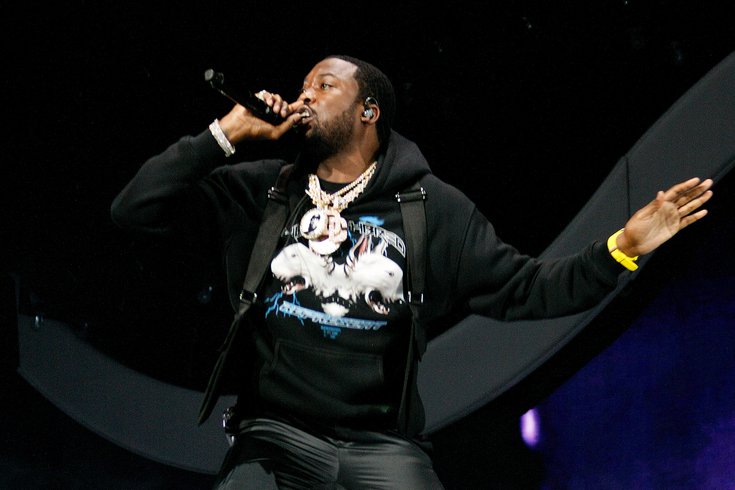 Philadelphia native rapper Meek Mill performed a sold out show at Wells Fargo Center on Saturday in celebration of the 10th anniversary of "Dreams and Nightmares."

Meek Mill performed a sold out show last night in his hometown, complete with a lineup of star-studded guests.

During his one-night-only "Meek Mill + Friends Dreams and Nightmares 10-Year Anniversary Concert" Saturday night at the Wells Fargo Center, Mill brought out fellow rapper Rick Ross for a few songs, putting to rest rumors of a feud between the friends and collaborators.

Meek Mill and Rick Ross perform together for the first time since their recent beef pic.twitter.com/Np3wwjiCOt

In 2011, Mill signed with Maybach Music Group (MMG), Ross' label, under which he released "Dreams and Nightmares." Through the years he has continued to collaborate with artists on MMG including Ross.

Feud rumors started in May of 2021, when it was reported that Mill allegedly banned his label boss from his birthday party in Miami, and was looking to leave MMG. As recently as last week, fans speculated the feud was ongoing when Mill alluded to being underpaid throughout the years by those overseeing his career, a category that Ross falls under.

Fans online were thrilled to see Mill and Ross squash the feud rumors.

Philly is thankful for @MeekMill 🙏🔥 pic.twitter.com/WtRqdLDBD0

Meek Mill and Rick Ross squashed their beef and performed together in Philly last night 🔥🔥pic.twitter.com/k9Q3Xr9lPg

No More Beef 💯 Meek Mill & Rick Ross Settle their Differences and Perform at a Show Together in Philly😤🔥🎤 pic.twitter.com/7KC4QKMcrR

@MeekMill and @RickRoss on stage is all we love to see ✌️

Dope to see y’all on the same stage again!!! @MeekMill @RickRoss Made me smile! We need some new music for the culture! #WeStrongerTogether

Meek brought Rick Ross out that was dope @MeekMill

Mill performed his own fan-favorite songs like “Respect the Game” and “1942 Flows,” as well as material from his latest mixtape, "Flamerz 5."

After the concert, Mill tweeted about the healing power of the show.

Before I go to sleep ima pray for that whole building it was a lot of move in there tonight regardless of what pain the city going thru!!!!

The concert celebrated the tenth birthday of the Philadelphia underground rapper-turned-Grammy-nominated musician's debut album, "Dreams and Nightmares," which was released on Oct. 30, 2012.

"Dreams and Nightmares" debuted at number 2 on the Billboard 200, selling 165,000 copies in its first week. The album included features by Ross, Drake and Mary J. Blige and hit songs like "Amen." Ten years later, the album has over 650 million streams.

The album's intro title track became a Philadelphia anthem during the Eagles' victorious Super Bowl run in the 2017-2018 season, similar to this year's National League champion Phillies' "Dancing On My Own." This season, Mill stopped by the Eagles vs. Cowboys game and the Phillies' World Series Game 5 to perform "Dreams and Nightmares" to hype up the crowd.

Mill released his latest album, "Expensive Pain," last October, and earlier this month he released the fifth installment of his mixtape series "Flamerz."

Besides being a celebrated musician, Mill is also an entrepreneur and criminal justice reform advocate. He is a co-owner of the sports apparel retailer Lids and CEO of the music label imprint Dream Chasers. As a co-chair of the REFORM Alliance, he also aims to advance criminal justice reform by eradicating outdated policies. He partnered with Jay-Z, Michael Rubin, Robert Kraft and others to launch the organization in 2019.

He may soon add another title to his many accolades. In an Instagram post last week, Mill hinted at creating his own music festival.