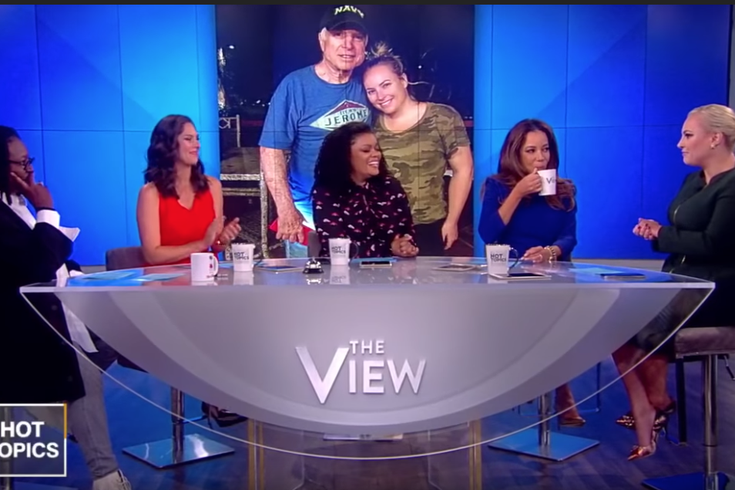 In an emotional opener, Meghan McCain returns to The View.

Meghan McCain rejoined the cast of "The View" Monday morning. McCain has been in mourning after the death of her father, Arizona Sen. John McCain, who passed on Aug. 25 after a long battle with cancer. McCain received a warm welcome from the audience that brought her to tears. She went on to thank the network, ABC, the show, as well as the American people for being "so kind" to her family.

"Everyone came out and celebrated him with love and it made me so inspired that the ideals that my father espoused in his career are the ideals of America, and I think there was a lot of talk about what died with him and I'm here today to tell you it didn't," she said.

"It is alive and well and I need us to remember that.”

"He believed in American exceptionalism. He believed America is the greatest country in the history of the world. He believed that when your candidate's opponent says something racist in a rally, you push back. That is John McCain and that is what America is.”

Her emotional gratitude was felt by all the co-hosts who went up to give her hugs as she gave each of them her own special thanks. She told stories of each one, such as when she cried on Whoopi Goldberg’s shoulder before the show –almost every day for a year – to the time she got drunk with new co-host and old friend, Abby Huntsman, when her dad was diagnosed. She shared when Sunny Hostin offered her hospitality and comfort when she needed it most.

"None of us agree at this table on very much when it comes to politics and the world, but we are all sisters here, supporting each other. This is what America should be," she said.

The co-hosts discussed McCain's eulogy with high praise. McCain mentioned that the eulogy was her father’s idea, noting she was the only woman to give a eulogy at his funeral.

"Raise strong women. Really, it is the only thing that is keeping me now is how tough he made me and he did that and I love him.”