Members-only dating app The League launches in Philly today. Are you worthy? 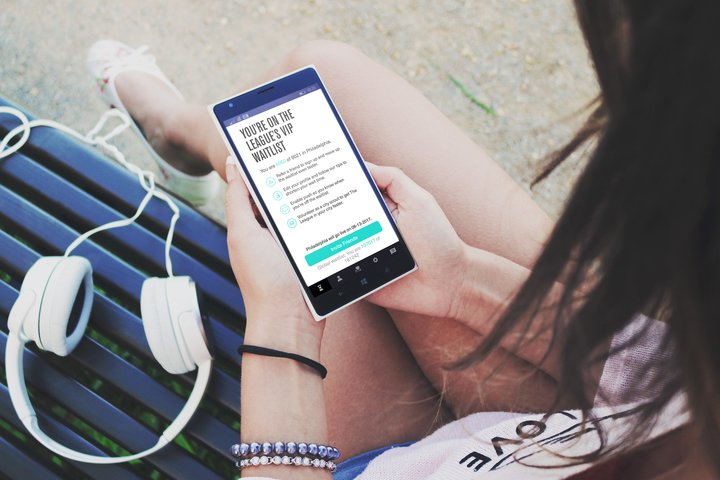 The members-only dating app The League, considered by many an elitist version of Tinder, launches today in Philadelphia.

For anyone who has spent more than a couple weeks on a dating app hunting for an enduring, meaningful romance, the Philadelphia dating pool can start to feel extremely small. As a city often lauded by locals for having a small-town, neighborhood-centric feel within a big city, that benefit is a double-edged sword as faces quickly become familiar and the number of potential partners dwindles after every failed date.

That’s why it came as a bit of a surprise when The League – a members-only mobile dating app that sifts through applications to hand-select the best prospects based on education, career, and a handful of other discerning qualifications – announced it had chosen Philadelphia as its next location, joining San Francisco, New York, Los Angeles, Chicago, Boston, and London as the next hotbed for successful, high-brow singles looking for partners of equal caliber.

Philadelphia is the first of 10 cities getting the app this summer, which will give fancy people from places like Atlanta, Miami, Denver, and, yes, Philly, the chance to be decisive in their dating choices and create a nation of what The League markets as “power couples.”

What’s more, the allure is working on people.

As of this writing, 9,568 Philadelphians are registered for The League. Of those, 2,001 will join the ranks as the app’s “founding class” when it goes live, and everyone else will be left waiting in line for their turns.

Meet Amanda, the CEO who was tired of swiping left

Like in most major cities, the use of apps like Tinder among singles in Philadelphia is poised particularly toward the hook-up culture and fosters far more male users than women.

The prospects, at least for women, don’t sound great either: A report from the New York Times in 2014 said women are likely to “swipe right” only 14 percent of the time – as opposed to 46 percent of men.

"This is not a place where you’re saying awkward things to people to get a laugh – do that on Tinder." – Amanda Bradford, founder of The League

Perhaps unironically, it was right around the time Tinder released those stats and other discouraging data that Amanda Bradford, CEO and founder of The League, put the wheels in motion for her own app.

After the end of a long-term relationship and some false starts using apps like Tinder and OkCupid, Bradford took matters into her own hands to find a date that had a good job, a good education, and who also wanted a partner just as successful in her own right.

“I created the app for selfish interests,” Bradford told PhillyVoice. The idea came to her in 2014 as she finished up her MBA from Stanford University.

“I was single, and it was during the Tinder revolution,” she said. “I had kind of always looked down on it; there was the stigma of online dating, and I kind of thought, ‘I don’t need online dating to date.’”

Nonetheless, as more of her friends and co-workers started adventuring into Tinder, Bradford followed. What she found wasn’t great, though. She wanted more information about potential matches before saying yes to dates; she also wanted to monitor her privacy so that coworkers and colleagues wouldn’t be stumbling upon her dating profile in the middle of a work presentation.

“I worked in finance, and I didn’t want all the finance bros to see me in, like, my Vegas party dress,” she said.

Even with more privacy, though, the actual types of dates Amanda found on the apps were not ideal, either.

“It was very clear they didn’t want a partner. They were looking for a support system. It was really hard for me to know whether a guy was looking for me to plug into his life and be his support system, or if he wanted to combine forces and have a relationship of equals,” Bradford said.

“I think it’s great that Philly’s being recognized as a city with as many quality professionals as there really are." – Erika Kaplan, of Three Day Rule

After several failed attempts at getting other apps to do this, Bradford – who holds a degree in tech and is a Google alumna – realized she could probably do it herself. After an initial 1,000 users got the app going during its first iteration in November 2014, several rounds of fundraising boosted the app with $2 million and a New York launch in January 2015. A year later, Los Angeles joined the mix.

Philly ranks No. 7 in The League’s list of the country’s top 15 power-couple-inducing cities, determined with data pulled from other cities where The League is already at work.

“The League used data from its successful League power couple matches in its existing cities to find variables that serve as predictors,” the company said in a statement. “Some of the datasets include, but are not limited to: user’s preferences data on the waitlist as compared to public census data, LinkedIn usage data as compared to Facebook usage data in said city, Higher Education rates, the density of the city, male: female ratio, etc.”

But what makes a couple a “power couple?”

Bradford breaks it down in two ways. “Obviously, having reached some degree of professional success, scheduling and finding time is one of the biggest challenges. That’s why doctors date nurses and businessmen date secretaries because they’re there and they have two hours of free time a day right in front of you,” she said. “So how do we expand the pool so that the crazy-busy ER surgeon can date the crazy high-flying lawyer whose flying across the country?”

Secondly is the equal sharing of responsibilities within the couple.

“Another way we define it is just sort of their perspective on their ideal relationship and splitting things 50-50 and not expecting certain jobs to fall on someone just because of their gender,” she said. “Be open-minded and progressive enough to question those things even if they’re from a very traditional family where the mom did the cooking and the cleaning and the housekeeping, they’re evolved enough to be like, ‘That doesn’t mean you have to do that, let’s talk about if you should do this, and let’s divide up the household chores,’ and can think about approaching something like that.”

For Philadelphia’s founding class of app-using love searchers, The League is capped at 2,001 singles.

Data about the app’s founding class shows of those registrants selected to get the ball rolling, 7 percent are University of Pennsylvania grads; 8 percent hold MBAs; 5 percent MDs, and 4 percent JDs.

More come from Center City – 12% – than any other section or neighborhood, followed by Manayunk at 10 percent. Four percent identify as LGBT. The average age is 28.

The male-female ratio is 45-55, and the influx of female applicants is pretty much always higher than that of males, Bradford said.

“We keep it 50-50 inside, but on the waitlist, it’s actually harder to get in as a girl than a guy,” she said. “Sixty-three percent of people on our New York waitlist are women.”

How to make it off the waitlist

At the end of the day, the basic usage of the app isn’t too different from what people are used to with apps like Tinder or Bumble. The real differences come in the streamlined information – including content from member’s LinkedIn profiles – and the concierge, your go-to helper who can give you profile tips and to whom users can report harassment.

“When designing The League, I looked at the communities that are best, that foster relationships most consistently, and the two that appeared over and over again were work and school,” Bradford said. “Those are the most curated institutions that exist – you could argue that they are the most elitist things in the world.”

“It used to bother me when we got called elitist, but it doesn’t anymore,” Bradford said. “It’s not just about pedigree. Maybe you went to community college or you dropped out, but then you started a business – that to me, that’s another expression of an ambitious person. So the reason we have a human review component is to make sure that it’s not elitist. To make sure we include the stories that don’t totally fit into something an algorithm could rank.”

This is not the first time an exclusive dating service found its way to Philadelphia. Last year Three Day Rule, a very pricey members-only matchmaking service, opened a Philadelphia branch. Three Day Rule matchmaker Erika Kaplan described the dating world of Philadelphia as a “hidden gem” full of interesting professionals. Since launching in May 2016, Kaplan admits the market was far bigger than expected.

“It’s filled with busy professionals,” Kaplan said. “It’s a city filled with academics who come here to learn and help the city and never leave. The job market is growing like crazy, and it’s a really amazing place for millennials, and a lot of our clients these days are in their early 30s.”

Kaplan also noted that the city’s reach to areas of South Jersey, the Pennsylvania suburbs, and Delaware help boost what is considered the Philadelphia dating market.

“There are so many people out there, but they’re not all condensed in Center City,” she said. “I think it’s great that Philly’s being recognized as a city with as many quality professionals as there really are. Three Day Rule has been blown away by response to our service here, and awesome professionals looking for new avenues to find their equals. People need more avenues to meet their equals, and The League launching is great for Three Day Rule.”

The hashtag used by League hopefuls attempting to boost their spot on the waiting list is usually #GetMeOffTinder, fueling into The League’s criticism that it’s just an elitist version of the dating app. You’re still swiping, but first someone else must decide if you’ll even get that right.

Bradford insists it’s an improvement from Tinder for other reasons, though, including strict guidelines in place to keep people from being harassed or using the app just to arrange one-night stands.

“In 2 1/2 years, I can think of 10 people we’ve had to kick off the app for trying to do casual encounters, and that’s not bad for almost three years. We make that pretty clear when you join, that if something inappropriate happens, let the concierge know. This is not a place where you’re saying awkward things to people to get a laugh – do that on Tinder.”

As far as the curated selection goes, Bradford thinks The League’s method of selection is just a digital version of what people are already doing in real life.

“When you go to a dinner party that’s some of your friends, that’s very curated and handpicked. We’re just doing what everyone’s doing, but nobody wants to say it out loud,” she said.

“At the end of the day, our dating app is a lot about people’s values. As much as we say it’s elitist and it’s about education," Bradford said, "it’s also about people who are looking for equal partnership, which is not everybody.

If you haven't heard, PhillyVoice is delving into your love lives this summer and exploring the topic of dating. An addition to articles like this one and others, we want to hear your bad dating stories. We’ll compile our favorites – and don’t worry, we’ll protect the identities of all parties involved.

Sharing your tales of dates-gone-wrong will be cathartic for everyone involved. You can read more of our reporting on dating in the digital age here, or jump right in and tell us your experiences using the form below: