CHOP, Independence executives named among most influential in health care

Modern Healthcare ranked Madeline Bell and Gregory Deavens among the likes of Dr. Anthony Fauci and the Pfizer and Moderna leaders 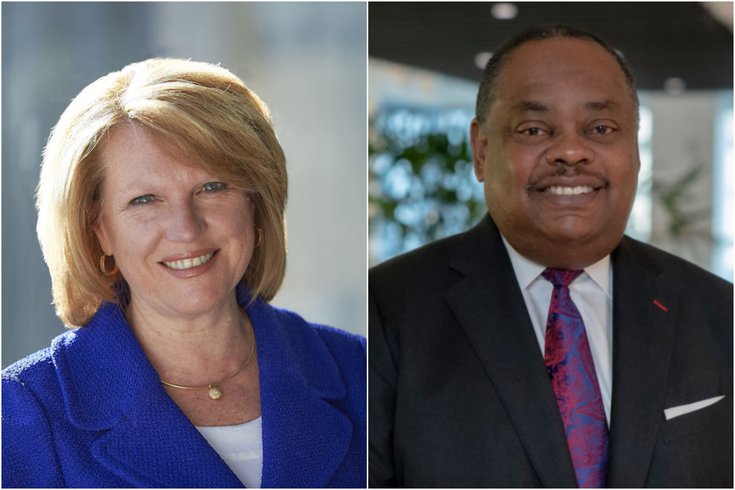 Madeline Bell, CEO of the Children's Hospital of Philadelphia, left, and Gregory Deavens, CEO of Independence Blue Cross, were named to Modern Healthcare's 2021 list of the '100 Most Influential People in Healthcare.'

Madeline Bell's efforts to expand the Children's Hospital of Philadelphia have landed her on Modern Healthcare's annual list of the "100 Most Influential People in Healthcare."

Gregory Deavens, the CEO of Independence Blue Cross, also made the list, which was topped by Pfizer CEO Albert Bourla and Moderna CEO Stephane Bancel, whose companies developed the two COVID-19 vaccines most widely used in the United States. Other prominent faces on the list include President Joe Biden, House Speaker Nancy Pelosi and Dr. Anthony Fauci, the nation's leading infectious disease expert.

Bell, CHOP's CEO, ranked No. 29 – one spot head of Apple CEO Tim Cook. It marked her fourth appearance on the list since 2017, but her highest ranking.

The publication lauded Bell for boosting CHOP's footprint, which soon will include a new hospital in King of Prussia. The health system also has opened the Roberts Center for Pediatric Research and the Buerger Center for Advanced Pediatric Care, a 12-story outpatient facility, within the last five years.

"A pediatric nurse by training, Bell has developed one of the largest pediatric ambulatory networks in the nation, implemented a single platform electronic health record system, and expanded CHOP's 4 million-square-foot campus. She serves on the boards of the Children's Hospital Association, Comcast, the Leonard Davis Institute of Health Economics, and Solutions for Patient Safety."

Gregory Deavens took the reigns at IBX earlier this year, becoming the company's first African-American CEO after previously serving as an executive vice president. In that role, Deavens oversaw Independence's purchase of its corporate headquarters building in Center City and directed the design and construction of the Independence Center for Innovation.

Modern Healthcare praised his breadth of experience in ranking him No. 68.

Two other executives from Pennsylvania also appeared on the list:

The rankings are based on input from Modern Healthcare readers and senior editors. The honorees are selected from a ballot of 300 nominees.