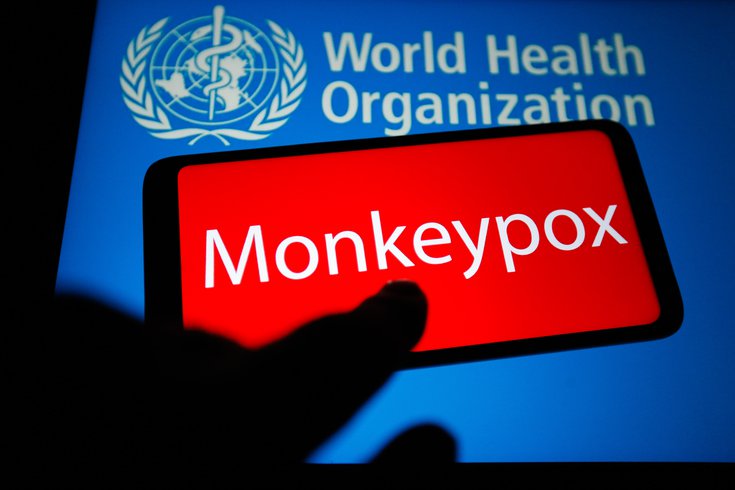 The first probable monkeypox case in Philadelphia was identified Thursday after preliminary testing. The city health department is investigating how the resident contracted the disease and whether anyone else was exposed.

A probable monkeypox case – the first in Pennsylvania – was identified in Philadelphia on Thursday.

The city's Department of Public Health is working to determine how the resident was exposed to the monkeypox virus and whether anyone else was exposed. The Pennsylvania Department of Health and U.S. Centers for Disease Control and Prevention are assisting in those efforts, the city health department said.

"Monkeypox is much less contagious than COVID-19, particularly when prompt care is sought for symptoms. Vaccine to prevent or lessen the severity of illness is available through the CDC for high-risk contacts of persons infected with monkeypox as is antiviral treatment for patients with monkeypox. I believe that residents and visitors should feel safe to do all the fun things Philadelphia has to offer with the proper precautions."

The Philadelphia patient was identified as a probable case following preliminary testing at the Pennsylvania Department of Health. Health officials declined to provide any details about the person, citing patient privacy.

More than 550 monkeypox cases have been confirmed in 30 countries since the first case in this outbreak was confirmed in the United Kingdom on May 6. There are 19 confirmed cases across 10 states in the U.S., according to the CDC. The worldwide outbreak only has caused one death.

Monkeypox is spread through close, personal contact or through contamination from bodily fluids. It also can be transmitted through respiratory secretions during prolonged, face-to-face contact, the CDC says.

Initial symptoms include fever, fatigue, enlarged lymph nodes and headache. A rash typically follows, beginning in the face and moving to the palms, arms, legs and other parts of the body.

During this outbreak, some cases have started with a rash on the genitals or the perianal region with no other initial symptoms, health officials say. Over the course of a week or two, the rashes turn into tiny blisters that look similar to chickenpox, and then to larger blisters. The blisters scab over after several weeks. When they fall off, the person is no longer contagious.

The first human case of monkeypox was found in the Democratic Republic of Congo in the 1970s. It was previously found in laboratory monkeys in 1958. It typically occurs in Central or West Africa, but international travel has enabled it to spread outside of the large continent.

Monkeypox is less severe than smallpox, a related virus that was eradicated worldwide decades ago, and it is less contagious than COVID-19, which is transmitted through tiny, airborne particles.

"You need to be very close for a long period of time," Brian DeHaven, biology professor and director of pre-health programs at La Salle University, told PhillyVoice last week. "The highest risk of exposure is for health care workers who treat an active infection and the families of the person with monkeypox."

The Pennsylvania Department of Health encourages anyone who develops an unexplained rash on the face, arms, legs, genitals or perianal region that may be accompanied by flu-like symptoms to contact their doctors as soon as possible. People who develop flu-like symptoms without a rash are advised to get tested for COVID-19, and should isolate until they receive test results.

The World Health Organization says that the best way to prevent the spread of monkeypox is for infected people to remain isolated until they are symptom-free. People who have symptoms and have traveled to places with confirmed monkeypox cases are encouraged to contact their doctors promptly to receive care as quickly as possible.