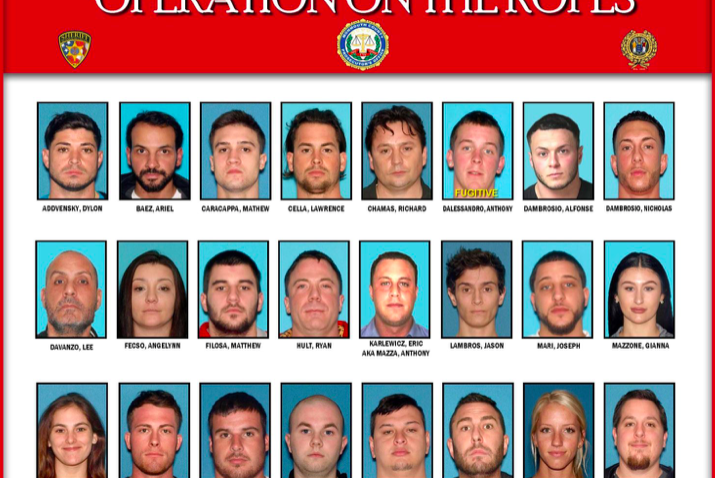 Monmouth County prosecutors charge 24 people for their roles in an illegal edible marijuana scheme. Authorities seized more than 100,000 individual doses of THC-infused candy produced in New Jersey following a year-long investigation. Investigators say the defendants bought Sour Patch Kids and Nerds Rope candy wholesale and then repackaged them after adding THC at a warehouse in Manalapan.

Charges have been filed against 24 people in New Jersey who allegedly produced and sold THC-infused candy, including Sour Patch Kids and Nerd Ropes, the Monmouth County Prosecutor's Office announced Wednesday.

A year-long investigation dubbed "Operation On The Ropes" resulted in the seizure of approximately 21,000 packages of candy infused with suspected THC, the psychoactive substance in marijuana.

Authorities also seized 1,100 pounds of suspected marijuana and over 6,000 flavored THC vape cartridges, which have been linked to a nationwide epidemic of vaping-related lung illnesses.

Officials said the total estimated street value of the seized candy and drugs is about $1.9 million.

“The network operators used regular candy to further their scheme, buying hundreds of boxes of product from wholesalers before transporting it to a processing facility where they would unwrap the individual pieces of candy, lay it out on trays and then spray the candy with a concentrated formula of THC distillate," said Monmouth County Prosecutor Christopher J. Gramiccioni. "Once the THC dried on the candy it was repackaged as an illegal marijuana edibles product for distribution across New Jersey."

More than a dozen search warrants were executed in Monmouth, Ocean and Bergen counties over the course of the investigation.

Those involved in the network allegedly used a warehouse in Manalapan Township and a hangar at Monmouth Executive Airport in Wall Township as production and storage facilities.

“The packaging on this THC laced ‘candy’ is almost indistinguishable from regular drug store candy," said Monmouth County Chief of Detectives John G. McCabe. "Your kids may be getting high right before your eyes, if you are not paying close attention. This illegal operation makes juveniles and anyone who consumes these products susceptible to random levels of drug toxicity."

Investigators said the candy producers allegedly did not take sanitary measures and did not have safety standards in place to ensure their products were not contaminated.

In addition to the drugs, authorities seized $10.15 million in assets, $1.48 million in cash and 21 high-end exotic vehicles owned by various defendants.

The alleged ringleader of the operation, identified as 27-year-old Dylon Addvensky, of Freehold, faces conspiracy and drug distribution charges, as well as leading a narcotics trafficking network. The rest of the defendants face charges ranging from intent to distribute and conspiracy to minor possession and disorderly conduct offenses.

One defendant from California remains at large and is charged with supplying shipments of THC products from the West Coast to New Jersey.

Numerous law enforcement agencies assisted in the investigation across New Jersey. An investigation into the financial activities of those involved in the organization remains ongoing.