As much as 12 inches could accumulate across Southeastern Pennsylvania on Wednesday. 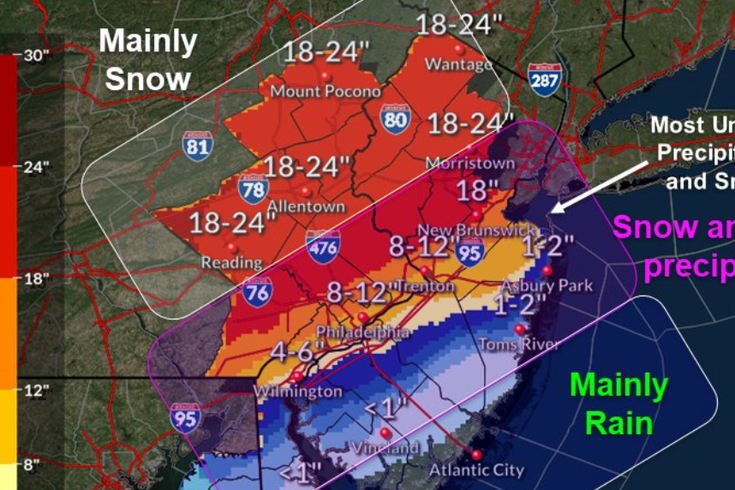 Wednesday's storm is forecasted to start as snow and turn into a wintry mix of snow, sleet, and rain across the Philly region.

A winter storm warning has been issued by the National Weather Service for Southeastern Pennsylvania, as the Philly region could see measurable snowfall and heavy mixed precipitation on Wednesday.

Total snow accumulations across the region could be in excess of 12 inches, and wind speeds could be as high as 35 MPH.

LATEST: Snow storm to hit Philly region today: What you need to know

Snowfall could be most significant near and north of the I-95 corridor, while a wintry mix is more likely south of the corridor — which could reduce total snow accumulation.

The snow is forecasted to move in southwest to northeast late Wednesday morning into the early afternoon.

Snow is expected to become heavy at times late Wednesday afternoon into the evening, as snowfall rates could reach 1-2 inches per hour. Sleet and freezing rain may be mixed in too.

The snow could result in hazardous travel conditions and power outages across the region.

The winter storm warning is in effect from Wednesday morning through Thursday morning.

The briefing package is updated and can be found here: https://t.co/JiD09BPJVv

Winter Storm Warnings are now in effect, as well as a High Wind Watch for the coastal strip of NJ and DE.#NJwx #PAwx #DEwx #MDwx pic.twitter.com/p4hcMt9Dhs

Below is the forecast for Philadelphia for Tuesday through Thursday.

Tuesday: Mostly sunny with a high of 39. Then mostly cloudy at night with a low of 26.

Wednesday: Snow between 10 a.m. and 12 p.m., followed by a wintry mix of snow and rain turning to sleet. High temperature of 36. Chance of precipitation is 90%. At night, 100% chance of more snow, rain, and sleet before 1 a.m., then more snow, freezing rain, and sleet overnight. Low of 28. Total snow accumulation between 4-8 inches. Little to no ice accumulation expected.

Thursday: Snow and rain expected before 3 p.m. 60% chance of precipitation. Partly sunny with a high of 34. Mostly cloudy with a low temperature of 20 degrees at night.