Snowstorm to hit Philly area today: What you need to know 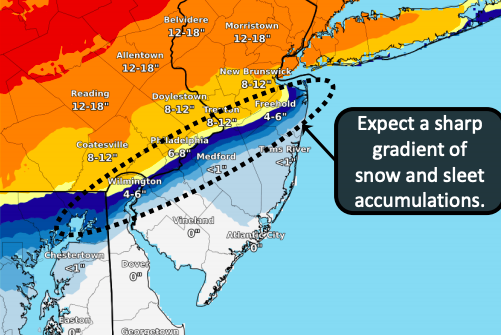 The National Weather Service said the snowfall in the region could vary dramatically — even just miles apart — in Wednesday's nor'easter.

As the mid-Atlantic prepares for the first nor'easter of the season, officials say the storm could look very different depending on what region you live in.

The storm is set to start Wednesday afternoon and carry into Thursday morning, and could bring Philadelphia anywhere from 3-12 inches of snow, depending on the section of the city.

Weather forecasts across the state could vary dramatically. Generally, the further inland you are, the more snow you should expect, officials say. Portions of central and northern New Jersey and southeast Pennsylvania could see snow and sleet accumulations of 6 to 12 inches .

A winter storm warning is in effect for Philly, the surrounding counties and parts of central New Jersey from noon Wednesday into Thursday morning, the National Weather Service announced in an update Wednesday morning.

Gov. Tom Wolf signed an emergency declaration for the storm yesterday, allocating $2 million in funds to deal with the effects of the storm across the state if necessary. The state was scheduled to receive shipments of the Pfizer vaccine Wednesday and Thursday, though Wolf said the storm should not impact their arrival.

"The commonwealth's emergency preparedness teams have spent a great deal of time and energy over the last several months supporting efforts to mitigate the COVID-19 pandemic and help the commonwealth weather this public health emergency and ensure vaccines are delivered as planned," Wolf said in a press conference. "This proclamation makes it easier for all of those involved in vaccine delivery and keeping people safe to do their jobs."

Philadelphia officials are preparing for the storm and warned that trash collection may be delayed due to weather. SEPTA said travelers should anticipate delays and keep a look out for ice and snow on station stairways and platforms.

BSL: Owl Bus service will be temporarily suspended and trains will run in the overnight hours on Wednesday, December 16 into Thursday, December 17. Please be alert for snow and ice on station stairways and wet platform areas.

The snowfall forecast remains slightly uncertain, according to NWS. While there is a high likelihood of snowfall for interior eastern Pa. and northwest N.J., it is less likely near the I-95 corridor. Freezing rain is the main concern there, as that could lead to scattered tree damage and power outages.

Travel is not advised during the storm. If you must leave your home, officials say to bring an extra flashlight, food and water in your vehicle.

The Philadelphia suburbs should see their first snowfall around 1 p.m. Wednesday.

Montgomery, Chester and Upper Bucks counties are slated to get up to 12 to 16 inches of snow, though they will see less intense winds than neighboring regions, according to Accuweather.

Upper Delaware and most of Bucks and Chester counties will see heavy snow, sleet and freezing rain with accumulations around 6 to 10 inches. Mercer and Montgomery counties in New Jersey are expecting a similar forecast, according to Accuweather.

In the tidal counties of New Jersey and Delaware, coastal flooding is possible, and a gale wind warning remains in effect for upper DE Bay, the NWS reported.

Gusty northeasterly winds of 30 - 40 mph, with gusts of 50 to 60 mph along the Atlantic coastline are expected as well.

Here's what the next few days in Philly will look like:

Wednesday morning: A chance of snow before 1pm, then rain and snow with a total daytime accumulation of 2 to 4 inches. Winds could reach 10 to 15 mph.

Wednesday night: rain, snow and sleet before 3 a.m., with heavy snow and rain after 4 a.m. at times. Blustery conditions with winds around 20 mph are expected, and chance of precipitation is 100% totaling 2 to 4 inches of snow and sleet.

Thursday morning: snow is likely before 8 a.m., though it will gradually become sunny and breezy, with winds at 10 to 20 mph. Snow accumulation totals less than one inch possible.

Thursday night: Mostly cloudy with a low around 22 and North winds at 5 mph.

Friday morning: Mostly sunny and a high of 32, with Northwest winds around 5 mph.