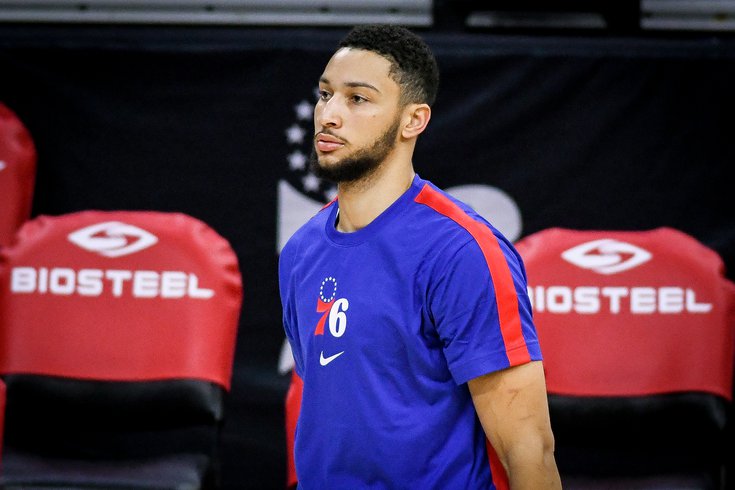 Two weeks ahead of the 2022 NBA trade deadline, one of the most aggressive suitors for Ben Simmons is reportedly out of the mix, with the Sacramento Kings sending signals that they're done pursuing Philadelphia's beleaguered star.

The Kings' roster represented one of the Sixers' best options for a Simmons deal ahead of the trade deadline. Losing them in the marketplace somewhat diminishes the chances of an in-season trade, although the Sixers still believe there are potential avenues to find a deal in the next two weeks, sources said.

With the Kings exiting talks and sources saying the Brooklyn Nets will not engage on a James Harden trade, it becomes an ever-increasing possibility that 76ers president of basketball operations Daryl Morey will be willing to advance the Simmons talks into the offseason.

Morey and the Sixers have remained committed to the belief that the offseason could deliver the availability of higher-profile players into the trade market for Simmons. Along with free agency, playoff disappointments often give teams and star players reason to pursue change, which could offer the Sixers a wider spectrum of options. [ESPN]

The Kings' side of the story is noteworthy here, mostly because of what a potential package from the Kings could have represented in both the short and long-term. A package centered around a young guard like Tyrese Haliburton, veteran forward Harrison Barnes, and draft capital would have allowed the Sixers to strengthen the team right now while still holding onto hope for a star deal down the road. For now, that dream appears to be dead.

Complicating things throughout the process is the involvement of Kings guard De'Aaron Fox, who either has or hasn't been available depending on who you ask and depending on the day. Team sources have indicated throughout the process that any deal with the Kings centered around Fox would have to be a multi-team trade returning a better-fitting player to the Sixers, adding a layer of complication to all discussions. That fact, among many other factors, has led to a slew of offers all across the board being reported on in recent weeks, ranging from deals involving just Simmons to deals that were alleged to have sent Simmons and Tobias Harris (and possibly more) elsewhere. Based on Sacramento's current stated position, it would seem talks never got as far as it seemed, which is something we noted here covering this story in recent weeks.

Before we throw the baby out with the bathwater, it's critical to note that this doesn't actually mean anything until/unless the deadline passes without a deal coming to fruition. Every piece of intel that becomes public consumption this time of year has to be taken with a grain of salt, and while it's certainly believable that Daryl Morey could have turned off a suitor with a high asking price, it's equally believable that a former Morey colleague would try to put public pressure on Morey ahead of a critical deadline. This is how the game is played in late January and early February, and you can expect more shenanigans in the weeks to come, authentic or not.

The problem there is that the franchise's conviction to hold onto Simmons through the deadline appears to be strong. From the owner's suite down to Joel Embiid on the hardwood, the Sixers have not blinked publicly or privately as of yet, insisting they are happy to wait for their opportunity to make the best possible deal involving Simmons. The Kings were and are not the only team interested in pursuing Simmons, and even if they were, the Sixers have been adamant about their position all year. Should they fail to find a suitable trade, the Sixers have said repeatedly that they'd prefer to hold onto Simmons and convince him to rejoin the lineup, filling the holes in production he left behind.

Of course, saying those things and actually living in that world is very different, and the Sixers are inching ever closer to a scenario where they stare down an MVP-caliber Embiid and tell him they're okay with standing pat. Embiid has said all the right things, but doing nothing at the deadline with Embiid playing at this level would be a tough sell, if not to the big man then certainly to the public.

(If any executive in the NBA is going to ignore that noise, it's Morey, whose approach has often skewed more toward raw talent and star power than anything else. He is, as has been reported many times over at this point, willing to live with a bit of discomfort.)

To this point, the Sixers have gone above and beyond to ignore the public pressure, perhaps because of the rumblings out there regarding their chances to acquire James Harden this summer. For the next two weeks, that scrutiny from the outside matters very little, and all that matters is the final result when all the phone calls, negotiating, and deal-making come to an end. But if the dust settles and Simmons is still on the roster on February 11th, it'll be a lot harder to hide from the hecklers. With one of the franchise's best-ever players in his best-ever form right now, there are a lot of people asking the Sixers a simple question — when are you going to get this guy more help?