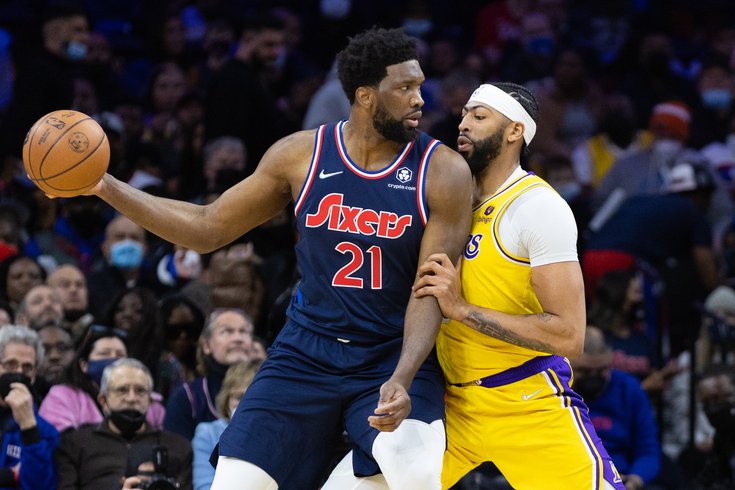 The Sixers beat up on the Lakers in a nationally-televised game on Thursday night, picking up a 105-87 win even with Joel Embiid struggling out of the blocks.

• Tobias Harris seems to have found his rhythm over the last couple of weeks, playing with pace and purpose for what feels like the first time since last season. Everything is happening quicker for him — catch-and-shoot attempts are close to automatic, his moves in the painted area don't waste time, and he's not dawdling as much in the post, firing the ball out rather than dribbling 10 times and bogging down the offense.

As has been the case in the past, it has brought out Harris' best. With Talen Horton-Tucker on his hip during a first-quarter possession, Harris left the younger player in his dust with a beautiful spin move, one of his best of the year for a quick two at the basket:

We're seeing more and more plays like this from Harris lately, and it doesn't feel a whole lot more complicated than Harris finally playing with a level of urgency. After their win over the Pelicans on Tuesday night, Doc Rivers even made note of the problem facing Harris — they're okay with having one ball stopper in the lineup, but that guy is Embiid, and they need Harris to understand that fact.

The message seems to have resonated loud and clear. Even though he's often operating from the same spots he has all season, Harris has been more effective there by striking while the iron is hot. He is finally carrying himself like a guy who has a deep offensive skill set, and that might give the Sixers the lift they need to keep winning games as Embiid comes back down to Earth.

• This game is exactly why it was fine to give Matisse Thybulle a pass for looking like a total mess in his return to the lineup the other night. After getting some game reps under his belt against the Pelicans, Thybulle was back to his usual tricks on Thursday night, playing disruptive defense away from the ball and finding a way to score by capitalizing on the attention paid to Embiid.

Thybulle's off-ball movement and cutting have been much improved recently, and that trend continued against the Lakers, even when he started from spots on the floor that should be problematic for Philly. It seems counterintuitive to use him as the strong side guy for Embiid, and you don't want the big man auto doubled very often, but Thybulle exploding through the space to get to the rim earned Philly some easy ones around the hoop throughout the evening.

right through his legs & to the house. pic.twitter.com/EMKktKZW4k

But as all of you reading this know, Thybulle's value lies in his ability to tilt the game on defense. He had a golden opportunity to turn the opponent over with turnover machine Russell Westbrook in the building, and Thybulle did not disappoint, flashing into space at a moment's notice to tip and pick off errant passes all night. He looked like a ball-hawking free safety at times in this one, with the Lakers letting their guard down on transition possessions and getting immediately punished for it.

Thybulle didn't seem to waste a single opportunity to make them look bad, even when it took superhuman efforts to get there. The block he came up with against Malik Monk midway through the fourth quarter was as good as defensive plays get, with Thybulle recovering from an almost unthinkable position to block the jumper and send the Sixers running the other way.

When Thybulle and Embiid are in form, the Sixers have a chance to field a pretty good defense, simple as that.

• Tyrese Maxey's effectiveness on two-point shots has been down lately, which is a bit of a concern as we look forward to potential playoff scenarios, but there are some nice signs that he's going to be an impactful role player when it counts, moments where he serves as connective tissue for the offense even when he's a mere bit player on a possession.

While his willingness to take open threes is still critical to this team, that's only part of the deal. Quick decision making in all its forms matters, and you're seeing some more of that form Maxey lately — on several kick-outs from Embiid in this game, Maxey barely had the ball hit his hands before the pass was moving to a wide-open teammate elsewhere, getting Sixers players quality shot opportunities as a result of Embiid getting doubled.

That may not be what people think of when they say Maxey needs to learn the point guard role, but with the offense geared around Embiid, he's going to have to find ways to playmake and create while operating from a standstill. That he seems to be doing so is a good sign.

• It's easy to look good on defense when the other team shoots like absolute garbage from outside, but I do think the Sixers deserve a bit of credit for their approach to this game and their understanding of assignments. They have been punished at times for taking non-shooters seriously and helping to/off of the wrong guys, but they had a good understanding of who to leave alone in this one.

*Jason Kelce voice* it was the whole damn team.

• Kudos to Danny Green and Georges Niang, who lit it up from deep against the Lakers. It was especially good to see Green make a few shots in limited action, with Green back in the lineup following yet another layoff this year. An extra wing who can defend and shoot in the rotation would make a big difference, and Green simply has to stay healthy long enough for that to be a reality.

• Joel Embiid has not had any problem taking it to Anthony Davis over the years, though Davis has often played basketball DH in their matchups, letting someone else deal with the big guy on the block. This time around, Davis took the challenge of defending Embiid for most of their minutes on the floor together, and as a basketball fan that was a real treat, because these two are among the best in the business.

We don't have to mince words here — Davis got the better of Embiid for most of this one. Back in the lineup this week after a long layoff, Davis had a little extra juice for this game, scoring 23 points in the first half to help keep the Lakers afloat. Embiid has been in a good enough scoring groove that it felt inevitable he would try to go shot-for-shot with Davis, making another statement in a national TV game. But his shot never really got there, and even the free-throw line was an adventure for Embiid, who couldn't find the groove at any point against the Lakers. Davis even managed to use his length to block Embiid multiple times, a rare sight.

The good news: Embiid doubled down on the approach that has gotten him and his team to this point. Embiid (mostly) didn't try to play hero ball to keep pace with the guy standing across from him, and with L.A. sending frequent help toward Embiid in the post, he embraced the playmaking role, picking up four assists in the first half with the Lakers abandoning their assignments to converge on him in the paint.

That continued in the second half, and the Sixers managed to get a number of guys going who aren't typically used or thought of as cutters, including Tyrese Maxey, who picked up some easy points early in the second half in part because of L.A.'s overzealous focus on Embiid. The shooters had a field thanks to overhelp from the Lakers, with guys like Georges Niang, Danny Green, and more teeing off with nobody getting a reasonable contest on their shots.

This year's Lakers are no Goliath, especially without LeBron James, but seeing the Sixers beat up an opponent like this even with Embiid struggling a lot of the night is a great sign for this group. He has picked them up over and over again this season, and they came through for him on Thursday. And hell, if a relatively "bad" game for him comes with this sort of line and a W, I can guarantee you he and his teammates will take it.

(The only bit of concern I have coming out of this one — perhaps Embiid needs to sit down for a game if this is about not having the legs. His availability has been huge for them, but it wouldn't hurt to give him a night off. The Kings are coming to town Saturday, after all.)

• Spelling errors — they're not confined to this year's NBC Sports Philadelphia broadcast:

• This opinion is becoming a lot closer to consensus than it was coming into the season, but Talen Horton-Tucker is just not good. I don't think I have ever seen him play a single good basketball game, and the Lakers are on enough that that's in a reasonably large sample size. Choosing him over Alex Caruso was insane.

(And by the way, Laker fans are the ones who tend to get blamed for this phenomenon because they're a huge and loud group, but the fans didn't pay Horton-Tucker real money at the cost of losing an impactful role player. Maybe give the money to guys who actually make a positive impact on the team.)