NBA trade rumors: If Sixers don't deal Simmons, who else could they move at deadline?

Would Daryl Morey be willing to trade a starter like Danny Green — or even a key role player like Furkan Korkmaz — without getting much back? 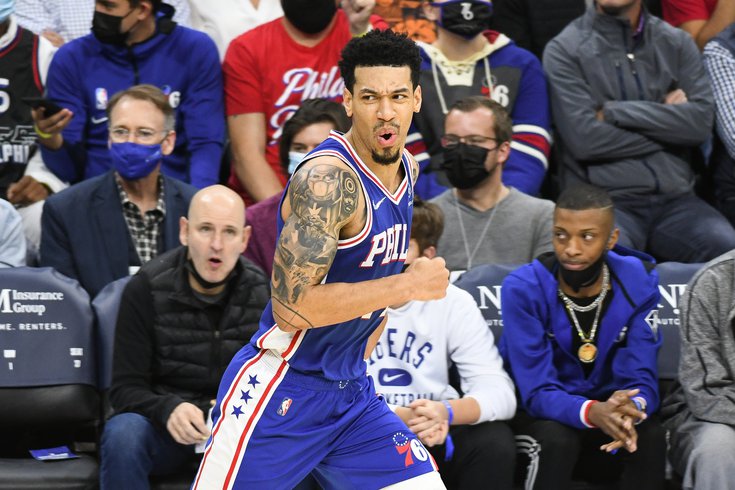 Danny Green hasn't quite been having the on-the-court impact this season the Sixers had likely hoped for. The veteran forward has appeared in just 32 of his team's 50 games and is averaging just 6.9 points per game. And while his shooting numbers are fairly close to his career averages, the 34 year old isn't offering the same defensive prowess that made him a formidable three-and-D player on three different championship teams.

When they traded for Green last offseason, the Sixers thought they'd be the team to get him his fourth ring, but a Game 7 loss to the Hawks in the second round of last year's playoffs ended that dream. And without Ben Simmons or anyone to replace him with — at least for now — it appeared Year 2 with the Sixers was headed toward a similar conclusion. But a recent dominant run from center Joel Embiid has Philly just a half game back of the top spot in the Eastern Conference with just 10 days left before the trade deadline.

Could that cause Daryl Morey and Co. to be more aggressive? Or, with potential Simmons suitors drying up and the possibility of landing a guy like James Harden in the offseason, will Morey take a different approach to the deadline, one that might not totally destroy the Sixers' championship hopes, but one that might seem counterintuitive to the win-now mentality you'd expect with a guy like Embiid playing at this level. Like, maybe they trade one of their starters for someone a little cheaper, perhaps someone younger with an eye toward building a true contender for the 2022-23 season.

Like, say Danny Green? Of course, shedding his $10 million salary would also help the Sixers get below the luxury tax threshold.

At least that was the idea floated by Yossi Gozlan of HoopsHype.com.

If the Sixers don’t trade Simmons, one other move they could make is one that gets them below the luxury tax. They are $5.1 million above the tax when accounting for a set off the Sixers will receive on George Hill’s dead cap hit. Danny Green could be the cap casualty with his role diminished in favor of Matisse Thybulle. Offloading Green or trading him for a player who earns significantly less could get them below the luxury tax. His playoff experience and non-guaranteed salary for next season should make him easy to move.  [hoopshype.com]

Why would the Sixers trade Green (aside from the financial implications)? Well, for starters, Tyrese Maxey has taken a much more active role in the offense, and is adding more offensively than Ben Simmons was at point guard, not to mention his three point shot has taken a step forward this year. On the defensive side, the Sixers have a guy like Matisse Thybulle who can more than make up for what they'll be losing there.

The problem, however, comes when you'd need two lengthy wings on defense — like will be the case against many contending teams in the playoffs — and at that point, without Simmons or Green, Doc Rivers could have a tough time with the matchups.

Perhaps that's why, as our Kyle Neubeck suggested in Slack when I ran this by him, that the Sixers would be better served moving a guy like Furkan Korkmaz, who has been struggling mightily this year. While he has helped at times when needing to fill in at point guard, his shot looks completely lost. And defensively, while improved in that area, he's never going to give you what Green does. Unfortunately, he also doesn't make as much as Green, and his $4.6 million cap hit probably wouldn't get them below the luxury tax without another move — not to mention that he isn't going to bring back the kind of return someone like Green would, a guy with a ton of playoff experience who can help a contender right now.

Still, what you're beginning to see now that the momentum on a Simmons trade has slowed, is that the Sixers could have other options to improve their team, and pretty much no one is safe, save for Embiid and, if this writer had his way, Tyrese Maxey (and also please don't take Seth Curry).

So, what moves will Morey and the Sixers make between now and next Thursday's trade deadline? We've got you covered with live updates and analysis of every move in our live tracker below — and if there are any major developments with the Sixers, we'll top this post off with the new info. Let's do this...