The $365,000 vehicles made by Pittsburgh's Blue Bird cost nearly three times as much as their diesel predecessors, but will each save the district $5,000 per year in fuel and maintenance costs 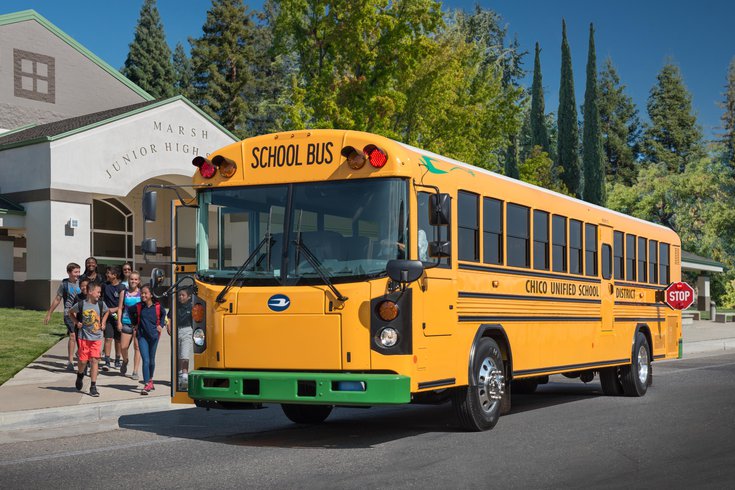 The School District of Philadelphia has invested in five new electric buses, which it unveiled at a press conference at its North Broad Street garage on Friday, and has six more coming soon.

Yellow school buses are going green in Philly. The district unveiled five new electric vehicles at a press conference at its garage on North Broad Street on Friday.

While the electric buses from Pittsburgh-based manufacturer Blue Bird cost $365,000, nearly three times as much as traditional diesel ones, each vehicle could save the district as much as $5,000 per year, said Reggie McNeil, the district's chief operating officer.

The new vehicles will cost 60% less to maintain and 80% less to fuel than a traditional diesel bus.

Replacing a diesel bus with an electric one eliminates 23 tons of greenhouse gasses that would otherwise be emitted every year.

The electric school buses are "the first of their kind in Pennsylvania," according to a June press release from the district.

Soon, McNeil said the district will buy six more electric buses with an Alternative Fuels Incentive Grant it will receive from the Pennsylvania Department of Environmental Protection.

McNeil noted that the 11 buses would still constitute less than half a percent of the 330 vehicle fleet, but the district announced in June that it hopes to make as much as 20% of its fleet zero emissions by 2026 and plans to buy five new electric buses each year.

The new vehicles won't make their debut for a few months, as the district's drivers and mechanics need to be trained on how to use them.

Some of the buses will be piloted in late spring and the plan is to have all five on the road in time for the district's extended school year summer program, said Teresa Flemming, the executive director of transportation services.

The district will be attaching devices which monitor air pollution to both electric and diesel buses. The data will be provided to the Philadelphia Department of Health and passed on to teachers in the district so they can work it into lesson plans.

Most students in Philly walk or take public transit to school, but there are over 10,000 kids in the city who depend on the yellow buses. First through sixth graders who live over 1.5 miles from school are eligible to be picked up every morning.

Transportation has been a challenge for the school district this year amid a nationwide bus driver shortage stemming from the pandemic. As a result, service has been patchy at times this year and the parents of some kids who are eligible to be picked up have been left to figure out transportation on their own.

In September, the district offered some parents $300 a month to drive their kids to school.