Proposed penalties would be stiffest in the United States 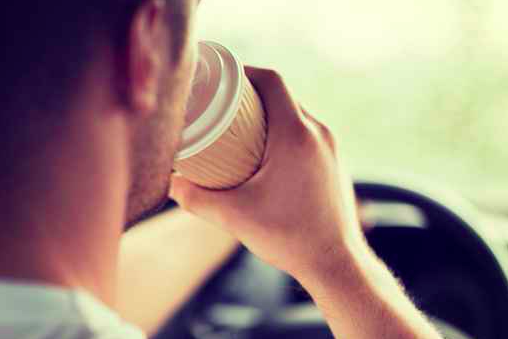 New Jersey commuters who depend on a cup of joe to stay alert for the morning drive could soon find themselves in a world of trouble if the state legislature moves forward with a stringent proposal to curb distracted driving.

Sincere apologies if you just spit out your coffee. Many on Twitter flipped their lids.

As I read more stories about road rage I recall that in my day road rage meant driving without coffee :-)

"Intended to educate not punish." Sure. But it comes with monetary fines so there's that! https://t.co/sfHKEFM3TS

The state of New Jersey is considering fining people for drinking coffee while driving. Despicable! Have they no pride?

The tightening of noose around motorists necks never lets up. Cops-forced to enforce this crap-image would suffer 2! https://t.co/IfP195HATM

The bill under consideration in Trenton is an outgrowth of the state's Task Force on Distracted Driving, which arose partly in response to an estimate that nearly half of New Jersey's three million or so vehicle accidents between 2004-2013 were attributable to driver inattention.

"The task force’s charge is to study and develop recommendations concerning the issue of driver distractions and highway safety including, but not limited to, electronic communication devices," read the text of an initial act establishing the task force in 2014.

Few may have anticipated then that Assemblymen John Wisniewski (D-Middlesex) and Nicholas Chiaravalloti (D-Hudson) would advance a bill that calls for a ban on drinking coffee, eating of any kind and personal grooming.

Wisniewski and Chiaravalloti have said the proposal is modeled on the strict law enforcement approach in Maine and Utah, which have adopted the most severe penalties in the United States. In Maine, distracted driving is defined as follows:

"Engaging in an activity that impairs the operator's ability to drive, including, but not limited to, using an electronic device, applying cosmetics or performing personal grooming with any device."

But coffee? A granola bar? As excessive as this sounds, federal studies in recent years suggest distracted driving is a culprit in as many as 80 percent of crashes and 65 percent of close calls, according to the National Highway Traffic Safety Administration. Drinking coffee and eating could be statistically worse than texting, some argue, because the vast majority of drivers openly admit they do it.

In terms of penalties, New Jersey's proposal could potentially go further than both Maine and Utah. Violators in Utah pay a $114 fine, a $50 court surcharge and another surcharge amounting to 35 percent of the fine. In Maine, the penalty is $119, two points on your license and any other associated fines for traffic violations.

Wisniewski and Chiaravalloti's bill calls for a $200-$400 fine on the first offense, $400-$600 for a second offense and $600-800 for a third violation. At that point, a driver would receive points on their license and face the possibility of a 90-day suspension.

Experts have already expressed skepticism about the law, according to New Jersey Advance Media. Steve Carellas, policy and government affairs director for the New Jersey chapter of the National Motorists Association, said the bill doesn't reflect the reality that some amount of multitasking is simply part and parcel of driving. A representative from AAA also questioned whether police officers could actually enforce such a law.

"The legislation introduced by Assemblyman Wisniewski, while admirable in theory, may not help police," said Tracy Noble, AAA Mid-Atlantic spokeswoman. She added that a message of eliminating distractions is worthwhile, however, and could have the same impact as seat-belt legislation.

New Jersey currently only prohibits the use of hand-held cellphones while driving, though police retain the authority to write summonses for reckless and careless driving that may be linked to other activities.

This isn't the first jarring road safety proposal to emerge in the Garden State in recent months. Assemblywoman Pamela Lampitt (D-Camden) introduced a bill in March that would impose penalties on pedestrians for walking while texting — or otherwise using a non-hands-free device — on public sidewalks and roadways.