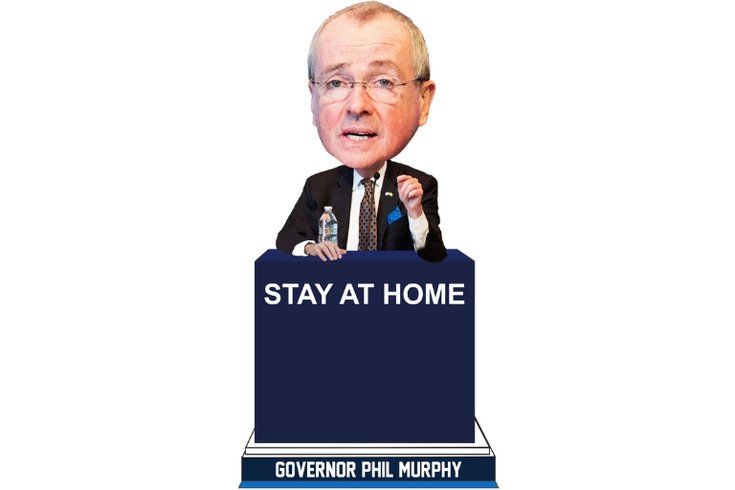 The National Bobblehead Hall of Fame and Museum is selling a bobblehead of New Jersey Gov. Phil Murphy. A portion of the sales will help buy personal protective equipment for health care workers.

New Jersey Gov. Phil Murphy is receiving widespread approval from residents for the job he has done managing the state's COVID-19 outbreak, and now he's being immortalized as a bobblehead.

The figurine depicts the state's 56th governor sitting behind the long, blue table from where he has delivered his daily briefings during the coronavirus pandemic. Just like at the real briefings, the words "Stay at Home" are printed across the front.

The Murphy bobble head is being produced by the National Bobblehead Hall of Fame and Museum. The company announced plans to make it on Friday.

For every unit sold – it costs $25 plus an $8 shipping – the museum will donate $5 to support the 100 Million Mask Challenge, which connects health care workers with personal protective equipment manufacturers. The company has already raised more than $200,000 from sales, so far.

"We received a lot of requests to make a bobblehead of Governor Murphy and other governors who have been instrumental in the continued fight against COVID-19, so we're excited to be releasing his bobblehead today," Phil Sklar, National Bobblehead Hall of Fame and Museum co-founder and CEO, said in a statement.

Resident of New Jersey are overwhelmingly approving of the job the governor has done, according several recent polls. The latest – the Rutgers-Eagleton Poll released Wednesday – has his approval rating at 77%, which is even higher than Gov. Chris Christie had in 2013 before he cruised to his reelection.

The Murphy bobblehead is available for pre-sale through the National Bobblehead Hall of Fame and Museum, which is the same company that created the Gritty bobbleheads. The bobbleheads will ship in August.