Gov. Murphy on U.S. gun violence: 'We're still the greatest nation on Earth, but we're in a bad place' 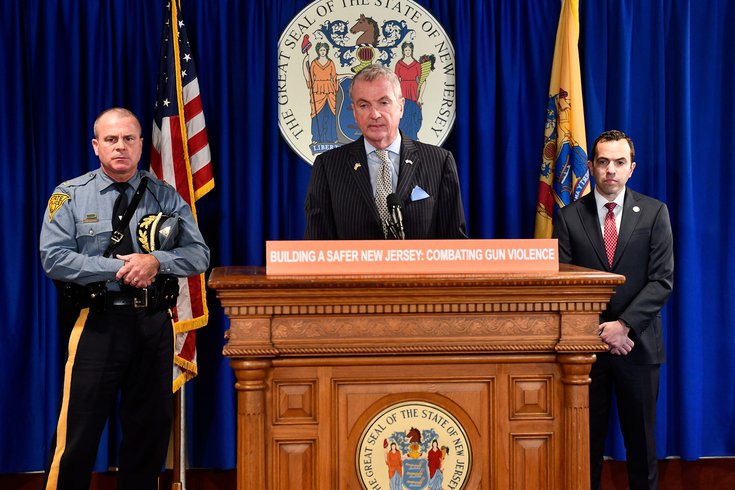 Murphy initially proposed the bill package in April 2021 and urged lawmakers to pass it following an increase in mass shootings. The package — aptly named "3.0" by New Jersey officials — is the third gun safety measure implemented by Murphy's administration since he was first elected in 2018.

Each of the bills aim to regulate aspects of gun sales and enhance safety, while enabling law-abiding gun owners to keep their firearms. Murphy said that this is not the last gun measure that his administration will work on through the remainder of his second term.

“In the wake of horrific mass shootings in Highland Park, Illinois, Uvalde, Texas, and Buffalo, New York, it is necessary that we take action in order to protect our communities,” said Murphy. “As I have said before, this is a huge step forward for commonsense gun safety and for safer communities. But it cannot be our only or last step. I look forward to continuing to work with the Legislature and take action to make this state safer for all.”

The bills include a public nuisance law, which allows the Attorney General to bring cause of action for nuisance violations arising from the sale or marketing of firearms. Another mandates a safety course prior to purchasing a firearm, similar to a driver's test.

Since then, there have been more than 870 mass shootings in America.

One measure includes a law that would require gun purchasers to obtain identification and register handguns acquired out of state. Murphy told Shannon Watts, founder of Moms Demand Action, that up to 80% of gun crime in New Jersey is done with guns purchased out of state.

Another bill requires micro-stamping technology as it becomes commercially available. Micro-stamping places a one-of-a-kind identifier on bullets and ammunition, enabling law enforcement to easily track the gun owner as part of a criminal investigation.

Other measures include increasing penalties for the manufacturing or sale of ghost guns, establishing electronic record keeping of all ammunition sold in the state, and banning the sale of some .50 caliber weapons.

Murphy joined Watts for an Instagram Live discussion on the passage of the sweeping gun safety legislation on Tuesday afternoon.

In addition to support from lawmakers in Trenton, the gun safety package was made possible by organizers with Moms Demand Action and March for Our Lives New Jersey, both of which were born out of the national movement to end mass shootings.

"We need Congress to continue to act. They acted in a positive direction a couple weeks ago — modestly — but in the right direction," Murphy said during the Instagram Live, referencing the passage of a federal gun control bill. "We need more of that and we need our neighbors to be strong as well. But in New Jersey — within our four walls, I think of this as improving your batting average in baseball. We're among the safest states in the country as it relates to gun crimes, I want to constantly improve that batting average in New Jersey."

Murphy said that the gun safety package was not spurred on by recent mass shootings in Highland Park, Uvalde, Buffalo, or in Philadelphia, but to address gun control issues that are present nationwide. When Watts asked the governor where he believes the country is right now in terms of gun violence and safety, he responded with concern.

"I love my country. We're still the greatest nation on Earth, but we're in a bad place," Murphy said. "Not even mentioning the two police (officers) in Philadelphia who were shot ... (and) Highland Park, the death and the destruction. We're in a tough place, and we've got a Supreme Court that's been commandeered by a radical right-wing block."

He noted that with many big issues — including gun control and abortion rights — it appears that we're becoming "two Americas," among both racial and geographic lines. It matters where you live and where you work, Murphy said.

The bills come in the wake of a Supreme Court decision in June that struck down a New York concealed carry law, where the conservative-led Court found that states are unable to decide for themselves under what circumstances to allow concealed carry permits.

Just one day prior to signing the gun safety package, a gunman opened fire at a Fourth of July parade in Highland Park, Illinois. Residents, including families with young children looking to celebrate the holiday, scrambled to find loved ones in the chaos, while six people were killed and 36 others were injured just 15 minutes after the festivities began.

Murphy responded on Twitter when the news broke, saying that "Not even a parade on the Fourth of July to celebrate our nation's independence, is immune from our nation's gun violence epidemic."