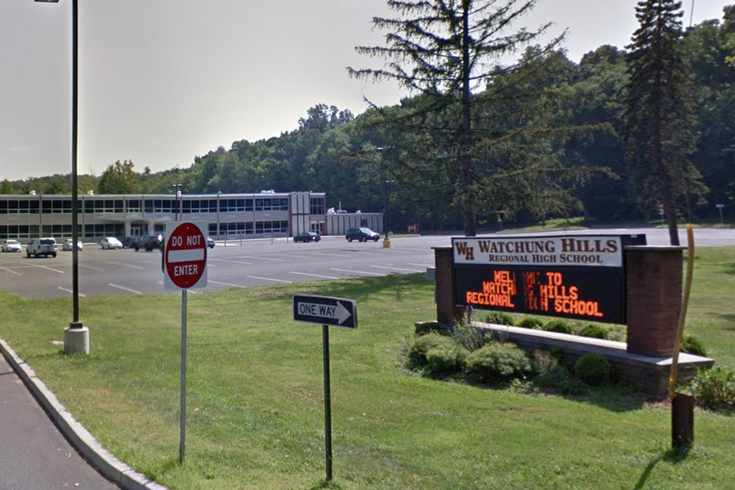 A view of Watchung Hills Regional High School. Two students from the school reportedly dressed as a slave and a slave owner at a Halloween party.

A New Jersey high school is working with law enforcement to investigate reports of students dressing as an African-American slave and a slave owner at a weekend Halloween party.

Watchung Hills Regional High School District condemned the students' conduct this week in a letter from Superintendent Elizabeth Jewett. The party was outside the school and not affiliated with the school district, Jewett emphasized, but law enforcement has been involved with an investigation.

Here's a screen grab of the photo in question, which appears here to have been sent via Snapchat:

These 2 seniors that go to Watchung hills high in New Jersey thought that dressing up in black face and being a slave and a slave master were appropriate TWITTER Do ya thing!!! pic.twitter.com/qiWenzNMlG

Some on social media debated whether the outfits were coordinated, according to the Echoes-Sentinel, and whether the student with a whip was actually dressed a slave owner.

Jewett said the School District plans to organize meetings with students in small groups to discuss the incident, and to "focus on the future." Participation in the discussions will be optional, according to Jewett.

Jewett went on to call for the incident to become a "teachable moment" for the community:

"Hate has no place on our campus. The Watchung Hills Regional High School District seeks to develop ALL of our students into young adults who are able to demonstrate empathy, cultural sensitivity, and ethical decision-making. Toward that end, rather than responding to a hateful act with more hate, I am asking that we, as a community, work together to ensure that the racial insensitivity and inappropriateness of these students’ actions serves as a teachable moment. Let us work toward restorative, rather than retributive, justice, repairing the harm done through cooperative processes that include all stakeholders."

Jewett ended the letter with a quote from the Rev. Martin Luther King, Jr.: "Darkness cannot drive out darkness; only light can do that. Hate cannot drive out hate; only love can do that." The quote is from King's 1963 book, "Strength to Love," a collection of his sermons, according to The Atlantic.