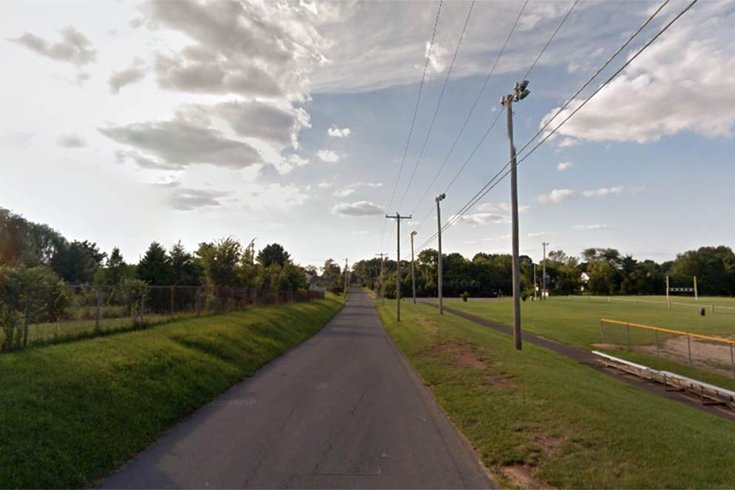 The view along Kirk Road, looking toward Jacksonville Road, in Warminster, Bucks County. At left, beyond the fence, is the area where fire training exercises using PFOS-containing firefighting foam took place at the former Naval Air Warfare Center. At right is Werner Field, home of the Warminster Pioneers youth football teams.

A new material developed by researchers at Northwestern University will interest residents of Bucks and Montgomery counties who for years have tried to get answers on the health impact of toxic chemicals in their drinking water.

Residents who live near the former Naval Air Warfare Center in Warminster and the former Willow Grove Naval Air Station in Horsham want to know the effect of toxic contamination in their ground wells. Firefighting chemicals used at the military bases for decades, specifically perfluorooctanoic acid (PFOA) and perfluorooctanesulfonic acid (PFOS), have infiltrated groundwater. The problem has been seen near military installations nationwide, and a number of communities closed their drinking water supplies in 2016. A number of local wells have been closed in recent years in neighborhoods around the former Navy facilities, which are less than 4 miles apart.

In May, a draft report released by the U.S. Agency for Toxic Substances and Disease Registry, part of the U.S. Centers for Disease Control and Prevention, concluded that some residents who live near the former NAWC and WGNAS facilities "received water containing concentrations at (a) level up to 15 times the EPA LTHA," or Lifetime Health Advisory.

The EPA's 2016 advisory limit for the combined concentration of PFOA and PFOS in drinking water is 70 parts per trillion, which is equal to one teaspoon of PFOA in 14 Olympic-sized swimming pools. Negative health effects have been noted at lower concentrations than the EPA advisory limit in extensive studies of PFOA exposure. At least four states, including New Jersey, have implemented limits of at least half the EPA limit.

On Thursday, however, researchers reported that an inexpensive and renewable material rapidly removes PFOA from water, effectively reducing the toxic pollutant to levels below 10 parts per trillion, well below the advisory limits set by the EPA and state health departments across the nation.

"Our material fully extracts the pollutant out of water," William Dichtel, an expert in organic and polymer chemistry who led the Northwestern study, said in a statement announcing the finding. "The polymer contains sites that bind PFOA strongly, which strips this pollutant out of water even when present at extremely low concentrations. The binding sites are joined together by linkers that further enhance the affinity for PFOA."

Dichtel said he believes the material can support water purification efforts to rid drinking water of PFOA and perhaps PFOS and other per- and polyfluorinated alkyl substances.

The PFOA material and Dichtel's polymer technology are being developed for commercial use by CycloPure Inc., a company co-founded by Dichtel, the release said. The study was published recently by the Journal of the American Chemical Society.

The polymer can be regenerated and reused multiple times. It only takes a modest amount of the material to capture and remove PFOA to less than 10 parts per trillion.

"Our findings demonstrate the selectivity of this type of polymer can be tailored to target pollutants of interest, in this case, PFOA," Dichtel said. "The material has more than 10 times higher affinity for PFOA than activated carbon, a conventional treatment method with several known deficiencies."

The main component of the polymer, betacyclodextrin, is a naturally occurring bio-renewable sugar molecule derived from cornstarch.