NFL too important to entrust to Roger Goodell 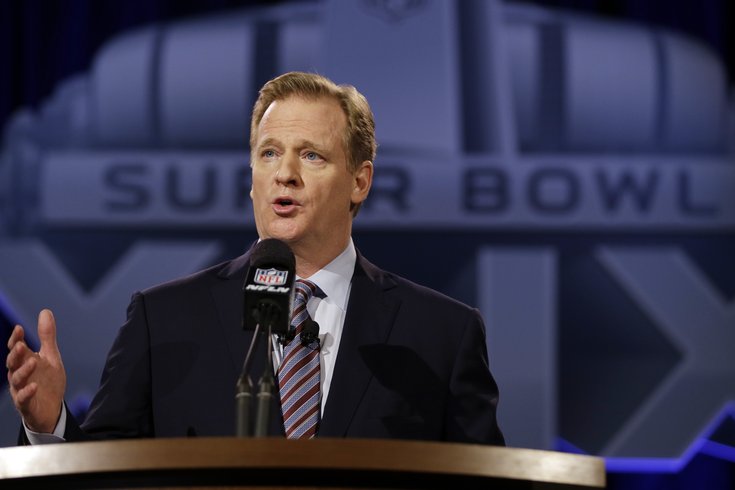 Roger Goodell speaks during his annual State of the League speech last Friday in Arizona.

Some leftover notes, half thoughts and not-so-scientific notations at the end of another wildly entertaining football season:

Despite some sordid on- and off-the-field antics, the NFL remains a national treasure in terms of pulling the public together. There is no other platform in America that pulls in so many people of all economic and social strata.

It doesn’t matter if you are the CEO of a huge company, the janitor who cleans his office, the daughter of that CEO, or the transgendered relative of one of the employees, there is a good chance you not only watch the NFL, but use it as a tool to communicate on a daily basis.

This year’s Super Bowl delivered a whopping number of viewers, and from week to week leading up to that game there seemed to be another matter to discuss. It was much more comfortable when the discussion concerned a bad call by a referee, but there were times when national debate took place on matters such as domestic abuse or the reaction to the possible entry to the league of the first openly gay player.

There was talk of cheating and of the responsibility of athletes to talk to the media. And, a day after the big event in Arizona, there was discussion about Johnny Manziel’s abuse problems that have led him to a rehab clinic.

Although many use sports as a vehicle to get away from the more serious social issues of the day, the truth remains that since the days of Jackie Robinson (and even before), sports has presented us with an opportunity to study some of those issues.

And that is why, despite its economic prowess, the NFL cannot allow Roger Goodell to remain in command. The dollars might pile high, but the value system is in a downward spiral.

So, what is going to be a better show in Florida this spring – Bike Week in Daytona, or Alex Rodriguez at the Yankees camp?

And if you really want to make it a three-ring circus, make the third stop in Clearwater, when Jonathan Papelbon shows up to answer questions about why the club could not get rid of him.

Whether you are a hockey fan or not, you should go out of your way to see the documentary “Red Army,” which is basically the view from the other side in regards to the 1980 Miracle on Ice.

It is a fascinating study of the old Soviet Union sports machine, Slava Fetisov, the politics involved and the fallout from the loss to Team USA at Lake Placid. It turns out the loss was a greater “win” for the Russians than it was for the Americans.

Here is the trailer:


The film is in limited release, but keep an eye out for a chance to view it. You can also watch it on Yidio or Hulu Plus.

Hard to believe, but word from some pretty reputable music types insists that Bob Dylan has hit a home run with some Frank Sinatra covers – and with some other crooners -- on his latest album “Shadows in the Night.”

Who would have thought? Dylan at 73 years old, covering Sinatra?

Caught him at his latest gig in Philly about a month ago, and truth be told, when I went home to a dog with Kennel cough I thought I was hearing the encore.

Closer to home, take a listen to local guys Dr. Dog “Live at a Flamingo Hotel”, and all props to the re-united Pixies for their triple album “Doolittle 25”.

Some big shows coming to Philly this summer, but a night to circle is Friday July 24th when Diana Krall appears at the Mann with the Philadelphia Orchestra.

One of the most common complaints of sports fans is that the players make WAY too much money, and that is why tickets to sporting events are astronomical.

On the surface, it seems reasonable to assume that if the average salary in the NBA is $5 million, the ticket price would reflect that outrageous number. The same case could be made Major League Baseball at $3.2 million average salary, the NHL at $2.4, and even the NFL at $1.9.

However, those salaries really have little to do with the price of the tickets. Much like just about every other business in the United States, the professional sports leagues just use the tried-and-true American standard of letting the market place set the price.

And if you want to see how true that remains, check out the price of gasoline.

A short time ago, when the price of gas was over $4 a gallon, we were all buried with additional charges. After all, somebody had to absorb the cost, and everybody from landscapers to pizza merchants to the airlines added in some extra cost.

Now, with gasoline hitting incredibly low prices, have you seen a drop in associated prices? The fact of the matter is that airlines are booked solid, and that is why the price of travel remains high. The demand is great, so the price is higher.

It is just American economics.

Like all teams, the Phillies, Flyers, Eagles and Sixers get what the market will bear. The only reason for salary caps is so the companies that own these teams can make a percentage of profit – and you will never see a league demand a “salary cap” on ticket prices.