Should the Eagles trade Gardner Minshew to the Cowboys? 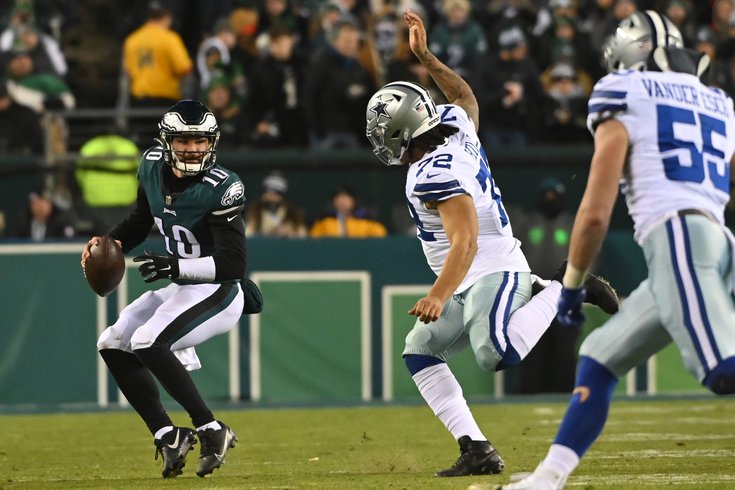 Gardner Minshew against the Cowboys.

Cowboys quarterback Dak Prescott suffered a thumb injury on Sunday Night Football and will need surgery. He'll be out for a bit, a devastating turn of events for a Cowboys team that definitely viewed themselves as true contenders.

Dallas, as of now, will be trotting out Cooper Rush as their starter in the aftermath of Prescott going down. Ahead of this season, I ranked all the backup quarterbacks in the NFL. Rush came in last at 32nd. For a quarterback that's had some injury issues in the past, it's malpractice for a team like the Cowboys not to have a capable QB2 if you have Super Bowl aspirations. I'm sure Eagles fans aren't complaining about Dallas' depth chart situation, but it's a huge oversight in the Cowboys' roster construction.

I saw this tweet on Monday morning regarding how Dallas could help their potentially sinking ship:

Under no circumstances should the Eagles be in a hurry to help out their bitter rival and their toughest obstacle to winning the NFC East. That should be obvious. Even if the Birds somehow got a second-round pick for Minshew, which I highly doubt, it leaves a glaring hole on their own team. The Eagles love having talent down the QB depth chart. It's smart and it's because of that emphasis that the team won the 2017 Super Bowl and now have Jalen Hurts in a starting role.

If Hurts goes down, the Eagles aren't turning things over to Ian Book. They acquired Minshew last offseason to be a high-level backup to Hurts. Hurts missed one start due to injury during the 2021 playoff race. Minshew stepped in against the Jets in the Meadowlands, tossed a couple of touchdowns and led the Birds to a win. If Reid Sinnett or whoever was out there instead of Minshew, the Eagles don't reach the postseason last year.

Again, the answer to this article's title is a resounding "no." Sorry, Jim.