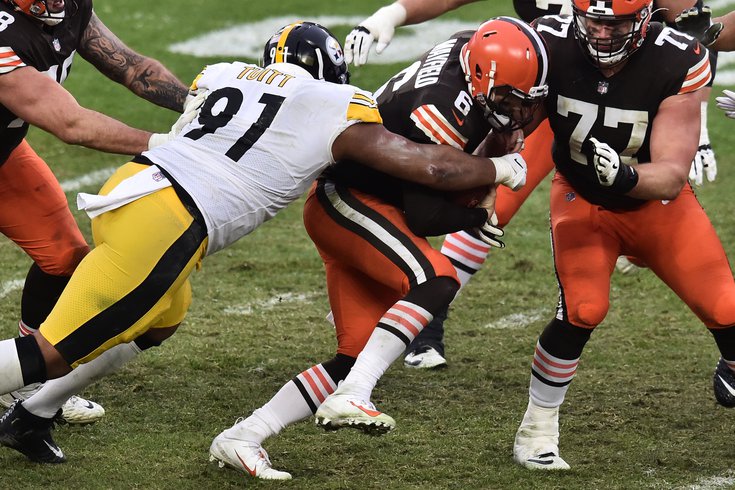 The Steelers and Browns will play again for the third time this season.

The only thing better than getting two Wild Card playoff games per day the first weekend of the NFL's postseason would be to get three a day — which is what football fans will be rewarded with thanks to playoff expansion this season.

For both gamblers and plain old gridiron fans, the slate of matchups is both intriguing and extremely competitive (well, mostly... cough cough WFT), with things kicking off at 1 p.m. on Saturday.

As we did all regular season long, we'll do our best to provide some insight for each of the playoff rounds as we break down the spreads (courtesy of TheLines.com) for every NFL Wild Card Weekend game.

The Bills are red hot to say the least. They've won six in a row and nine of their last 10 to end the season. They boast a real MVP talent in QB Josh Allen and the best wide receiver in football in Stefon Diggs. They will be hosting their first playoff game in decades and are rightfully huge favorites in this game.

However, the Colts defense is one of the best units in the game and they are no slackers themselves, with rookie RB Jonathan Taylor finishing the season extremely strong (he had 253 rushing yards and two TDs last week) as Indy went 6-2 down the stretch. Still, the firepower possessed by the Bills — who have beaten opponents by an average of 19.8 points per game during their win streak — makes them appear to be on a collision course with the No. 1 seeded Chiefs.

The Seahawks and Rams split their two regular season meetings this year, and neither really jumps off the page as a clear favorite at first glance. After a ferocious start, Russell Wilson and the Seattle offense fell back to earth later in the season, while the inconsistent Rams somehow lost to the Jets, and have benefitted from a very easy schedule to say the least.

It seems like every year there is at least one playoff team relying on a back up quarterback and 2021 will be no different, as a broken finger threatens to keep Jared Goff from being able to suit up. Do you have faith in John Wolford to lead L.A. to victory on the road? I don't.

A line of 8.5 doesn't seem like enough points for Washington. With the Eagles very clearly intentionally tanking, Washington was incredibly close to losing in Week 17 despite trying as hard as they could to win the NFC East.

WFT might be the worst team ever to advance to the playoffs, and Tom Brady and company should run circles around them.

MORE: Howie Roseman says he 'can't even imagine' Carson Wentz not being on Eagles

The first of two fantastic matchups on Wild Card Day 2, the Ravens will have revenge on their minds after they were shocked and upset by Tennessee last postseason — a game they were heavily favored in. While the Ravens have been worse on both offense and defense this years than last, they've got momentum, riding a five-game win streak into the playoffs.

The Titans, as we learned last year, shouldn't be taken lightly, however, as quarterback Ryan Tannehill continues to show he can make big-game throws, and Derrick Henry is one of the nastiest running backs in recent memory (he ran for over 2,000 yards this season!). This will be a great matchup and is deservedly the closest line of the weekend.

Chicago kind of fell backwards into this final NFC Wild Card spot, losing their last game and sliding in thanks to help elsewhere with an 8-8 record. Mitch Trubisky will once again carry the fate of Chicago along with him, against a defense in the Saints that gave nearly every single team they faced fits in 2020.

With a healthy Drew Brees, Alvin Kamara and Michael Thomas, the Bears will have their hands full in the Superdome trying to slow down a potent Saints offense as well.

In two meetings in the AFC North this season, Cleveland and Pittsburgh split their games. However, the Steelers got worse as the season went along and the Browns got better. After an 11-0 start Pittsburgh crawled to a 1-4 finish to the year. Ben Roethlisberger rested in Week 17 (as the Browns beat the Steelers to end their postseason draught) and the hope is that a healthy Big Ben is an effective Big Ben.

Meanwhile, the Browns will hope they get the good version of Baker Mayfield to help change things up when they aren't relying on a two-headed monster on the ground in Nick Chubb and Kareem Hunt, who combined for over 1,800 yards and 18 touchdowns on better than five yards per carry. Keeping the ball in their hands for most of the game will be their winning strategy.