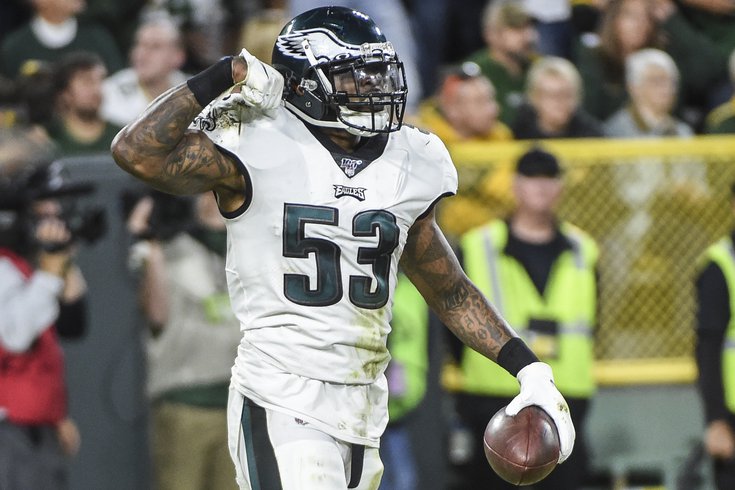 Nigel Bradham, a linebacker on the Eagles team that won Super Bowl LII, was arrested in Florida on Saturday after troopers allegedly found more than three pounds of marijuana in his car during a traffic stop.

He was released from Leon County jail Sunday on a $1,000 bail, according to the Tallahassee Democrat.

The NFL veteran was stopped by Florida Highway Patrol officers because the tag on his 2021 Chevrolet Corvette did not match records, according to the affidavit. Officers said there was a strong smell of marijuana emanating from the vehicle.

Bradham allegedly told the troopers that he was registered in Florida to possess marijuana for medical use, but that he didn't have identification on him at the time.

However, Bradham's name didn't come up after cops conducted a state registry search, according to the affidavit. Medical marijuana is legal in Florida, but adult-use recreational cannabis remains prohibited.

During a search of the Corvette, police allegedly found 10 small plastic bags and two large bags of marijuana, all with retail sales logos from California. The bags were found in a suitcase in the vehicle's trunk and in a green and black satchel in the front passenger seat, according to the affidavit.

Bradham told police that he bought the car in Georgia and had produced temporary tags for the vehicle, according to police. He recently had tried to get the tag on the car transferred from a Dodge van he owned.

Bradham's license was found to have been suspended for insurance earlier this month, police said. He was ticketed for unknowingly driving with a suspended license and given a warning for having an improper tag display.

Located in the Florida Panhandle, Leon County is home to the state capital, Tallahassee, and Bradham's alma mater, Florida State. Bradham is from Crawfordville, Wakulla County, which is about a 30-minute drive south of Tallahassee.

This is not Bradham's first run-in with the law. He was charged with aggravated battery in July 2016 for allegedly assaulting a cabana boy over an umbrella in Miami. Later that year, Bradham was arrested for allegedly carrying a loaded gun through security at Miami International Airport.

Bradham was taken in the fourth round of the 2012 NFL Draft by the Bills. He played four years in Buffalo before joining the Eagles in 2016. His four-year tenure in Philadelphia was highlighted by the franchise's first Super Bowl title.

Bradham last played in the NFL with the Broncos in 2020.