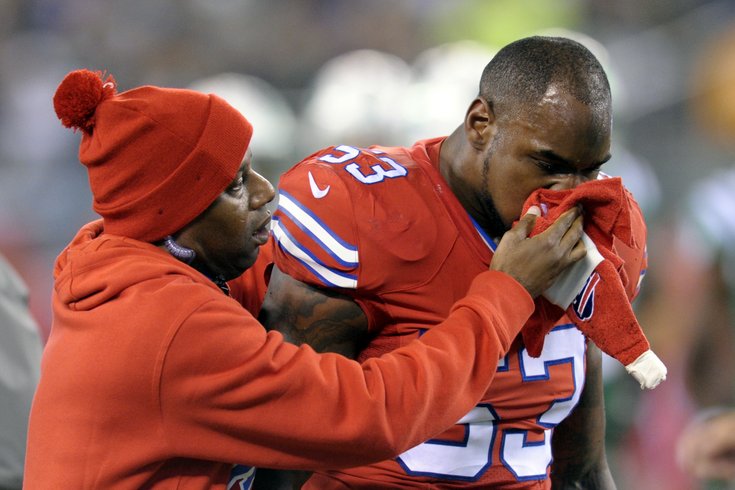 He who has not assaulted a cabana boy over an umbrella, let him cast the first stone. Didn't think so.

Yes, you read the headline correctly. According to NBC 10 in Miami, Eagles linebacker Nigel Bradham was arrested on Monday following an incident in which Bradham reportedly beat a cabana boy over an umbrella at the Hilton Bentley hotel last Thursday.

According to statements, a group of six people started arguing with the employee over the length of time it took to bring them an umbrella they had paid for. The verbal argument became physical, with the victim sustaining cuts and lacerations, including one to the back of his head when a glass battle was allegedly smashed over it.

The six people then fled the scene, running toward Ocean Drive and entering a vehicle before speeding away. A phone was discovered at the scene, which was turned over to police as evidence along with a receipt showing Bradham paid for the umbrella with his credit card.

The Eagles released the following statement:

“We are aware of the recent incident involving Nigel Bradham in Miami. We have been in contact with Nigel and the proper authorities. Due to the ongoing legal process, we will have no further comment at this time.”

Bradham was a free agent acquisition of the Eagles this offseason, and is expected to start at the SAM linebacker spot in 2016 alongside Mychal Kendricks and Jordan Hicks. Bradham had his best season under new Eagles defensive coordinator Jim Schwartz in 2014 when he had 104 tackles, 2.5 sacks, 2 forced fumbles, an INT, and 7 pass breakups for the Buffalo Bills.

The Eagles have very little in the way of depth at linebacker. If Bradham is forced to miss time due to NFL disciplinary action, it is likely that reserve linebacker Najee Goode would take his place, barring another linebacker acquisition.

Goode and Deontae Skinner are the only Eagles backup linebackers with any NFL experience at all, and even then, Goode only has one career start, which came in 2013. The Eagles also have rookie Joe Walker, Travis Long, and undrafted free agents Myke Tavarres and Quentin Gause rounding out their linebacker depth.