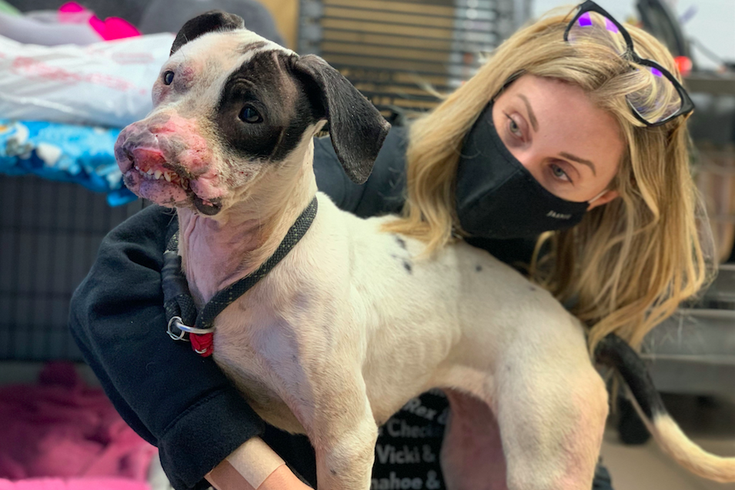 Lavender, affectionately nicknamed Lovie, was rescued by the Pennsylvania SPCA after she was found tied to a tree in Pennypack Park in Northeast Philadelphia. She had suffered severe injuries to her face in the past. An investigation is open and active.

Human law enforcement officers are searching for answers after a dog was found tied to a tree in Pennypack Park on Monday morning, having suffered severe, disfiguring injuries to its face, the Pennsylvania SPCA announced.

The dog, a female pitbull mix named Lavender, was found abandoned in the Northeast Philly park and reported to the city's Animal Care and Control Team.

Humane officers immediately transported the dog to the PSPCA's shelter hospital for medical evaluation and treatment.

The facial injuries the dog had suffered were old, resulting in a compromised nasal passageway and no visible nostrils. She is able to breathe through her mouth, but she may never have normal respiratory functioning again.

Veterinarians are working on a treatment plan to help rehabilitate Lavender, but human officers now hope to bring justice to the person or people responsible for harming her.

“While there are many things we do not yet know about Lavender’s story and how she ended up abandoned in the vast woodlands of Pennypack Park seemingly left to die, we do know there is someone out there who knows this puppy,” said Nicole Wilson, director of humane law enforcement at the PSPCA. “We are asking those individuals to do the right thing and come forward to uncover what happened, who did this and to help us bring them to justice.”

Anyone who recognizes Lavender, has information about her owner, or witnessed her being dumped is asked to contact the PSPCA immediately. Information can be reported anonymously to cruelty@pspca.org or to the organization’s cruelty hotline, (866) 601-7722.