Northern lights may be visible in Pennsylvania on Thursday night 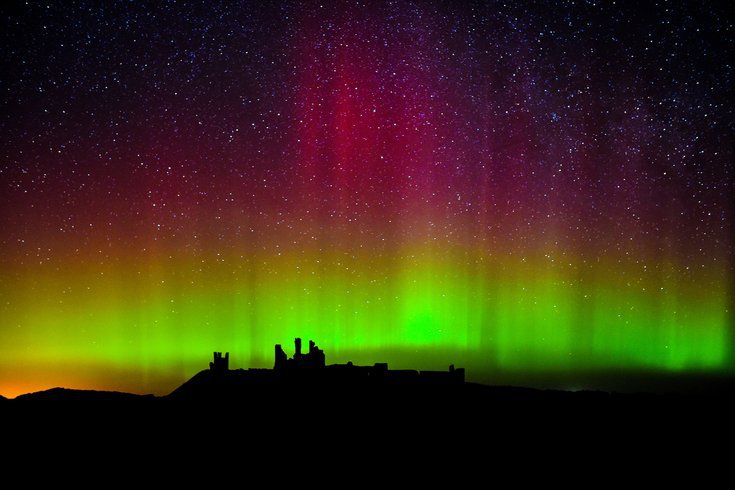 Aurora borealis forecasts from the University of Alaska-Fairbanks' Geophysical Institute shows a chance of seeing the northern lights in Pennsylvania on Thursday night, Dec. 10. Stargazers will likely have to travel north of Philadelphia to catch a glimpse. The photo above shows the norther lights in the sky above a castle in England.

A combination of atmospheric events may give some Pennsylvania residents the chance to see the colorful northern lights over the next few nights, according NOAA scientists and geomagnetic storm watchers.

LATEST: How to watch the Geminid meteor shower at its peak Sunday night

The NOAA's Space Weather Prediction Center put a Geomagnetic Storm Watch into effect from Dec. 9 through Dec. 11, with the strongest storm level (G3) forecast for Thursday night, Dec. 10. The storm level drops to G2 on Friday night, reducing the probability that the aurora borealis will be seen this far south.

The aurora forecast from the University of Alaska Fairbanks shows that stargazers may be able spot auroral activity into Pennsylvania on Thursday night.

#Aurora forecast looks good tonight! This is one of the first CMEs (coronal mass ejections) of the newest solar cycle – the biggest so far and aimed right at Earth. This means you may not need to stay up so late to see some aurora!@UAFGI aurora forecast: https://t.co/7CCzR6kOom pic.twitter.com/hV4rvhkct3

The Space Weather Prediction Center has a more conservative estimate of the aurora's visibility, though some activity may still be observed.

So there is a lot of buzz about potential #SolarStorm heading our way. The SWPC issued a G3 Geomagnetic Storm Watch for Thursday, Dec 10th. Yellow line on the map shows the furthest southward potential for the #NorthernLights could be observed.https://t.co/peTr0Sbefw#OHwx #PAwx pic.twitter.com/4RMWXcZYTB

Catching a glimpse of the northern lights won't be an easy feat, but clear skies across much of Pennsylvania and the Northeast U.S. will be a big help.

Remote areas that are distant from light pollution will be the best places to be on the lookout. Locations such as the Poconos are ideal, but some areas in the Delaware Valley may be suitable on Thursday night, as well. Look for the aurora borealis to be visible low on the horizon.

On Dec. 7, a large solar flare coincided with a coronal mass ejection to create the conditions we're seeing this week.

The visibility of the colorful light seen in an aurora is extended on Earth when these two events create a large geomagnetic storm.

"When the electrons and protons from the sun collide with oxygen and nitrogen in the Earth’s atmosphere, they gain energy," UAF scientists explain. "To get back to their normal state, they release that energy in the form of light. The principle is similar to what happens in a neon light. Electricity runs through the light fixture to excite the neon gas inside, and when the neon is excited, it gives off a brilliant light."

The most common color seen during these events is green, but there is a possibility that shades of red, pink or blue will be visible, too.

The videos below provide a deeper explanation of what causes the northern lights and how they appear in their most visible locations in the Arctic Circle.