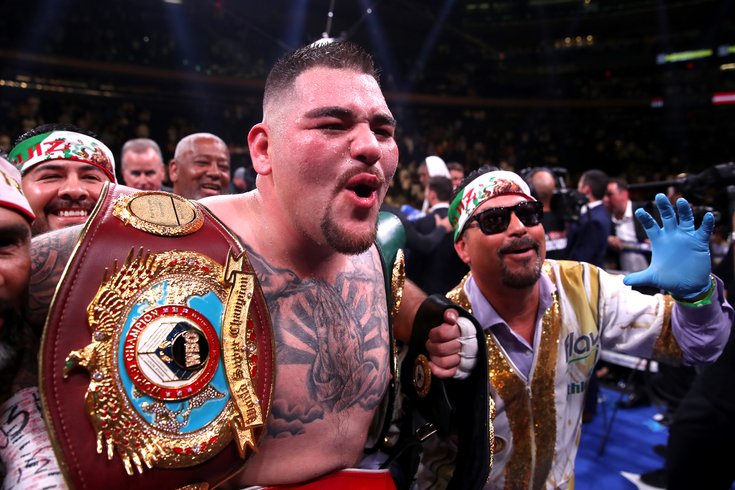 NEW YORK, NY — It was around three o’clock, last Friday afternoon and Bob was already quite lubed. And he was going for more, somehow able to keep his balance leaning over a metal railing partition in Madison Square Garden, while possessing the unique skill of only spilling a few drops of beer out of the clear plastic cup he held aloft in his right hand like a torch.

The English travel well — especially when it comes to supporting their fighters.

Bob was one of about 8,000 that traveled from England to see world heavyweight champion Anthony Joshua make his U.S. debut on Saturday, June 1 at MSG. Dressed in a Union Jack t-shirt, Bob, or was it “Boob,” made little sense. Save for when he chimed in with the thousands of other chanting Brits, his slurred screams became a more comprehensible: “Who are ya? You fat bastard!”

About to step on the scale for the official weigh-in, the invective was aimed at doughy Andy Ruiz Jr.

He’s heard it all of his life.

Last Saturday, Ruiz (33-1, 22 KOs) was knocking down more than the 6-foot-6, 247-pound Greek sculpture Joshua (22-1, 21 KOs) in one of boxing’s upsets for the ages, he was also quashing everyone who ever called him “fat,” put him down for being “flabby” and for those who ever doubted him.

“There are some things you just never forget,” said Ruiz, 29, an hour after he wrested the WBA, IBF, WBO and IBO heavyweight world championship belts away from Joshua at 1:27 of the seventh round, spoiling Joshua’s American debut. “I used to get called ‘fat kid’ when I was younger, and when you’re a kid, words can hurt. This is really a blessing.

“I can laugh now. I can hold up a Snickers (candy bar), talk about my flab and laugh about it. My whole life I’ve had people doubt me for the way I look. But that didn’t stop me. I think it’s made me stronger. This has always been a dream of mine — to win the heavyweight title. No one thought I would beat Joshua. No one!

“Everyone was putting me down. They look at me and think I can’t fight. Well, I can fight. I proved that by beating Joshua, the heavyweight champion of the world. Now, I’m the first Mexican heavyweight world champion. There was a lot of frustration being taken out in that ring. I got knocked down (in the third round against Joshua) and I got back up. Everyone thought I was done when that happened. All I ever asked for was a chance. I got that chance and showed what I can do.

Ruiz is living proof of that.

His ascension atop the boxing world — for that matter, the sports world, since Ruiz was the top trending athlete on Twitter last weekend — is a true Rocky-to-riches story. Ruiz, who’s 6-foot-2, and weighed in at 268 pounds, took the fight in late April. He was a late substitute after Joshua’s original opponent, Jarrell “Big Baby” Miller, was disqualified after failing three pre-fight drug tests. Then when Luis Ortiz priced himself out and Adam Kownacki turned down the offer, Matchroom Boxing, Joshua’s promoter, turned to Ruiz, who splashed Alexander Dimitrenko in five on April 20.

Eddie Hearn, Matchroom’s chief, was expecting a fight. What he received was Buster Douglas-Mike Tyson-esque.

“This was not a coincidence, it was not a fluke,” said Manny Robles, Ruiz’s trainer. “I thought Andy would win. I truly did think that. I will admit, I didn’t think he would win the way he did. I always believed in Andy and I needed to keep him focused. I told him a year ago that this would all happen.

“We spoke about landing the overhand right, and I saw Joshua had that weakness with the right hand. We came in with a good game plan and it couldn’t have worked out any better. What Andy did is really remarkable, and yes, I would say old-school. Andy Ruiz Jr. fought twice within two months and stopped both guys he fought.

“This was no coincidence. The world saw what happened.”

For Ruiz, life changed quickly. People that never heard of him before were pulling at him.

Within a few days, he made a national TV appearance on Jimmy Kimmel. People know him everywhere he goes in his hometown of Imperial, California, population 17,550, made up of primarily Mexican- and Latin-Americans. Now they’re coming out of their homes to greet him and take pictures with him.

A rematch clause was in the Joshua-Ruiz contract, which garnered Ruiz his highest payday, reportedly in the range of $2.5 million. Hearn wants the rematch as quickly as possible — and that might mean a trip to England for Ruiz sometime in November or December.

In the meantime, the improbable king of the heavyweight division, along with WBC champ Deontay Wilder (41-0-1, 40 KOs), is enjoying every moment of his newfound fame.

“I did something no one expected me to do, I shocked the world,” Ruiz said. “I know what it took to reach this, and I know what it will take to keep these belts. I’m not going to let these belts go. When I came in (to MSG Saturday night), everyone was booing me. When I left, they were cheering me.”

Around 1 a.m. on Monday, roughly 48 hours after his monumental upset, he was still being lauded. Ruiz was standing in line at Albert’s Taco Shop, in Pico Rivera, California. The cooks in the back did a double take.

“They kept staring at me, and staring me, and they were like, ‘Man, is it you, is it really you?’” Ruiz recalled. “At first, I didn’t want to say, yes, because I’m still really getting used to all of this. But the cooks and everyone in there recognized me, and it was crazy, man. Everyone stopped cooking, and everyone in the restaurant stopped and wanted to take pictures with me.

“I still have to get used to all of this attention.”

For the frenzied, stumbling British fans that chanted, “Who are ya? You fat bastard!”