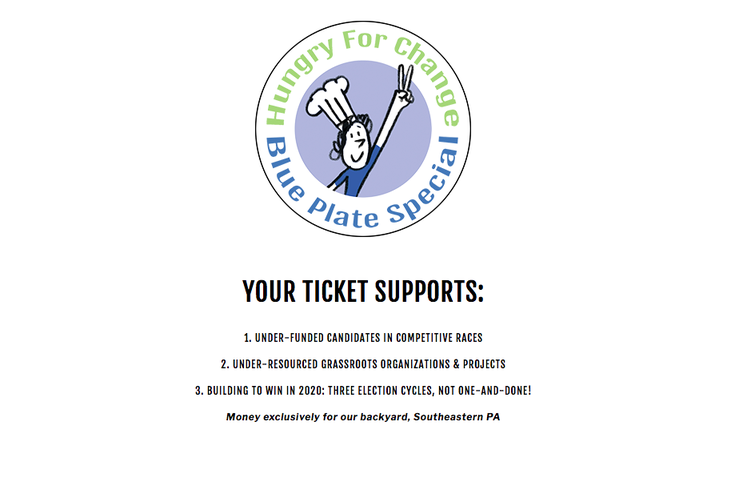 Philadelphia culinary legend Steve Poses has created his proudest dish yet: The Blue Plate Special. Nearly 40 of the city’s top chefs will join 35 local candidates at the Franklin Institute for a culinary fundraiser to help turn Pennsylvania "blue." Former Gov. Ed Rendell will serve as the honorary executive chef, manning the slider station at the event.

When Philly’s two-time mayor and district attorney – to say nothing of Pennsylvania’s Governor – Ed Rendell talks about the necessity of pushing Democratic voters to the polls, you listen. That’s his job, and his passion. When Rendell says that he’ll encourage your vote for the Dems by cooking you hamburgers, now you’re really curious.

Co-Founded by Rendell and Poses, the PA Blue Victory Fund is looking to get Philadelphians to vote Democrat when they say the need is at an all-time high. This party, at the Ben Franklin Institute, then, is for fun, good food and fundraising.

We caught up with Rendell – in a talkative mood – in his downtown Philly office.

Q: What does turning PA blue mean to you?

A: There’s a lot of emphasis right now in the political world about Congress, about turning the House of Representatives in Washington blue, and making sure we have a Democratic majority. It’s important that all of us [are] working hard toward that goal. But one of the problems is that terrible redistricting that was done in 2012, all over the country, in various states. There are many social policies coming up to vote on that can’t be left to chance.

For example, the Medicaid expansion which is an important part of the Affordable Health Care Act – that was voluntary, and up to the individual states to do. In Florida, for example they refused it, and now, countless people who need care, aren’t covered. So, 'Turning PA Blue' is important in making sure certain upcoming bills and referendums don’t get overlooked.

Q: Do the Dems have a pretty good shot at winning a majority of races in November?

A. The polls all show that the enthusiasm gap is in favor of the Democrats, that 10 percent more Democrats are likely to vote than Republicans, and considering that there are more registered Democrats in this state than Republicans, it's a good sign. So, we might not have the House of Representatives or the state Senate in Pennsylvania, but we’ll make significant gains. That’s important as they’ll help Governor [Tom] Wolf in his second term get more of his agenda passed.

Q: Without getting you in trouble, who do you like for a Democrat nominee for President?

A: I’d still like to see Vice President Joe Biden run. I think that he’s the best bet we have, especially to get back those Democrats who voted for Donald Trump. I’d like him to run, and pledge that, because of his age, he’d only serve one term. He wouldn’t have to worry about his approval ratings, so that he can do as he pleases in regards to what’s right for the country. And then pick a younger Democrat as his Vice President, and his potential heir apparent.

Q: That’s why you’re a Dem strategist. Let’s talk turkey – how do you know Steve Poses?

A: I know him from the Frog days, from when he started the first high-end restaurant in Philadelphia. That kick-started this city’s restaurant revolution.

Q: How did you two get together on this organization and this fundraising event?

A: The event was his idea. He’s as passionate as I am about getting the Democrat vote out. The rest is history, and we’re going to have fun.

Q: A large part of that fun, though, is going to come from the fact that you are acting as a “guest chef” cooking something from your own kitchen, yes?

A: To be accurate, I teach classes at University of Pennsylvania, from 6 [p.m.] to 9 [p.m.]. In deference to this event, I’m ending at 7:45 [p.m.], and coming to the fundraiser. There will be a station for me with chefs cooking my recipe, and I’ll hang out at my station after that.

What I like to cook at home – my recipe – and what the chefs will prepare that night in my name, is the way I cook hamburgers. I cook them in a skillet. Before I put the meat in, I chop up onions, then put butter, Worcestershire sauce, lemon, and ketchup into the pan, and I make sure everything melts and blends together. Then I quick-fry them in a pan, and that’s what we’ll serve that night. To be honest, that’s all I cook. I may throw a steak into that same pan with the same sauce. These days, it’s too easy to order out from GrubHub or Caviar.

The Blue Plate Special takes place this coming Monday, Sept. 17, at 7:30 p.m. at the Franklin Institute. For tickets and more information, click here.