The Hawks are looking to become the first 'large school' in Pa. to four-peat as state champs 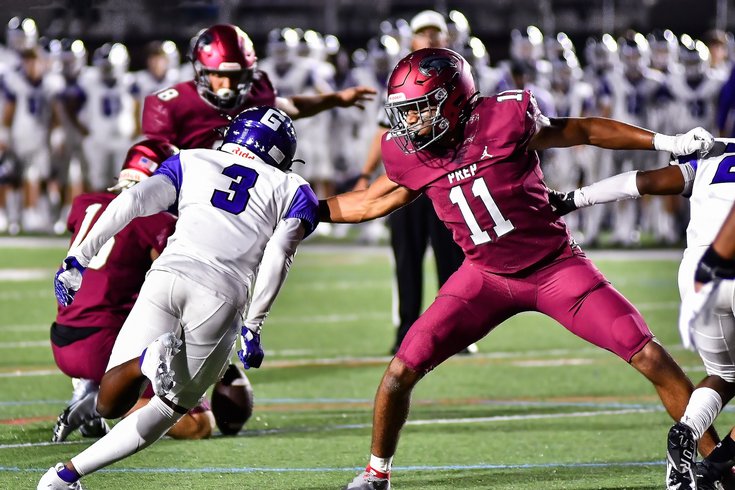 Let's take a closer look at each of those matchups, starting with the Hawks...

This Saturday, Prep, ranked No. 1 by PhillyVoice, will play Mount Lebanon (14-0) at 6 p.m. at Hershey Park Stadium in the PIAA Class 6A championship. Friday night at 7 p.m., Imhotep Charter (11-1) will play District 7 champion Penn-Trafford (12-2) in the Class 5A championship.

This is the eighth trip to the state finals in the last nine years for St. Joe’s Prep, which can become the first four-peat state champion at the 6A level since it was put into place by the PIAA in 2016. This will mark the sixth 6A state title game in Pennsylvania and the Hawks have been in each one.

RELATED: St. Joe's Prep advances to another state final after knocking off Garnet Valley in 6A semis

This has not exactly been a typical Prep season. They have gone through some growing pains, though are peaking at the right time. They rolled over archrival La Salle, 35-7, in the Catholic League Red Division championship; and 49-13 over previously undefeated Garnet Valley in the state semifinals.

“I think the adversity these guys faced earlier in the year allowed them to reset and made them realize they have to prepare a certain way,” Hawks head coach Tim Roken said. “As we prepared better, we started to see the fruits of our labor. We’ve continued to grow and the seniors have done a great job in terms of helping the staff coach these guys.

“Our staff does a great job preparing these guys, [but] it’s up to them to perform.”

Sophomore quarterback Samaj Jones has been coming on. His best game to date was his last, directing the Hawks to a state semifinal victory by running for four touchdowns and throwing for three more against Garnet Valley.

“This is a talented group that appreciates the little things,” Roken said. “Communications has been huge, and we put a huge emphasis on special teams. We make sure we don’t have consecutive bad days of practice. As the year has gone on, we’ve learned how to prepare.

“The practice week should be harder than the game and these guys get that.”

This will be Mount Lebanon’s first trip to the PIAA Class 6A state finals, but not for Blue Devil head coach Bob Palko, who's in his third year at Mount Lebanon and is making his fourth trip to the state finals after the first three came as the former West Allegheny coach. Palko is 1-2 in state championship games, last winning a state title in 2001.

Right now, the Panthers may arguably be the best team in the state. They’re giving up a statewide low 3.5 points a game in the postseason. Imhotep got here by stomping Strath Haven in the state semifinals, 36-0, and routing Erie Cathedral Prep, 42-7, in the state quarterfinals.

While the Panthers’ offense is just starting to come together behind sophomore running back Tre McLeod, who exploded on Erie Cathedral Prep for 289 yards on 12 carries, including touchdown runs of 80, 64 and 44 yards, it’s defense that got Imhotep here. Led by Enai White, the No. 1-rated edge rusher in the country, and Penn State-bound end Keon Wylie, the Panthers have only given up double digits twice this season and have mercy-ruled their last five opponents (excluding the Olney Charter forfeit).

This is Penn-Trafford’s first trip to the state finals, after the Warriors won their first WPIAL championship in school history. Senior tailback Cade Yacamelli, a Wisconsin commit, rushed for 1,766 yards (10.2 yards/carry) and scored 28 touchdowns. Senior quarterback Carter Green threw for 1,216 yards and 12 passing TDs, while rushing for 1,130 yards and 15 TDs.

“Penn-Trafford has good size up front, and they’re a spread team that runs a lot,” Imhotep Charter coach Devon Johnson said. “We’re prepared for one of those dog fights where we have to win the line of scrimmage. We know this is their first trip to the states, and they’re fired up about that.

“We’re clicking at the right time. We’re playing complimentary football at all three phases. We’re playing confident and one thing we’ve been eliminating are the penalties. We want to control our emotions and we know as a staff knows what we can be successful with. Everyone is locked in and it’s matter of executing and hopefully we save our best performance for last.”