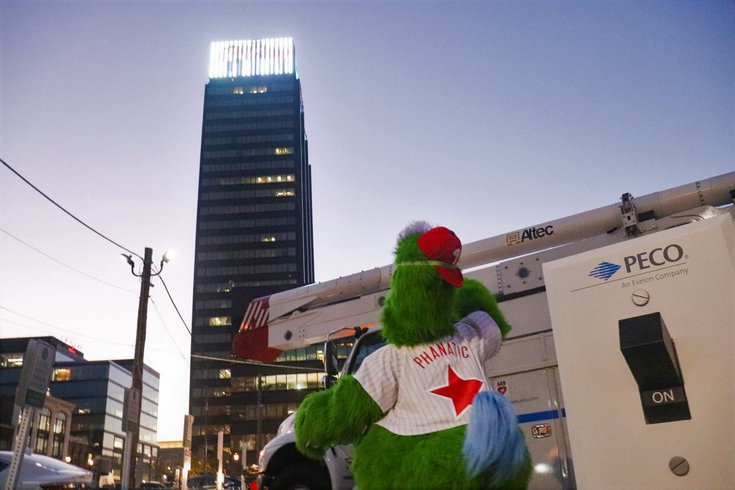 The crown lights atop the PECO building, located at 23rd and Market streets, have returned to the Philadelphia skyline after a four-month hiatus for maintenance and system upgrades.

After four months of darkness, the PECO building's iconic crown lights in Center City have been flipped back on at 23rd and Market streets.

The utility company's crown display has been a feature of the Philadelphia skyline since 1976, when it first began scrolling messages from community and non-profit organizations.

In early July, the company announced the display would go dark in order to undergo routine maintenance and software upgrades. You'll now notice increased brightness, sharper quality graphics, and an improvement in resolution from 39 pixels per inch to 25 pixels per inch. The display is made up of more than two million LED lights.

If you drive into Philly you will once again see the lights shining on top of PECO's building at 23rd and Market streets in Philadelphia. The lights are now brighter than ever thanks to the upgrade. https://t.co/3ODNdHV67G pic.twitter.com/vQxGpKJ1q7

The Phillie Phanatic was on hand Monday afternoon to flip a giant light switch, bringing to life the vibrant new display atop the 25-story building.

“The crown lights are a great way for us to support our commitment to the city of Philadelphia by putting up messages every night to highlight many things that are important to the city” said PECO CEO Mike Innocenzo. “We took the lights down in July of this year and today we’re happy to bring them back as part of the Philadelphia skyline. They’ll be brighter, more energy efficient, and will have denser pixels so we’ll be able to show more dynamic messaging.”

Over the years, PECO's crown lights have displayed more than 17,500 images, including those celebrating the Philadelphia Phillies' 2008 World Series win, the Philadelphia Eagles' Super Bowl LII victory, the 2016 Democratic National Convention, and countless other memorable moments.

With the return of the crown lights, PECO ran a special tribute to Philadelphia on Monday night that will play for a second time on Tuesday night.

The most recent hiatus was the first time the crown lights had gone dark since 2009.

“The Crown Lights help non-profits, whether they are their partners or they are just organizations promoting something significant that fold under our pillars of giving,” said PECO director of corporate & community relations Romona Riscoe-Benson. “We’re glad to have this resource back.”