New renderings show Penn's Landing park that will cap I-95

Construction on the 11.5-acre park in Old City is expected to begin later this year. The South Street pedestrian bridge also will be extended 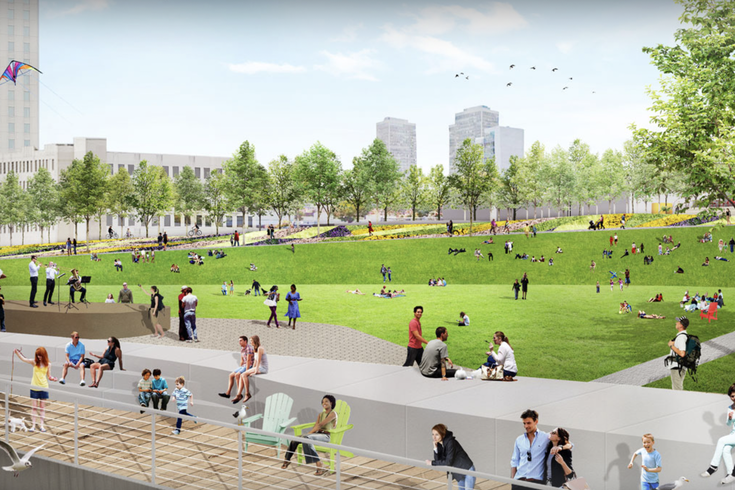 A planned park at Penn's Landing will bring an 11.5-acres of green space to the Delaware River waterfront in Old City. The park will cap I-95 and Columbus Boulevard.

A new park at Penn's Landing that will cap I-95 and better connect Old City to the Delaware River waterfront is among Philadelphia's most anticipated development projects.

The $225 million project, led by the Delaware River Waterfront Corporation, has been in the making for nearly a decade, a major undertaking that will bring together several local, state and federal agencies. Momentum for its completion has ebbed and flowed, but it now appears construction could begin later this year.

A presentation last month at a meeting of the Society Hill Civic Association provided the latest look at park renderings and updates on the anticipated timeline. The city had been eager to complete the park in time for the city's semiquincentennial celebration in 2026, but it now appears unlikely that it will be finished by July 2026. However, it could be done by later that year, according to OCF Realty.

The new park will include an ice rink, public gardens, a play area, a pavilion and cafe, public gardens, memorials and an amphitheater at the bottom of a slope on the park's north side, against the waterfront. 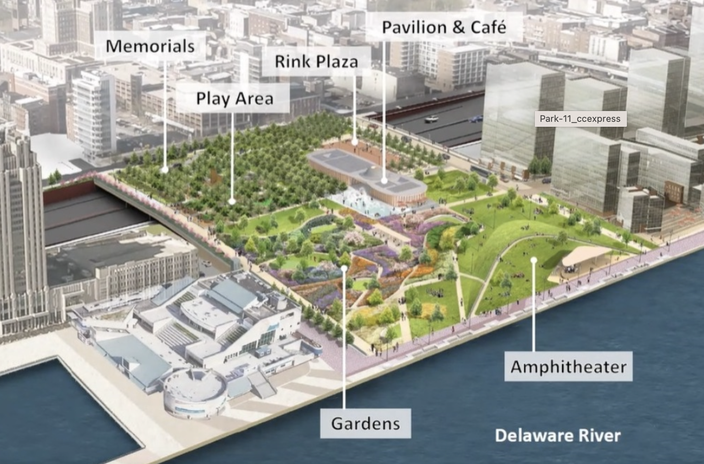 Courtesy/KierenTimberlake
The renderings below come from KierenTimberlake and HargreavesJones, who are directing the project's architecture and design. The park's look has evolved through different stages of planning. 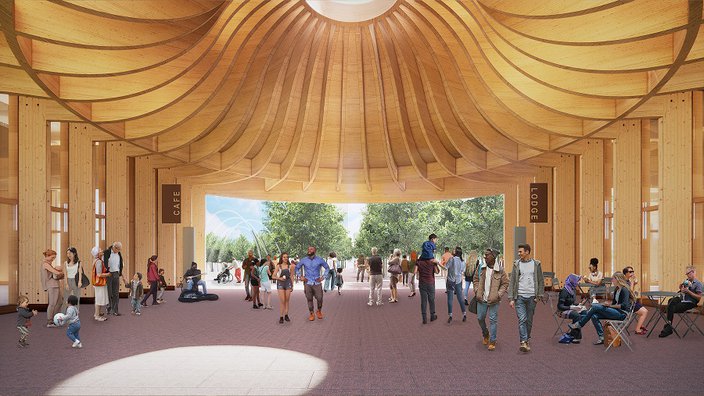 The Breezeway planned at the Park at Penn's Landing. 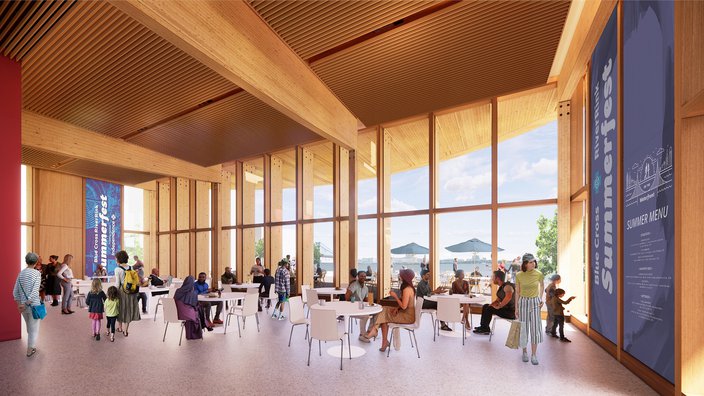 The cafe planned at the Park at Penn's Landing. 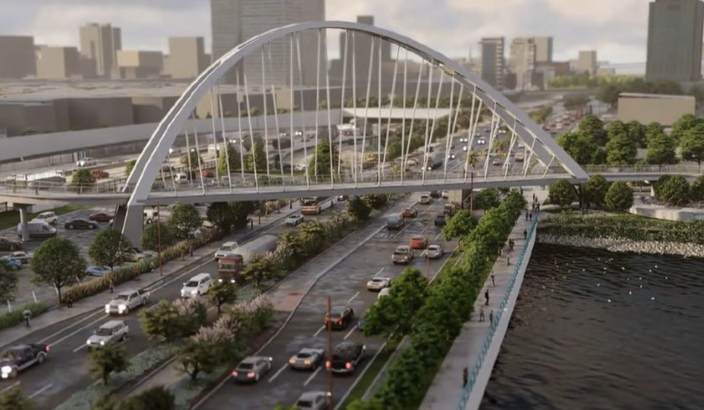 A rendering of the planned extension of the South Street pedestrian bridge over Columbus Boulevard.

Direct public access to the central Delaware River waterfront has been absent from Philadelphia since the I-95 corridor was completed in the late 1970s.

The park will be a complementary but separate piece from The Durst Organization's $2.2 billion redevelopment of land just to the north. That project includes 12 new buildings on two waterfront sites with a mix of apartments, retail space, a hotel and other new public spaces.

At the March presentation, planners said the park's construction will include a series of regional and local detours — mostly overnight closures — that divert I-95 traffic onto the Vine Street Expressway and I-76 before reconnecting with I-95 near the Philadelphia International Airport, according to Hidden City. Local detours will focus on Columbus Boulevard for the construction of the cap, moving traffic to Fifth and Sixth streets via the exit at Callowhill and Race streets, before returning on Spruce and Vine streets.

Those detours will shift south for the South Street pedestrian bridge phase of the project, again directing traffic along Fifth and Sixth streets via an exit onto Spruce and Pine streets, returning to Columbus Boulevard at Washington Avenue.

The extension of the bridge is meant to improve access to the new park. The bridge currently terminates with a set of stairs and a ramp after crossing I-95, leaving pedestrians to cross Columbus Boulevard.

To further enhance access to the new park, the Delaware River Trail also will run a two-way bike and walking path adjacent to Columbus Boulevard from Washington Avenue to Spring Garden Street.

Another interesting note from the presentation was the absence of a dog park, an issue which had divided opinions about the planning of the space. Given the presence Penn's Landing Dog Park just to the north, as well as other prominent parks that allow dogs, it seems the planners favored leaving it out perhaps for the sake of maintenance and crowds. Once the Durst Organization's apartments start to go up, it will be interesting to see what kinds of spaces might become available for dogs.

The park's infrastructure will be overseen by PennDOT and the Federal Highway Safety Administration, while DRWC will handle programming and site management. The city will own the land.

Short of Spruce Street Harbor Park, some other piers and small green spaces around Penn's Landing, this area currently isn't much of a destination for people to lounge and play. Within five years, it could be one of the most frequently visited amenities in the city.