Most of the creatures were brought to the group's headquarters in Philadelphia, where they will receive veterinary care and possibly be put up for adoption 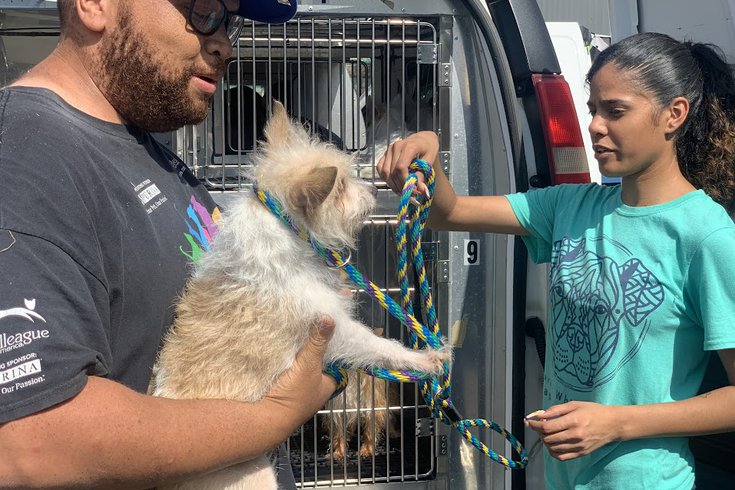 Pennsylvania SPCA rescuers with one of the dogs seized from a property in Quarryville, Lancaster County on Friday.

The Pennsylvania SPCA removed 100 pets and farm animals from a property in Quarryville where they were allegedly held in unsanitary conditions and without proper veterinary care.

"Each of these animals will get the care that they need, and it will be our privilege to put them on the path to new lives free from neglect," said Julie Klim, PSPCA's CEO.

The organization was tipped off by a good samaritan. Officials visited the property on Pumping Station Road on Thursday to confirm the complaint and came back with a search warrant on Friday.

Most of the animals – including the dogs, cats, chickens and ducklings – were brought to the organization's Philadelphia headquarters. The horses, sheep and goat were brought to PSCPA's facility in Danville.

After medical examinations, the animals will be put up for adoption or placed with another rescue organization. The investigation into animal cruelty and neglect is ongoing.

The latest rescue came after one in Philadelphia on June 9. PSPCA rescued 11 animals from a property on the 1500 block of Adams Avenue where they were allegedly held in unsanitary conditions without proper veterinary care, a release from the organization says.

PSPCA seized two dogs, four cats, two guinea pigs, one rabbit, and one cockatoo. A dog who was removed from the property by a relative of the owner at an earlier date was turned over to PSCPA, as well.

Anyone with information about a case of animal cruelty is urged to call the Pennsylvania SPCA’s Cruelty Hotline at (866) 601-SPCA. Tips can be left anonymously.