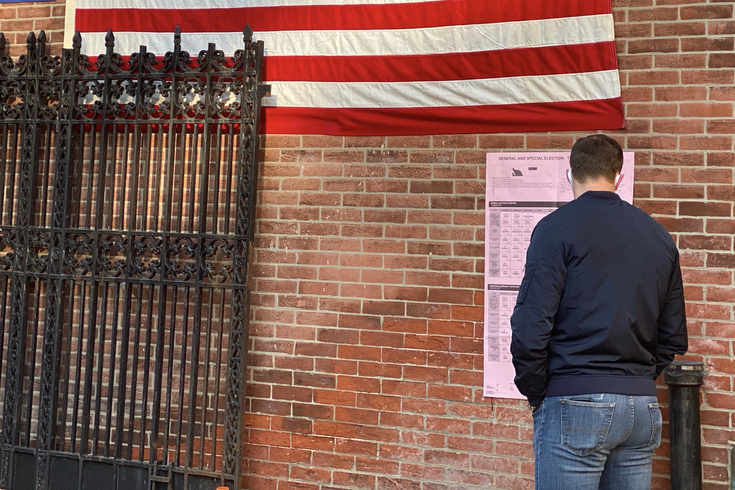 A voter examines a sample ballot posted outside a polling place in Center City on Election Day, Tuesday, Nov. 3, 2020. Election monitors from the U.S. Department of Justice and the Philadelphia District Attorney's Office will be at city polling places Tuesday to ensure compliance with voting rights laws.

Philadelphia will be one of 44 locations across the United States that will have personnel from the U.S. Department of Justice's Civil Rights Division present on Election Day.

Since the passage of the Voting Rights Act in 1965, the Civil Rights Division has regularly monitored a variety of elections each year to protect the rights of voters. It has done so in Philadelphia in prior elections as well.

Civil Rights Division personnel will be available all day Tuesday to receive complaints from the public related to possible violations of federal voting rights laws, either by a complaint form on the department’s website or by telephone toll-free at (800) 253-3931.

Complaints related to disruption at a polling place always should be reported immediately to local election officials, including officials in the polling place.

Complaints related to violence, threats of violence or intimidation at a polling place should be reported immediately to local police by calling 911.

These complaints also should be reported to the Civil Rights Division once local authorities have been contacted.

In addition to the presence of federal monitors, the Philadelphia District Attorney's Office will have an Election Task Force working in close partnership with the Philadelphia City Commissioners and the Philadelphia Police Department to investigate violations of the Pennsylvania Election Code, as well as other criminal activity at polling locations on Tuesday.

"I want Philly voters to be assured that we are all working together to make sure you have a clean and fair Election Day," District Attorney Larry Krasner said. "I do not expect any threats or harassment tomorrow, but let me be clear: Anyone intending to steal Philadelphians’ votes by breaking the law to disrupt a fair and free election could find themselves in a jail cell, facing criminal charges and a Philadelphia jury wondering why you thought it was OK to steal their votes."

More than 90 assistant district attorneys and detectives will be monitoring and responding to voting-related complaints about unlawful electioneering, intimidation and other issues when the polls open at 7 a.m. Tuesday and until the last voter in line by 8 p.m. has cast a ballot.

"Among the rules we expect everyone to follow: only certified poll watchers who live in Philadelphia, election board workers, judges of elections and voters may enter a polling place,” Assistant District Attorney Andrew Wellbrock said. "There can be no electioneering within 10 feet of the entrance to a polling place. Police officers and armed troops must stay at least 100 feet away from the entrance unless voting, serving warrants, or being called upon to preserve the peace."

The task force will remain active until election results are certified, which is normally about three weeks.

Members of the public are encouraged to report possible criminal attempts to interfere with or influence voting by calling the Election Task Force hotline at (215) 686-9641 , as well as the national nonpartisan Election Protection hotline at (866) OUR-VOTE.