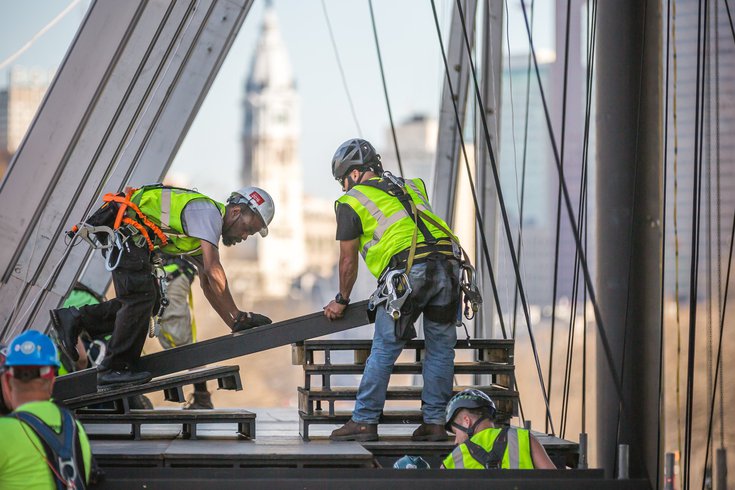 A new online resource contains dozens of apprenticeship opportunities available in Philadelphia, including many in the construction sector. The book was compiled by Councilmember Katherine Gilmore Richardson.

Young Philadelphians looking for a path to a stable, lucrative career can utilize an online resource that features dozens of apprenticeship opportunities in the city.

The 40-page online book, which includes directions on how to apply to 26 different apprenticeship programs, was compiled by Philadelphia Councilmember Katherine Gilmore Richardson with support from local unions.

An apprenticeship is an arrangement where paid part-time on-the-job training is combined with classroom instruction to prepare an inexperienced worker for a career in the skilled trades, according to the U.S. Department of Labor. Of those who completed a program since 2017, 94% were able to find employment within six months of graduating and over 90% were making more than $70,000 per year.

Construction trades like ironworking, cement masonry and roofing are well-represented in the book.

She said many Philadelphians who could stand to benefit from these programs simply aren't aware that they exist.

"With better access to this information, a more diverse range of Philadelphians can learn about … unions and skilled trades," Richardson said, which she described as "the backbones of the middle class."

Many researchers have identified a close relationship between union membership and middle class wages, including the Center for American Progress.

One reason union membership may have waned in the U.S. is because apprenticeships are far less common today than they were in previous centuries.

The practice extends all the way back to before the colonial era, when it was common among craftspeople. Blacksmiths, tanners and carpenters would often send their sons to work with a fellow tradesman. In exchange for the free labor, apprentices would be provided with food, a place to stay and valuable learning experience.

In the early twentieth century, the arrival of labor-saving machines eliminated much of the grunt work apprentices were typically contracted for, signaling the practice's eventual decline according to an analysis from the Brookings Institute.

Although the federal government worked to bolster hands-on industrial learning through the advent of vocational high schools and other workforce development programs, these efforts ultimately had a limited reach.

This was in part because in the U.S. many upwardly mobile working class parents in search of additional money and status preferred the idea of sending their kids to college instead of an apprenticeship program.

Additionally, America's robust system of higher education – which first only existed to prepare elite young people for leadership positions – began creating degree programs focused on high-paying jobs, many of which existed on a "graduate" track. Colleges then successfully lobbied the government to require professionals in fields like medicine, law and more to get one of these degrees to practice legally.

But they had no interest in creating apprenticeship programs, which were relegated to only working-class professions.

In some other countries, this class division is not as prevalent when it comes to workforce education. For example, in Switzerland two-thirds of university students work and learn at the same time, meaning they graduate with much lower student debt loads.

Apprenticeship programs continued to suffer into the late twentieth century when the deindustrialization of the American economy put even more of an emphasis on higher education according to an op-ed from the Niskanen Center.

But apprenticeships have become much more common in recent years. The number of those participating in apprenticeship programs nationwide has grown by 64% since 2010.

There were over 18,000 active apprentices in Pennsylvania and over 8,500 in New Jersey in 2020. Richardson's book is far from the only place Philly area residents looking to join their ranks can look for an apprenticeship opportunity online.

On DOLI's website, prospective applicants can look for apprenticeships and employers can post opportunities. On the site, there were 86 apprenticeship opportunities listed in Philly, 45 in Bucks County, 47 in Montgomery County, 38 in Delaware County and 32 in Chester County.

On the other side of the Delaware River, the New Jersey Apprenticeship Network is run through the state's Department of Labor and Workforce Development. Both applicants looking for an apprenticeship and employers looking for apprentices can register with the network on DOLWD's website.