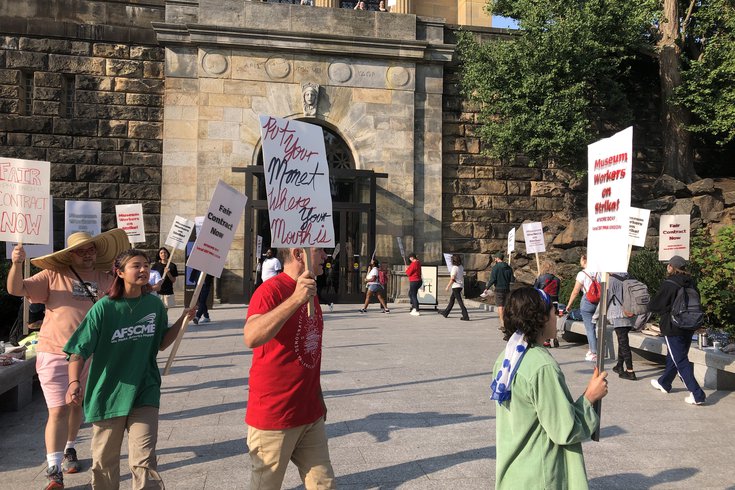 Unionized workers at the Philadelphia Museum of Art began a one-day strike Friday morning amid contract negotiations. The workers allege museum management has engaged in union-busting tactics and failed to bring an offer that addresses their economic priorities.

Union members say museum executives have yet to remedy the alleged unfair labor practices or come to the bargaining table with an offer that addresses their demands. The union, which formed in August 2020, has been in contract negotiations with the museum since October of that year.

"Museum management needs to stop union-busting and make serious offers that improve workers' wages, health care and parental leave," said Cathy Scott, president of AFSCME District Council 47. "Our membership would not have authorized a strike if they were not united in these demands. We cannot accept a status quo that subjects workers to violations of federal law, wages well below the national average for art museum, and benefits that do not allow workers to support their families."

Local 397 represents workers in most museum departments, including a visitor services, retail, education, installations, curatorial, conservation, marketing and development. Pickets have been set up near the museum's main entrance, the Perelman Annex and the Rodin Museum.

The decision to strike came after a week of posts on the union's social media accounts, in which workers described why they were "ready to strike." In the posts, workers noted that museum management has been unwilling to respect the union and accused its leadership of "peddling misinformation" about the union in internal emails to its staff.

The one-day work stoppage is meant to serve as a warning to museum leadership that Local 397 is willing to make good on its promise to strike amid ongoing negotiations. The union is authorized to call for further action — including more work stoppages — if its executive board deems it necessary.

"We take this very seriously," said Adam Rizzo, museum educator and president of Local 397. "If museum management does not remedy the unfair labor practice charges and come to the bargaining table ready to make real progress, we are prepared to take further action. We have made it very clear what PMA Board Chair Leslie Miller and COO Bill Petersen can do to avoid the disruption of museum operations."

Rizzo said much of the negotiations have focused on economic issues like paid parental leave, health care benefits, job security and salary increases.

"The museum remains open to the public and is committed to serving our community," a spokesperson from the Philadelphia Museum of Art told PhillyVoice. "When eligible staff voted to unionize, we immediately and unequivocally pledged to negotiate in good faith and we have done so. The museum has devoted significant time and energy to the negotiations, and we have made considerable progress, reaching agreement on more than 25 substantive issues. We are disappointed that the union has chosen to strike, but we remain focused on reaching a fair and appropriate contract with the union."

Workers are bargaining for guaranteed pay increases. Some say that raises have been infrequent. Sarah Roche, who has worked as a label technician at the museum since 1997, previously told Hyperallergic that she has not had "a meaningful raise in in a long time, not since the Bush administration."

When the union authorized its strike in August, Rizzo said it was unacceptable for the museum to offer "meager raises" after workers went years without raises and amid the COVID-19 pandemic, which caused the museum to eliminate 23% of its staff in early 2020.

The museum is slowly beginning to restaff its museum as travel has resumed and residents have attempted to return to normalcy. Still, the union alleged in its charges with the NLRB that management has sought to replace full-time employees with temporary workers, thus reducing the size of the union's bargaining unit.