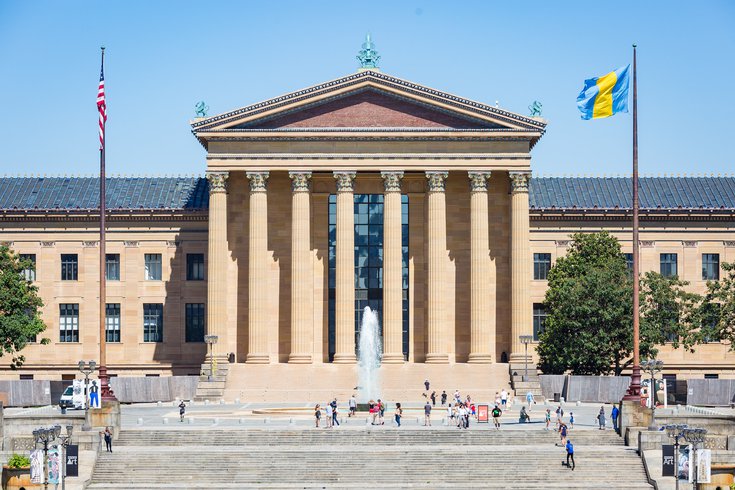 Union workers at the Philadelphia Museum of Art voted to authorize a strike Tuesday night. The union, which is negotiating its first contract with museum leadership, is asking for pay increases and better benefits.

Unionized workers at the Philadelphia Museum of Art voted overwhelmingly Tuesday night to authorize a strike, urging the institution's leadership to meet their demands for better pay and benefits to avert a possible work stoppage.

In the largest meeting in the union's two-year history, 99% of workers voted to authorize a strike. The union has been collecting donations to its strike fund from supporters, labor organizers and museum members at rallies held throughout the city.

A vote to authorize a strike does not guarantee that PMA workers will walk off the job. Rather, it gives union leadership the ability to call for a work stoppage if ongoing contract negotiations do not advance to their liking.

"After massive layoffs, years without raises and an ongoing pandemic, museum management expects us to accept meager raises, insufficient paid parental leave and no improvement to our health care benefits whatsoever. We won't," Adam Rizzo, museum educator and AFSCME Local 397 president said. "PMA Board Chair Leslie Ann Miller and COO Bill Petersen have the power to avert a strike; start respecting this union, stop acting unilaterally in violation of federal labor law, and come to the table with real responses and a real commitment to reaching a fair resolution."

The union has been at the bargaining table trying to hammer out its first contract for 22 months. Rizzo said much of the negotiations have focused on economic issues like paid parental leave, health care benefits, job security and salary increases.

The union formed in August 2020, with 89% of PMA workers voting to unionize, following a broader movement toward salary transparency among workers in the museum industry.

At tonight's member meeting, the largest in our union's history, 99% voted to authorize a strike at the Philadelphia Museum of Art @philamuseum over museum management's Unfair Labor Practices and unreasonable bargaining positions. Management can avert a strike by... pic.twitter.com/aZ9wQC33Vx

"The museum was disappointed to learn of the union's vote to authorize a strike," a spokesperson for the Philadelphia Museum of Art told PhillyVoice. "We value our staff and have always respected their right to organize and participate in the union. Accordingly, our museum has been bargaining in good faith with the union, and we remain committed to working toward a fair and appropriate collective bargaining agreement.

"To date, we have reached tentative agreements with the union on more than 25 substantive issues. We are scheduled to meet again with the union next week and hope to continue making progress in the negotiations."

The Art Museum eliminated 23% of its staff in the early days of the pandemic, but it began re-staffing as travel resumed and residents sought to regain a sense of normalcy.

The union also is bargaining for guaranteed pay increases. Workers have said raises have been infrequent. Sarah Roche, who has worked as a label technician at the museum since 1997, told Hyperallergic that she has not had a "meaningful raise in a long time, not since the Bush administration."

"During negotiations, we have presented research showing how low pay is at the Philadelphia Museum of Art compared to other art museums nationally, and especially compared to our peer institutions," said Matt Carreiri, museum gallery maintenance technician and Local 397 executive board member at-large. "Museum management has not argued that they cannot afford the improvements we are proposing; they have simply rejected them. When good faith negotiation on our part is met with unfair labor practices and rejection again and again, we have no choice but to prepare to take the action away from the bargaining table."

The union also alleged that management sought to replace full-time employees with temporary employees, thus reducing the size of the union's bargaining unit, and misrepresented contract negotiations in internal emails.

A museum spokesperson told PhillyVoice that management does not agree with the union's assertions in the labor practice filings, and that they look forward to responding.

It may take months before the NLRB is able to investigate the charges.