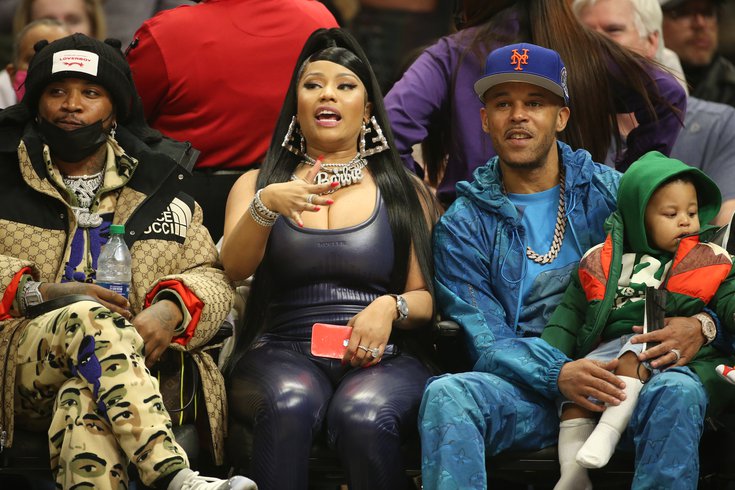 Nicki Minaj, the chart-topping musician the Philadelphia Department of Public Health's Twitter called out for her vaccine skepticism this week, at a basketball game with her husband and son.

Rapper and pop star Nicki Minaj's track "Do We Have a Problem?" featuring Lil Baby is currently No. 2 on Billboard's Hot 100 chart.

Apparently, the people behind the Philadelphia Department of Public Health's Twitter account do have a problem with what some see as Minaj's past promotion of vaccine misinformation. So, they decided to call her out over it on the social media platform.

Youth-centric humor being featured on corporate Twitter accounts isn't a new phenomenon, but DPH has been getting in on the trend in recent months with memes, GIFS and other non-serious content, mostly about the pandemic and related mitigation efforts.

This week they took it to another level by directly calling out Minaj for a viral tweet of hers from last year expressing skepticism about the COVID-19 vaccines.

"Nothing like watching someone speak confidently about something they know nothing about," Minaj tweeted to her nearly 24 million followers in the early hours of Saturday morning.

Nothing like watching someone speak confidently about something they know nothing about.


It's not clear what exactly she was referencing, but in the minds of many public health officials and those behind DPH's Twitter – which has just over 33,000 followers – Minaj has in the past been guilty of confidently making false statements about a topic she's not an expert on.

The department's response to the singer began with the eyeballs emoji and ended with a screenshot of a tweet of hers which is part of a thread from September 2021.


"My cousin in Trinidad won't get the vaccine cuz his friend got it and became impotent. His testicles became swollen," Minaj said. "His friend was weeks away from getting married, now the girl called off the wedding. So just pray on it and make sure you're comfortable with your decision (about getting vaccinated), not bullied."

The post quickly went viral and has since been retweeted nearly 25,000 times. Minaj faced swift backlash from doctors, public officials and liberal Twitter at large.

Many noted that swollen testicles aren't a known side effect of the COVID-19 vaccines. Even the White House offered to connect Minaj with an expert on the pandemic to allay her concerns.

The White House has invited me & I think it’s a step in the right direction. Yes, I’m going. I’ll be dressed in all pink like Legally Blonde so they know I mean business. I’ll ask questions on behalf of the ppl who have been made fun of for simply being human. #BallGate day 3 https://t.co/PSa3WcEjH3


The condition Minaj's cousin's friend was suffering from was “almost certainly” not related to the vaccine, Arturo Casadevall, chair of molecular microbiology and immunology at the Johns Hopkins Bloomberg School of Public Health, told CNBC.

“We are all human, and we tend to associate things," he said. "Oftentimes, things that are not related get associated, and to that person, that association is very strong."

Most of the commenters on Twitter panned DPH for the response.

"Ugh they let the intern post something again," one user said.

"This is so ghetto and unprofessional," another tweeted. "But then again it’s Philadelphia, (so) what do you expect."

"Why is this being retweeted after all this time? Got nothing better to do with our tax money?" one commenter asked.

"It’s all love!" DPH commented in response to the haters.

Public health officials have long stressed the importance of encouraging the unvaccinated to get jabbed by debunking misinformation, which is what many view Minaj's tweet as, but it's not clear if calling them out online like DPH did is an effective way to change their minds.

Some other vaccine advocates are taking a less judgmental approach.

Raven Baxter, a doctor on Twitter known as "Raven the Science Maven" who was featured in Forbes' 30 under 30 last year, included her rap song about the vaccine in a comment on Minaj's tweet.

"Nicki, I made this rap about the vaccine last fall! It talks about the immune system and some of the things that happen with your immune system after you get a vaccine," she said in her response laden with heart emojis. "Happy to talk more about it with you. My space is always judgment free!"

Although Minaj was certainly skeptical of vaccines, it couldn't be said that she wasn't taking the pandemic seriously. At the time of her tweet, she hadn't made a public appearance in over a year and she skipped last year's ritzy Met Gala in her native New York City – which had a vaccine requirement – because she had an infant son at home she wanted to keep safe.

She's also far from alone when it comes to vaccine hesitancy. At the end of last year, the Center for Disease Control reported that 15% of American adults still weren't vaccinated. Of the unvaccinated people surveyed, 42% said they simply don't trust the vaccines.

Those stats are often even higher in many Black and Hispanic communities, which historically have a deep-seated skepticism of the American health care system that far predates the pandemic.

In Pennsylvania, just over 60% of white people are fully vaccinated, but only 41% and 51% of the state's Black and Hispanic residents are, respectively.