The hand-crafted tankard, made of silver and bejeweled with brightly-colored enamel pieces, belonged to the prominent Biddle Family 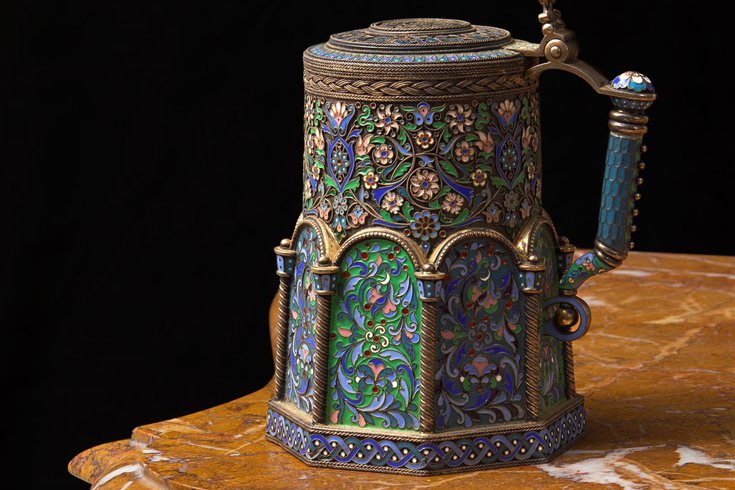 This hand-crafted mug was a gift to Philadelphia's Alexander Biddle from Russian Czar Alexander III in honor of the philanthropic aid he provided during the famine of 1891 and 1892. It is being auctioned off by Freeman's on Feb. 24.

Relations between the United States and Russia often have been tense over the last century – as they are right now. But an artifact being auctioned off in Philadelphia later this month is evidence that the relationship once was much warmer.

On Thursday, Feb. 24, Freeman's will auction off an ornate drinking vessel crafted in 1892. It's made of silver and adorned with hundreds of brightly-colored, enamel cells organized into intricate designs, many of them floral.

The cup came from the workshop of Pavel Ochinnikov – a silversmith, goldsmith and jeweler who was one of the most well-respected Russian craftsmen of his era. He was often contracted by Czar Alexander III to make gifts.

Although the cup was smithed in Russia, it has spent most of its existence in Philadelphia in the collection of the city's once prominent Biddle family, which traces its Philly roots to 1730 and its link to South Jersey even further.

The tankard was gifted to Alexander Biddle in 1893 by Alexander III as a token of appreciation for the philanthropic aid he and other prominent Philadelphians sent to Russia during the famine of 1891 and 1892. Historians estimate the event, triggered by a drought, killed as many as 400,000 people.

"Philanthropy was an important part of demonstrating wealth in the Gilded Age," said Laura Sevelis, the Freeman's representative running next week's auction, which is focused on that period.

In the U.S., the era was defined by a small number of families and businesspeople who consolidated enormous amounts of political power and wealth, much of which was used to buy handcrafted art and furniture.

Biddle helped create the Russian Famine Relief Committee of Philadelphia in January 1892, which sent a ship full of provisions from the Washington Avenue Pier to the port of Libau in modern-day Latvia that March, per a blog post from Freeman's.

Biddle and other members of the committee traveled to Russia ahead of the ship to tour areas impacted by the famine and to see the nation accept their aid firsthand.

After the committee members returned to Philly, they were visited by a Russian delegation in May 1893 to mark the 10th anniversary of Alexander III's coronation.

Two Russian ships docked in the Delaware River and gifts, including the tankard, were presented to nine members of the relief committee. Russian diplomat ​​Mikhail Cantacuzene also published a letter in the Inquirer thanking the committee.

Despite the imperial government's success soliciting foreign aid, it "bungled" its own response to the famine and was subjected to much domestic criticism, said Peter Holquist, a professor of Russian history at the University of Pennsylvania.

Starting in the 1880s, the Russian government made modernizing the nation's economy a top priority, he said. Capital for new industrial projects was mainly obtained by exporting grain.

Despite the famine, the government continued shipping off the commodity, which came at the expense of reserves that could have been used to feed starving peasants.

Holquist added that the famine came amid a period when the czar and his allies were busy crushing a wave of Russian populism, which culminated in the Russian Revolution and the formation of the Soviet Union a few decades later.

With many populists holding positions in the Russian government at the time, Alexander III worried that creating a robust government response to the famine would give his political competition the resources needed to overthrow his regime.

This is why the Russian nobility instead opted to solicit philanthropic aid from wealthy foreigners, Holquist said. To many Americans at the time, Russia was a distant and benign foreign power with little relevance to American foreign policy objectives.

"Russia's relationship with the United States is relatively new and conducted at distance," Holquist said. "There was a sense that there were friendly relations between the two, but relations that were not of any terribly great import."

At this time, the U.S. was mostly focused on protecting its sphere of influence in the western hemisphere from Western European imperial powers.

The U.S. bought Alaska from Russia in 1867 and by the 1890s many Jewish immigrants from the Russian Empire were fleeing to the U.S. to escape its deeply anti-semitic policies, Holquist said.

Still, Russia didn't become a central driver of American foreign policy until the U.S. became heavily involved with European affairs, first during World War I – which Russia dropped out of in 1917 due to the Russian Revolution and the formation of the Soviet Union – and again in the aftermath of World War II.

In addition to the tankard, more pieces from the collections of some of America's wealthiest families will be auctioned off. The "Gilded Age" auction will happen virtually Feb. 24 at 10 a.m. Participants can bid in real time through Freeman's website or over the phone.

Those interested in viewing the tankard and other items in person can set up an appointment to visit Freeman's at 2400 Market St. between Friday and Wednesday by contacting Sevelis at lsevelis@freemansauction.com.