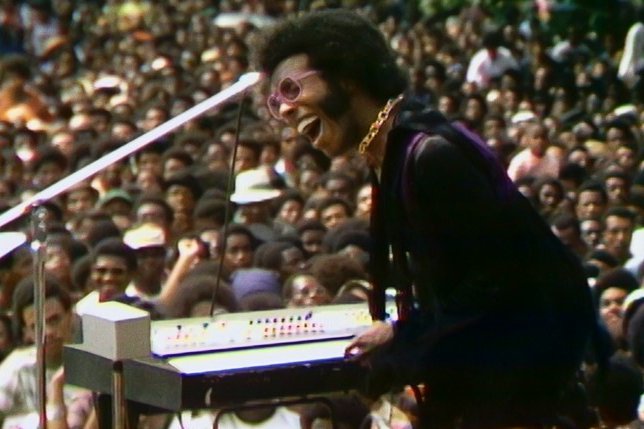 'Summer of Soul' will make its broadcast television premiere this Sunday at 8 p.m. on ABC.

"Summer of Soul," Questlove's award-winning documentary on the 1969 Harlem Cultural Festival, will premiere on broadcast television this weekend.

ABC will broadcast the movie at 8 p.m. Sunday. It already is available for streaming on Hulu and Disney+. The 17-song soundtrack also is available.

"Summer of Soul" highlights the Harlem Cultural Festival's musical, historical and societal impact through archived footage and interviews with performers and attendees.

Sometimes referred to as "Black Woodstock," the festival took place during the same "Summer of Love" as the celebrated Woodstock Music and Art Fair in upstate New York. The Harlem Cultural Festival featured more than 30 performances from music legends like Stevie Wonder, Nina Simone, Sly and the Family Stone, B.B. King and Gladys Knight and The Pips, from late June through August 1969.

About 300,000 people attended the festival, but its place in history had been obscured by a lack of exposure in subsequent decades.

One of the event's producers filmed more than 40 hours of footage from the summer series. Most of it never saw the light of day due to a lack of interest. It sat in boxes inside the producer's basement for 50 years – until The Roots drummer was tapped to direct the film.

Questlove, whose name is Ahmir Thompson, said his original goal was to select a number of great songs from the acts that performed at the festival. But the COVID-19 pandemic and civil unrest across the country in 2020 changed how he and his team approached the project.

"We saw [the film] as a chance to contextualize for people like Gen Z and millennials, who aren't familiar with those acts, but why they all got together and used their voice for activism," Questlove told Jimmy Fallon on "The Tonight Show" last year. "We really went deep into the narrative of just why it's important and so that's why I feel like it covers everything. Even if you're just there for the music or you see the message of why this concert had to be thrown, it covers all the generations."

"Summer of Soul" has received widespread critical acclaim since it debuted at the 2021 Sundance Film Festival. The documentary won the Grand Jury and Audience prizes in the nonfiction category at the festival. The Sundance Institute awarded Questlove the 2021 Vanguard Award for his directorial work.

The film swept the Critics Choice Documentary Awards in November, winning all six honors it was nominated for, including best documentary and best director. "Summer of Soul" also won best documentary at the AAFCA Awards, and former President Barack Obama named the film one of his favorites in 2021.

Questlove earned the first Oscar nomination of his career last week when "Summer of Soul'' was nominated for best feature documentary at this year's Academy Awards. The documentary is also up for best music film at the 2022 Grammy Awards, and also have received a pair of NAACP Image Award nominations and a BAFTA nomination.