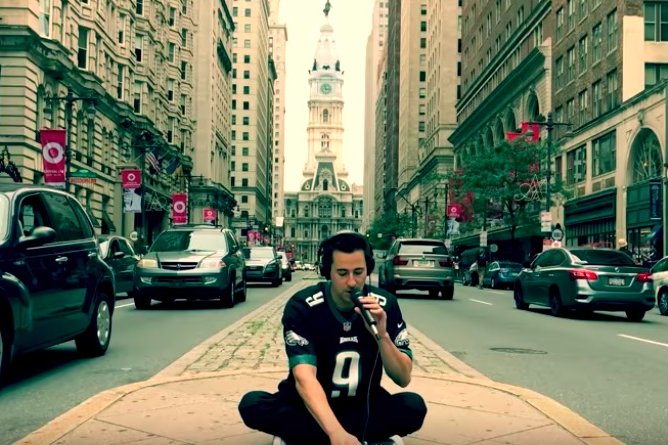 In the countdown to Thursday's Philadelphia Eagles season opener, fans are showing love for the Super Bowl Champions in the best way the internet knows: posting videos on YouTube.

Wilmington, Delaware, hip hop artist Boy Pierce penned a tribute to Nick Foles and published it Monday, garnering more than 5,000 views in the past three days. The video shows footage from the 2017-18 season mingled with shots of Boy Pierce sitting at different recognizable Philly locations – Broad Street, the Linc, and the eagle-attacking-Tom-Brady mural all make an appearance.

Boy Pierce details Foles' football career leading him to Super Bowl LII before repeating a chorus evocative of the "Ghostbusters" theme – "Who you call when they count you out with little hope? ... Nick Foles."

Boy Pierce's tribute isn't the only Eagles theme making the rounds online this week. Reading, Pennsylvania band Go Go Gadjet made a hyped remix using the Eagles fight song and "No One Like Us," made infamous in Jason Kelce's victory parade speech.

Check out the video below, as the band has what appears to be a lovely day sightseeing in Philly – Love Park, City Hall, and Geno's are in there. It's guaranteed to get you excited for the new season in less than two minutes.