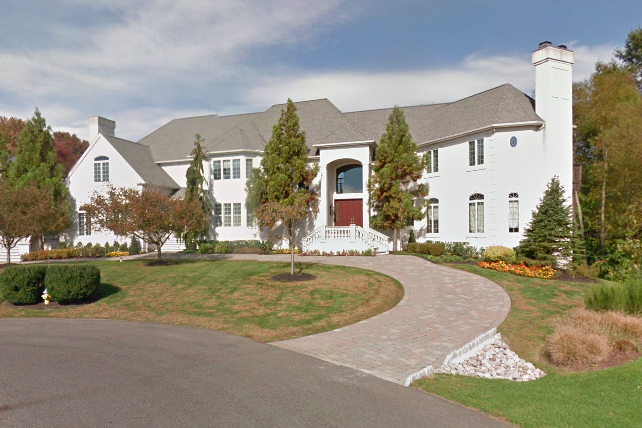 Terrell Owens lived at this property in Moorestown, New Jersey, while he was on the Philadelphia Eagles. In 2005, amid a training camp contract dispute, he and agent Drew Rosenhaus held an impromptu press conference where Owens staged a workout in the home's driveway for television cameras.

Hall of Fame wide receiver Terrell Owens burned brightly at both ends of his brief time as a member of the Philadelphia Eagles.

It almost goes without saying that the most stunning moment of his fallout with the Eagles came during training camp in 2005, when Owens was sent home in the midst of a bitter contract dispute. Reporters camped out at his property in Moorestown, New Jersey, where he proceeded to pump iron and do sit-ups while answering interview questions.

That moment marked the beginning of the end for Owens in an Eagles uniform.

The house, located at 40 Landing Court, was a disastrous investment for Owens. After purchasing the property for $3.9 million in 2004, Owens listed it for $3.4 million in 2007. Its value plummeted by half before he finally sold it for $1.7 million in 2010.

Now the house is back on the market for $2.2 million, according to a listing on real estate website Zillow.

Situated on two lots covering 5.7 acres, the property has four bedrooms, nine bathrooms (each with a Jacuzzi), a custom designed kitchen and a conservatory, an indoor cabana and a large outdoor pool.

Owens has long since moved on from Moorestown, but it wasn't until last year that he finally told his own version of what went on that fateful day. The animated tale on the "Simms & Lefkoe" show gives Owens' side of the story, for posterity.