The Thanksgiving Parade, tree lighting celebration and New Year's fireworks are all back 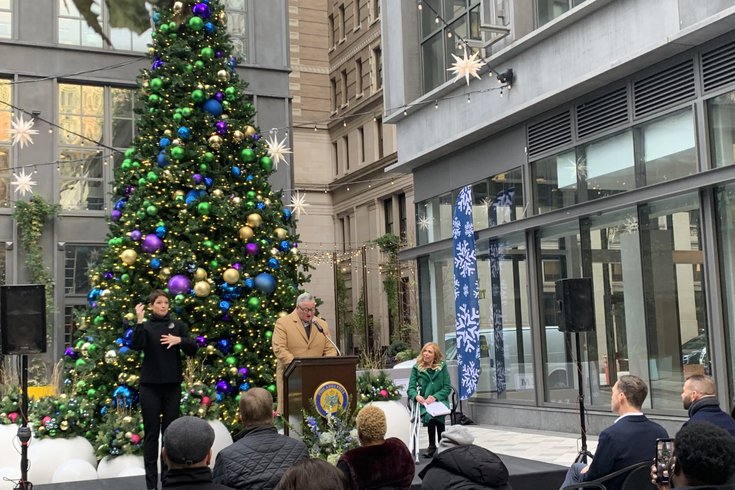 Mayor Jim Kenney announces that Philadelphia is bringing back its holiday festivities in 2021 after a year of modified or canceled events caused by the COVID-19 pandemic.

Most of Philadelphia's holiday festivities were modified or cancelled last year because of the COVID-19 pandemic – but they are making a comeback this season.

City officials encouraged people to enjoy the traditional line up of events and announced some new, exciting celebrations during a press conference Thursday.

The city will host a first-of-its-kind holiday parade on Saturday, Dec. 4. It's a celebration that Mayor Jim Kenney said he has been working on making a reality for years.

The Thanksgiving Parade also will be returning after it went virtual last year due to the pandemic.

"We can all ... appreciate each other and be happy that we are all still alive, because we lost a lot of people," Kenney said, referencing the nearly 4,000 deaths caused by COVID-19. "We want to make sure we take the time to thank every nurse, every doctor, every hospital worker, every first responder that went into the fire every single day and took care of us."

This year's line up will have a focus on diversity and celebrate all winter holidays, Kenney said.

Neighborhood-based organizations, arts and culture groups, and more will be a visible presence throughout the holiday season.

Here's a look at each of the events:

The 102-year-old tradition – the oldest Thanksgiving parade in the United States – will follow its usual route through the city, up the Benjamin Franklin Parkway to the steps of the Philadelphia Museum of Art and will feature live performances, marching bands, floats, balloons and Santa and Mrs. Claus.

For the first time, the Thanksgiving parade will be streamed live on Hulu allowing people across the country to watch.

A 45-foot Christmas tree will be making its way to the north side of Philadelphia City Hall all the way from Steuben County, New York, for the Philly's annual tree lighting celebration at 7 p.m., Thursday, Dec. 2.

There also will be a ferris wheel, a kids train and tons of holiday shopping set up at Dilworth Park. Disney's a cappella group, DCappella, will perform.

The ceremony will be streamed live on 6ABC for a full hour, a half-hour longer special than the station hosted last year.

The city is hosting a new holiday parade that will head up Market Street this season at 5 p.m. on Saturday. Dec. 4. Officials said the event will highlight the diversity holidays celebrated throughout Philadelphia during the season, including Hanukkah, Kwanzaa, Christmas and Chinese New Year.

"I know this is Christmas, but it's really more than Christmas, it's become such a national holiday for everyone," Kenney said. "This city is so diverse and so multicultural, and full of so many religions."

The parade starts at Second and Market streets and heads west to City Hall. There will be floats with lights, balloons and marching bands.

Arts and culture groups and neighborhood-based, cultural organizations also will participate in the new parade, marching with holiday banners, balloons and other parade props.

While Philadelphia is known to have two New Year's Eve firework displays, this year they are "upping the ante," and adding a second fireworks show on New Year's Day, Jan. 1.

The show will kick off at 6 p.m. at the Great Plaza at Penn's Landing, and more details are to come.