By Michael Tanenbaum
PhillyVoice Staff
Politics State Of The Union
from 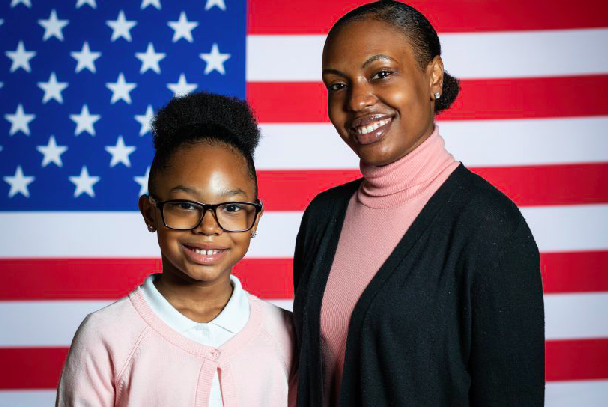 Stephanie and Janiyah Davis, a mother and daughter from Philadelphia, will attend the State of the Union Address in Washington, D.C. The Trump administration invited them over the issue of school choice funding programs in Pennsylvania.

A Philadelphia mother and her fourth-grade daughter were recognized Tuesday night at President Donald Trump's State of the Union.

Stephanie and Janiyah Davis were invited to Washington, D.C., to highlight the Trump administration's stance on school choice, a contentious issue in Pennsylvania's strapped education system.

Here's how the White House described the purpose of the family's invitation:

Janiyah is a 4th grade student from Philadelphia, Pennsylvania. She loves art and math, but for too long she has been assigned to low-performing schools. Her mom, Stephanie, is a hardworking single mother who tried to apply for a tax credit scholarship. But due to Pennsylvania’s governor recently vetoing school choice legislation, Janiyah remained among the estimated 50,000 students on a waitlist.

During the State of the Union address, President Trump announced that a scholarship had been secured to send Janiyah to the school of her choice. Details about where she plans to continue her education were not revealed.

Gov. Tom Wolf last year vetoed an expansion of the state's Educational Improvement Tax Credit, which provides credits to businesses and individual donors who make gifts to scholarships for private, parochial and other schools.

Republican State House Speaker Mike Turzai, the state's leading advocate for the tax credit expansion, had proposed an increase of the program's funding from $110 million to $210 million, with subsequent increases based on annual demand. His legislation also raised the per-household income limit for the program to $95,000, a sticking point the Wolf administration saw as beyond its mission.

"Why would the Commonwealth allow for the expansion of the Education Investment Tax Credit that supports private institutions while our current public-school system remains underfunded?" Wolf said at the time. "We have public schools that are structurally deteriorating, contaminated by lead, and staffed by teachers who are not appropriately paid and overstretched in their responsibilities. Tackling these challenges, and others, should be our collective priority."

Wolf has been working on larger reforms to the state's charter school laws to better address local funding disputes and ease the administrative burden on the state Department of Education, which has focused on funding and improving the public school and special education system.

In the budget approved last June, Wolf ultimately agreed to a $25 million increase in the Education Investment Tax Credit. His revenue department had projected that Turzai's original proposal would take about $650 million out of the General Fund over the next five years, according to PennLive.

Turzai, who plans to retire at the end of his term, argued last June that the EITC expansion would not have a negative impact on public schools.

"The notion that we are neglecting our public schools is disingenuous," Turzai said. "Rather, we have increased investments in public education K-12 to record levels. What we have neglected to provide is adequate support for those families who are looking for an alternative choice. We are unique in this country in living up to our obligation to provide a great public school system, as well as a robust school choice program. These are complementary, not contradictory, goals."

In addition to Trump's invitation to Stephanie and Janiyah Davis to attend the State of the Union, Vice President Mike Pence will be at St. Francis De Sales School in West Philadelphia on Wednesday to speak about school choice.