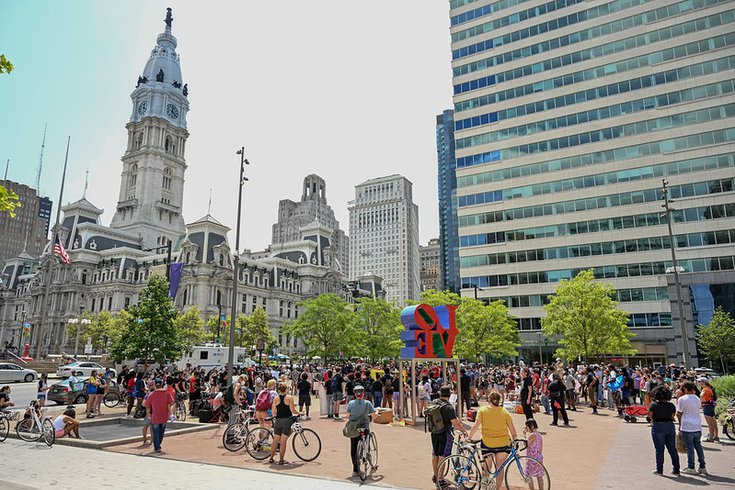 Hundreds of protestors gathered in Center City on Saturday calling for the removal of police officers in Philly schools, as well as for an online-only fall semester due to COVID-19.

Students, parents, teachers, community members, and local advocacy organizations rallied on Saturday afternoon in Center City, calling for both Philadelphia police officers to be removed from schools and a continuation of online learning this fall due to the COVID-19 pandemic.

The event, called “Philly Peace Not Police: A Rally and March for Police Free Schools,” was organized by the Philadelphia Student Union. Hundreds of demonstrators, carrying signs and chanting, gathered at LOVE Park before marching to Philadelphia Family Court and the School District of Philadelphia’s headquarters on North Broad Street.

Other community organizations that participated in the demonstration were the Racial Justice Organizing Committee and Black Lives Matter Philly.


Crowd and police presence has swelled at Philly Student Union protest for police free schools, which moved up Broad Street, back to #phled HQ. pic.twitter.com/cxLmEPhGnF


More than 150 people are at LOVE Park at a #phillyprotest led by the Philadelphia Student Union.

This protest is being led by children.

They are telling stories about being attacked by Police & talking about the police presence in City schools. pic.twitter.com/8FxaSRZcdz


Protestors have arrived at The School District of Philadelphia building & are chanting for police free schools.

The School District of Philadelphia had already said that it would rebrand cops as “safety officers” who would be focused on mentoring students.

However, the Philadelphia Student Union has said that the proposed reform effort doesn’t go far enough. The group also has argued that the $31 million the district spends on school security would be better allocated to ensuring schools have enough librarians, counselors, nurses and teachers.

The protesters issued 10 demands for "radical education transformation," including the development of protections for students and teachers who experience racism, eliminating school police, increased funding for school counselors and social workers, and mandating anti-racist training for all teachers.

School officers carry handcuffs, but not firearms. They staff the metal detectors stationed at the city's high schools, among other responsibilities.

The Racial Justice Organizing Committee put together a similar petition calling for all-remote instruction in Philly schools this fall due to the ongoing public health crisis.

The School District of Philadelphia is seeking to implement a staggered, hybrid education model of both online and in-person learning for the upcoming school year.

Protests calling out racism and police brutality have taken place regularly across Philadelphia in the wake of George Floyd’s death. Floyd, a Black man, was killed on May 25 by Minneapolis police officer Derek Chauvin.