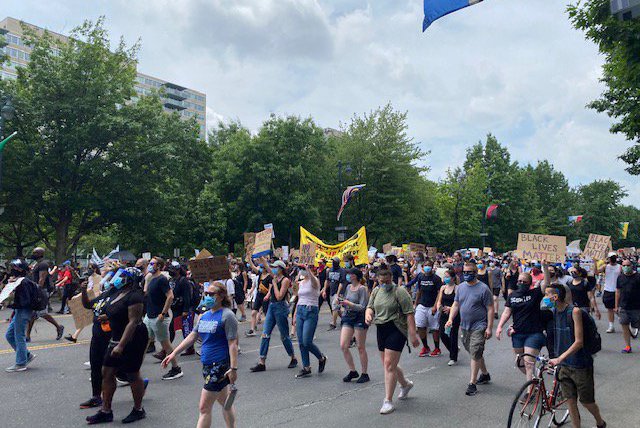 A letter from U.S. Attorney William McSwain to Philadelphia's city solicitor claims the moratorium on large public events is unconstitutional. The city adopted the policy, which extends through next February, as a means of preventing the spread of COVID-19. The ban does not apply to protests.

McSwain, who was nominated for his position in the Eastern District of Pennsylvania by President Donald Trump in 2017, addressed the issue in a letter to City Solicitor Marcel Pratt.

While commending the city's efforts to balance peaceful public protest with the importance of containing the spread of COVID-19, McSwain questioned whether the protection of protests in the city is selective in light of the moratorium:

"The city's announced policy is, in my view, plainly unconstitutional. It would prohibit a whole myriad of public gatherings (such as Labor Day gatherings, 9/11 memorials, the Puerto Rican Day parade in September, Veterans Day gatherings, the Thanksgiving day parade, the New Years Day parade, or religious-themed festivals and gatherings), but would allow public gatherings on issues that spark a so-called 'spontaneously planned event' that is 'in response to a recent occurrence.' The subtext, of course, is clear: the City has seen a surge of protests inspired by the killing of George Floyd and does not want to be perceived as prohibiting those gatherings, regardless of any possible public health consequence, but has decided to prohibit other forms of protected speech."

McSwain added that the policy creates an "unconstitutional hierarchy" enabling the city to "pick and choose" which forms of public speech are protected. Though he does not object to the city's view of the public health risks of protests, McSwain said the same protections should be extended to other outdoor events, including those that require a permit.

The letter comes against the backdrop of President Trump's threat to send federal law enforcement into Philadelphia and other cities governed by Democrats. The presence of federal agents and militarized anti-riot troops in Portland, Oregon, has prompted widespread concern about similar scenes unfolding elsewhere under the banner of the Justice Department's Operation Legend initiative.

In Chicago, Mayor Lori Lightfoot initially resisted Trump's plans to send in federal officers, but relented when the reinforcements were presented as a cooperative crime-fighting effort with city police. Agents also will be sent to Albuquerque, New Mexico.

Protests in Philadelphia largely have subsided in recent weeks, but the city remains in the midst of one of the most violent and deadly crime streaks of the past decade.

A spokesperson for the Mayor's Office said the city will respond to McSwain's letter, but issued a statement with some concern that the challenge could be an attempt to undermine peaceful protests.

The City values and respects the First Amendment and the resulting rights and protections to our residents. The City is continuing to balance these rights and the significant health risks posed by the pandemic. We are trying to save lives, and we are confident that this approach protects the residents of this City from a surge in COVID-19 while safeguarding the Constitutional right to free speech.

The U.S. Attorney seems to be accusing the Mayor of using "subtext” to allow peaceful protests against racial injustice, while not allowing other activities, in violation of the First Amendment. We will provide a full response to the U.S. Attorney’s letter within the next couple of days. However, we sincerely hope that his letter is not an attempt by the Trump Administration to discourage peaceful protests in Philadelphia.

To protect privacy, Philadelphia did not record statistics about protest attendance when administering COVID-19 tests. But Health Commissioner Dr. Thomas Farley has said there did not appear to be a noticeable spike in coronavirus infections related to protests in the weeks that followed the peak of civil unrest.

Earlier this week, Farley hinted that the city will likely see a cycle of increasing and receding COVID-19 restrictions based on the evolving status of the coronavirus, at least until a vaccine is widely available.

While the moratorium applies to public events requiring permits from the Office of Special Events, the city's stance on private events has been complicated in some instances, such as the Eagles' wish to have socially distanced fans attend games at Lincoln Financial Field in September.

Philadelphia recently has seen modest increases in COVID-19 cases while remaining in a modified green phase of Pennsylvania's reopening process.

The city initially delayed any decision on another status change until Aug. 1, but Farley said Thursday he doubts there will be any significant changes around that time due to the current trajectory of rising cases.

He specifically addressed the issue of indoor dining, noting that the city has had its hands full with safely permitting outdoor dining. Since restaurants were allowed to resume outdoor service, the city has completed more than 4,000 proactive inspections and 621 inspections in response to complaints. Seven restaurants have been shut down, 89 have received warnings and 19 have been cited for violations.

"We continue to believe that indoor dining is unsafe right now," Farley said. "But restaurant dining can be done safely outdoors, provided that restaurants follow the precautions we’ve outlined."