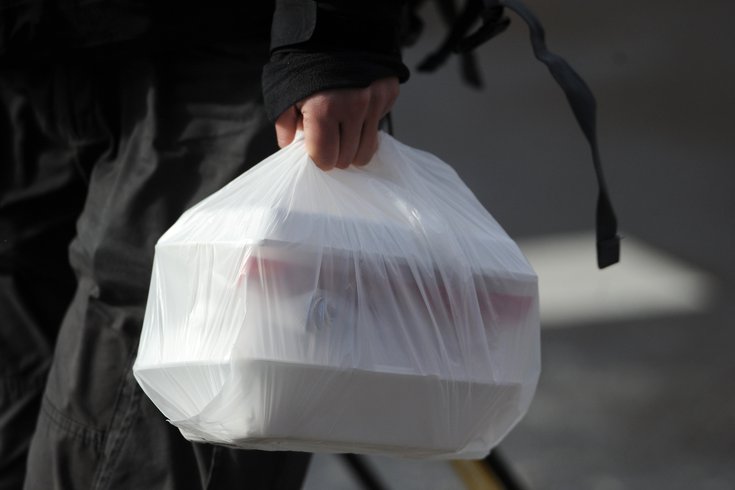 Philadelphia's ban on single-use plastic bags will be enforced starting April 1, six months after the law first went into effect.

The city will begin enforcing its ban on single-use plastic bags starting on April 1, after a six-month grace period where only warnings were issued.

The law was passed by City Council in December 2019, but its implementation was delayed several times due to the COVID-19 pandemic. It officially went into effect on July 1, when business owners were required to start displaying signs informing customers about the upcoming ban.

The prohibition then went into effect on Oct. 1, but the city provided business owners with an extended period to be in compliance. Those who don't follow the law will now face violations with financial penalties, according to a release from the Mayor's Office.

The minimum fee for those who violate the rule is $150, and each separate violation is subject to another fine. Businesses that repeatedly or egregiously ignore the ordinance could be taken to court by the city.

The ban prohibits businesses from using all single-use plastic bags, including ones made with polylactic acid, as well as paper bags made with less than 40% recyclable content.

However, there are some exemptions to the rule. Dry cleaner bags, bags customers use to bring perishable items to a register from elsewhere in a store and bags that come packaged in multiples – like trash and pet waste bags – will still be available.

Reusable bags that are permitted include ones made of nylon, cotton, cloth, polyester or another material specifically designed and manufactured to be used multiple times.

Plastic bags are also permitted so long as they're reusable, more than 2.25 mils thick and not manufactured through a blown extrusion process, which is how most single-use plastic bags are made.

Paper bags are permitted if they're made of at least 40% recyclable content and contain no old-growth fiber. They must also be labeled with the terms "recyclable" or "made with recycled content," the percentage of recycled material in the product and the manufacturer's name.

Philadelphians use nearly 1 billion plastic bags a year and officials, including Mayor Jim Kenney, see banning them as an important step toward achieving the city's climate change goals.

"As we approach the April 1 enforcement deadline, we urge businesses to make the necessary arrangements to avoid any financial penalties," Kenney said. "And we urge shoppers to bring reusable bags to do your shopping.”

Exceptions to the rule

Bags that are allowed

• Reusable bags made of nylon, cotton, cloth, polyester or another material designed to be used multiple times
• Reusable plastic bags that are more than 2.25 millimeters thick and not made with a blown extrusion process
• Paper bags made of more than 40% recyclable content which are labelled as such