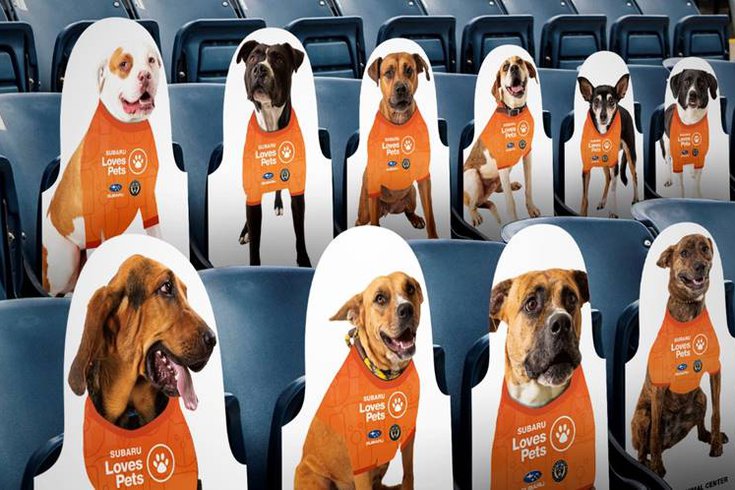 The Dogs of Ben, a group of cardboard cutouts featuring adoptable pets, can be spotted at midfield during Philadelphia Union games this season at Subaru Park.

The Philadelphia Union have found a unique way to fill the stands of Subaru Park in the absence of fans.

Cardboard cutouts of adoptable dogs from the Philly region are being placed in the seats of the Chester soccer stadium this year.

The canine supporter group has been dubbed the Dogs of Ben, a name inspired by the club's Sons of Ben fan group. The Dogs of Ben can be spotted in the midfield stands, where they will sit all year.

The Dogs of Ben are part of the Subaru Loves Pets initiative, which aims to improve the health and safety of animals across the country. Each of the dogs featured will be available for adoption from local animal shelters.

"While home games may look a bit different this year, we hope the Dogs of Ben add some fun to game day while helping to unite local dogs in the greater Philadelphia area with loving owners," said Alan Bethke, Subaru of America’s senior vice president of marketing.

Fans who are interested in adopting one of the Union’s fury fans can find more information about the dogs here. Fans can sort through the dogs by age and gender. Each dog’s name and breed is listed with a brief description of the pet’s personality.

Cardboard cutouts have become popular way to fill sports venues amid the coronavirus pandemic since fans aren’t permitted to attend games. The Phillies have filled most of their lower seating level.

The 2020 MLS season was put on hold in March due to the public health crisis. The Union returned last month to participate in the MLS is Back Tournament at Walt Disney World, advancing to the semifinals.

The MLS season resumed earlier this month. The Union played to a scoreless tie in their first game, against the New England Revolution, before defeating the New York Red Bulls, 1-0, in their home opener Tuesday night.